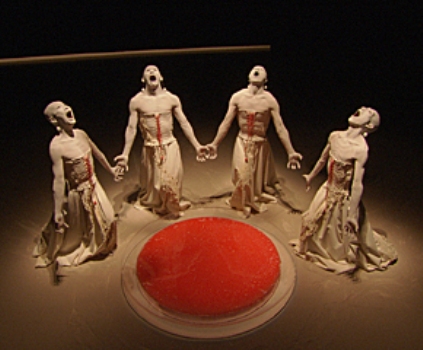 Dancers from Sankai Juku in “Hibiki”

At the edges of human potential.

Ushio Amagatsu, director, choreography and designer of “Hibiki,” offers several ways to understand and enjoy his work in a poem entitled Hibiki:
“Understanding not of words,
a resonance of fact,
through a dialogue of consciousness.”
and
“Resonance springs from tension.”

The six sections of this amazing dance work resonate on many levels. First, the visual elements of costume, lighting and set arouse references to a multi-dimensional landscape wherein human experience transcends ordinary events. Then, the six dancers, including Amagatsu as soloist, assume near perfect synchronicity in their ensemble, allowing sustained energy to flow among them and to the audience. Their movements are eclectic: very small detailed use of fingers and hands; folding and unfolding of the whole body; deep descents into the floor; and swift unexpected running and jumping patterns through space. Most of the movement is executed very slowly, but the skill, concentration and commitment of the performers demands full attention from viewers.

Amagatu’s solos, sections III (“Empty Space”) and V (“Reflection”), offer deep meditations on movement detail as he gently reaches and retracts his upper body, stretching into space and turning away. His focus is out, toward the audience, yet he is always bringing his attention back to his own space. It is mesmerizing, demanding that we, the viewers, bring our bodies into focus.

Two sections brought special choreographic pleasure to this viewer. In “Empty Space,” the dancers formed lines and groupings that were architectural in design and filled the space with changing forms as their arms reached to complete the design and then folded to erase them.

A complete costume change, from the usual lower body drape, to full skirts, bodices and earrings, gave a different dimension to section IV, “Outer Limits of the Red.” Four dancers stood beside a pool of red water and displayed a wide range of gestures, seemingly, from women’s work: sewing, kneading, dressing.

At one point, delicate feet appeared, skirts were lifted and the feet dangled near the pool, only to be shunned. Throughout this section, and almost all the others, the white faces of the performers showed meticulous, almost imperceptible response to their work.

The final section, “Resounding,” presented the most active of the evening’s choreography, complete with running patterns, jumps into falls, patterned circles and an exuberant sense of rebirth and positive resolution. The costumes for this section are amber and gold, heavenly colors. Sankai Juku, in this production, with its display of Japanese discipline and aesthetic, give us an important reflection of human potential and achievement.

The sound score is a collage of electronic and symphonic music, throughout which we hear explosions. Do those reflect the bombs over Hiroshima and Nagasaki, “the still looming shadow” out of which Butoh emerged in the 1960s?

Nevertheless, the movement and design merge with the sound. The sound technician is Junku Miyazaki, lighting by Tsutemu Tamara and the phenomenal costumes by Masaye Ituka. The dancers are Simimaru, Takeuchi, Ichihara, Hasegawa and Matsuoka.

This company has achieved international recognition. It is well deserved.

For those unable to attend the live performances, Yerba Buena offers films from the history of the companyin the screening room on Nov. 18 and 20 at 7:30 p.m. and at 2 p.m. on Nov. 21. The “Final Performance Film” of Butoh’s great star Kazuo Ohno will be shown. The films are made possible by Toshio Mizohata, manager of the Kazuo Ohno Dance Studio.

“Hibiki” Scene I: “Drop – The sinking and reflection of a drop”

A hollow, echoing sound of something dripping fills a darkened theater and stage. The sound is both music and metaphor—hypnotic, irritating, transcendent, rhythmic, nonrhythmic, haunting. It evokes attachment—the hanging onto some illusive edge suspended in time and space—and then the plunging through that space to death… or birth, falling from individual droplet to collective pool.

This individual suspension before falling through space, followed by the release into the unknown, followed by the re-emergence into something greater, is the essence of “Hibiki.” Yet, what makes “Hibiki” a masterful work of Butoh art/dance/theater is foremost the atmosphere, the otherworldly realm, that the droplet sinks through.

As the brilliant lighting design slowly illuminates a dusted stage, five nearly mummified bodies lay withered in fetal position near enormous blown-glass bowls. A few Moroccan-styled colored glass lamps drip water into these pools of glass from high above. The bodies of five men, with shaved heads covered in rice paste, begin to undulate and writhe in very slow motion.

The staging is dramatic but minimal. The Japanese-styled panel skirts that drape from naked dusted torsos are their own art and architecture. Everything from gesture to droplet—from the way black scrims close to form a cube of light at the back of the set, to the way clouds of dust float up on cue from the dancers’ movement—is stripped down to what is only essential. And, all of what is essential in “Hibiki” are the masterful creations of Sankai Juku’s founder and director, Ushio Amagatsu (even though the dancers—some who have been with the company for 35 years—participate in every aspect of production, from building sets to bookkeeping.)

In “Hibiki,” Amagatsu dances in two sections unaccompanied; he has won particular acclaim for his solo performances in addition to “Hibiki,” having been awarded the Laurence Olivier Award for Outstanding Dance Production. Using mostly arms and hand gestures during these sections, he appears to travel without moving and brings to each gesture the subtlety of a venerable teacher. Yet, both these sections don’t hold up to the level of dramatic tension seen during other movements, in part due to the generalized lighting that bleeds the attention off his movement into the broader space around him. It would seem that just the opposite lighting would be more effective here, scaling it down just to his gestures or body parts. Likewise, the music in these sections, a pre-Windham Hill acoustic jazz improvisation with a piano solo melody, seems out of place.

By contrast, its most spectacular movement—IV “Outer Limits of the Red—The body metamorphosizes into the object it beholds”—occurs when dancers converge around the rim of one of the large glass bowls, whose water is now blood red and vibrating from a blaring heavy-metal score. Dressed in white wedding gown drag with cinched corsets stained with blood and mod earrings dangling from their ears, they reach and nearly swoon into the blood-red surface of the bowl. Yet, their drag supersedes gender-bending antics, as they appear like stoic gods rather than any gender at all. As gods they look through their magic pool to the world below, both casting its fate and being amused by its foils. When in unison they open their white mouths wide to heaven all of humanity’s suffering can be heard in their mimicked silence.

Ultimately, what makes Sankai Juku one of the great Butoh theater companies of our time is this combination of stellar metaphor and superior design with equally enormous skill. When dancers repetitively go from the dusty ground in total collapse—scene VI: “Resounding – More Light!”—to leaping high into thin air, they create magical theatrical sorcery—as if a single droplet of water had leapt out of the universal pool of humanity to reclaim its individual existence.