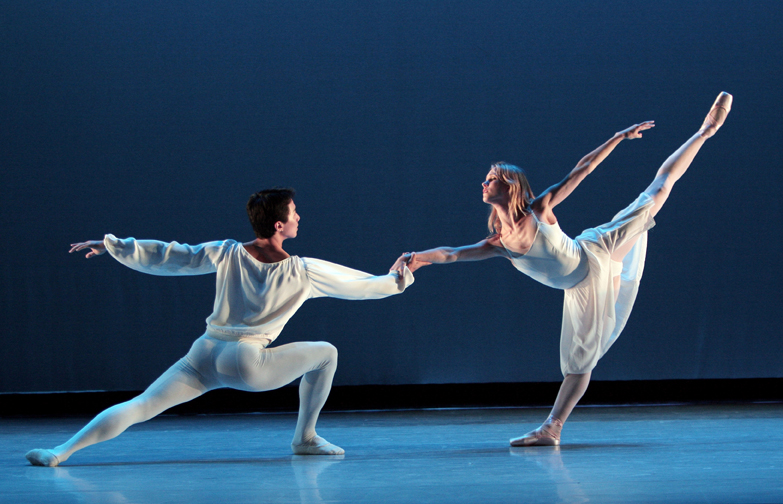 It was hard to watch the Suzanne Farrell Ballet at the final performance this year of its national tour and not say unkind things. The dancers tried valiantly to hide their fatigue, but after a week on the road, they showed the effects in their heavy landings, clunky pointe work and tremulous holds (one dancer shook so much during his lifts you held your breath for the ballerina). The recorded music, blurry and unnuanced, made for problematic entrances and exits, and cues were necessarily rushed. Then there was the nature of the programming: re-creations of dances by two late choreographers, one great and the other less so, intended to revive appreciation for their work even as it slips into the deep slumber of history.

But intentions and effect were foremost in mind during this matinee of three Balanchines and a Béjart. This mixed program followed the company’s performance the night before of “The Balanchine Couple,” a pedantic affair in which Farrell introduces each work; perhaps that encyclopedic dash through nine of the master’s pas de deux could explain why the dancers looked so tired. Then again, maybe they’re just tired of this type of program, with its mannered presentation and reverential aura. Farrell’s company,  “committed to carrying forth the legacy” of the choreographer with a grand-sounding Balanchine Preservation Initiative, has used this national tour to highlight its efforts. The result: a museum-piece approach to dance, in which remembered steps are emphasized over freshness of expression and musicality is left behind, with often leaden consequences.

That’s certainly the case with the pas d’action from “Divertimento No. 15,” one of Balanchine’s plotless classical ballets, set to Mozart’s composition for strings and two horns. Though the five women danced their solos sluggishly and at times with lazy extension, not quite managing to complete their développés, the three men looked even more listless, partnering in a way that anticipated the next movement of the ballerinas, contributing to the predictable look, and their lifts were often tentative. As for responding to the music—so crucial to this piece, for that is what Balanchine wanted it to represent, a sensitivity to the civility and decorousness of Mozart’s composition—it was clear they were counting the beats instead of surrendering to the score and letting the music take over, in the way of the most accomplished dancers. (A notable exception was Violeta Angelova, who rendered the sixth variation as a presto wake-up call to her adagio-stricken colleagues.) At their best, they achieved stateliness rather than elegance. Overall, their work suffered from staginess, as stiff as the tutus and doublets that costume designer Holly Hynes has given them.

There wasn’t a whole lot more to admire in “Contrapuntal Blues.” The short pas de deux had a requisite Apache dance feel. But Elizabeth Holowchuk and Ted Seymour exhibited little chemistry, so the jazzy steps took on a robotic look, particularly for the ballerina—which Balanchine may have intended when he created the piece on Farrell, as a way of emphasizing her versatility and underscoring the inherent automated sound of Morton Gould’s “Derivations for Clarinet and Band” (composed in 1955 for Benny Goodman and made into a longer dance by Balanchine in 1964—“Clarinade,” from which “Conrapuntal Blues” is all that survives). It was most interesting for what it suggested about another, more famous piece—the “Rubies” section from “Jewels” created in 1967—and how Balanchine was working out how to use a more vernacular style.

“Scène d’amour” from “Romeo and Juliet” was the only dance on the program not by Balanchine. For this, an excerpt from Maurice Béjart’s full-length ballet (set to Hector Berlioz’s dramatic symphony from 1839), things loosened up a bit. Farrell danced Juliet during her mid-career exile in Europe, so presumably she knows the drill. It’s an erotic piece–overtly so, in the Béjart mold. Yet, while more spontaneous-feeling than the other works on the program (thanks to the woo-hoo pairing of Momchil Mladenov and Sara Ivan in the leads), it often stumbled on its own theatricality. The piece should ache with tenderness and devotion, in accordance with Berlioz’s music, and though Mladenov and Ivan look as if they’re in love, there are moments when they fall into mannerisms and “posing.” It’s the difference between merely performing and really dancing.

Balanchine’s “Agon” completed the program and was the most challenging work, a premiere for Farrell’s company on this tour. An example of Balanchine in a modernist mode, it is full of asymmetric quartets and quirky trios; in Greek, the title means “debate” or “conflict” or even “contest,” as in Olympic games, and the three parts all have a unifying tension that bears that out. The piece echoes his “Four Temperaments” of 1940, with its angularity and interlocking poses—not to mention its difficult score (by Igor Stravinsky, also in a modernist, 12-tone mode)—although it came 17 years later. The movement Balanchine devised for his couples—sinuous and often contorted, yet always flowing—can be physically draining, and the dancers were not always up for the twists and turns, particularly with the occasional slip-up or missed cue noticed at this performance. When at last came the work’s famous pas de deux (which Balanchine said took him longer than anything he had ever choreographed because “it must be perfect”), we weren’t expecting much, and Natalia Magnicaballi and Momchil Mladenov didn’t alter that expectation. For all of the virtuosity required, they were merely competent.

Keeping Balanchine’s works in the repertory is an admirable goal. It’s also one that is being pursued by more than a few companies nationwide, from New York City Ballet (his flagship company and Farrell’s past home) to San Francisco Ballet, where Helgi Tomasson, an alumnus of City Ballet for whom Balanchine also created roles, pays homage to the master but also allows his dancers to find their own way in the works (recall last season’s “Jewels,” where principals made the “Rubies” section a fun-filled romp, alive and exhilarating). But the Suzanne Farrell Ballet has taken the mission a step further, enshrining old works with a deference that is reverential to a fault, down to invoking Balanchine’s “original vision.”

But reverence can soon atrophy into irrelevance, and all the worship can impart a creepy, haunted ritual to these re-creations, with dancers going through the motions like marionettes and not flesh-and-blood artists interpreting the work from their hearts. Farrell seems aware of this danger, and at least nods to the possibility of something novel springing from the old. “It’s almost like having Balanchine taking the reins again, working directly with The Suzanne Farrell Ballet to create something completely new,” she notes on the company’s website. Indeed, her take on the ballets is new in many ways: for one thing, she appears not so obsessed with ideal body types. Whereas Balanchine preferred long-limbed, short-torsoed, slender ballerinas and tall, lean men, Farrell’s women come in sturdier, more well-proportioned sizes (no one would ever call them “thin”). Her male dancers, too, are of all shapes, from short and solid to lanky and trim. And there’s a decidedly feminine air to her resettings, from the tenderness the women exhibit when partnered to the somewhat fey mannerisms of the men, who are not above cocking their heads and raising their pinkies.
What’s missing in her remembrance of dances past is the requisite permission every dancer needs (paraphrasing Balanchine) “to do, not think.” The key to this freedom is musicality, letting a passage fill the dancers’ bodies and letting the audience see the music as well as hear it. That’s something that can’t be achieved by a slavish devotion to the steps, which is like watching the workings of a clock, without hearing the chimes. Farrell needs to heed the steps less and the music more.

The Suzanne Farrell Ballet continues its national tour in March 2010 with performances of “Agon,” “The Balanchine Couple” and other works at the Kennedy Center in Washington, D.C., and elsewhere. For more information, consult the company’s website: http://www.kennedy-center.org/programs/ballet/farrell/tour.cfm