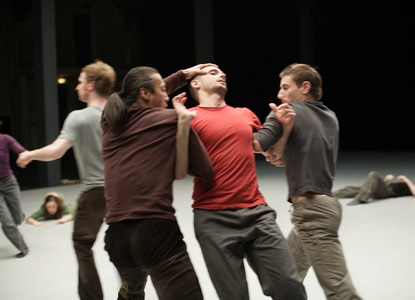 On a weekend when the San Francisco Ballet was presenting a lavish but mind-numbing production of “Sleeping Beauty”, William Forsythe, the expatriot American ballet renegade, was making a brief stop in Berkeley with a disturbing, original and genre-bashing anti-war piece, “Three Atmospheric Studies”.

Whether or not you appreciate the rawness and power of this work (which looks more like experimental theatre than dance), there is no denying that Forsythe is a genius, someone never content with tradition, physically or otherwise. The world around him, the dancers with him, the realm of obscure knowledge and research he draws from, even the scenic, lighting, sound and costume designers with whom he collaborates, all combine to create a theatrical experience that is jarring, esoteric, emotional and hard-to-forget.

Forsythe, based in Germany, spent two decades at the helm of the well-funded Frankfurt Ballet, only to lose his job in 2004 when the city fathers decided they missed the old-style ballet. Forced to reinvent himself with a much-smaller crew and partial funding from a variety of sources, German and otherwise, Forsythe’s new company, 16 dancers from as many countries, looks hand-picked for the sort of event the choreographer has staged here–a riot, literally and figuratively.

As an anti-war piece, Forsythe has brilliantly isolated a single imagined moment of conflict, and broken it into a thousand jagged bits. There is a mother, a son who is arrested, a variety of strangers, passers-by and relatives in the middle of violence; also a discussion of clouds, the Crucifixion, an Arab translator, news photos, and a soundscore that includes the use of violently percussive text. There is an "American", a female dancer playing a drawling military spokesman. There is death.

If there’s no getting used to war, there’s also no getting used to the kind of dance Forsythe has imagined for the future. This piece is a kind of mash-up of “West Side Story” and “Waiting for Godot”, yet it never crosses over into full-blown obscurity. Even in the most garbled, distorted, blasting sentences, or during a highly structured fight that doesn’t look at all like a dance, Forsythe manages to remind us that there is humanity behind every preconception, real people dying and killing, and a lot of us on the sidelines confused. He offers no answers, just a chance to watch, feel and think.