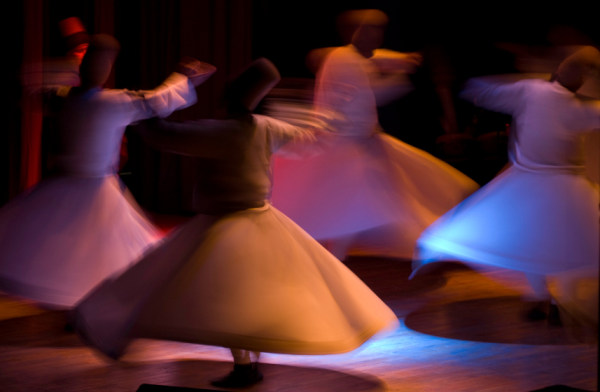 A quick look at the books in San Francisco’s Union Square Borders
history section spoke volumes. Military history occupied several
bookcases. And there below titles on European history — i.e Germany
and France — was ” other European history “, and some kind soul had
placed Anna Baltzer’s Witness in Palestine — A Jewish-American Woman
in the Occupied Territories face forward over a book in its “Holocaust
Studies ” section, which got me thinking big time. Is war and discord
all we humans can produce? And is selective memory and selective
focussing on only the dark side of human nature all we can do with our
time? And that, of course, brings us to Islam, which the media are
always telling us is inherently violent, and The Whirling Dervishes of
the Mevlevi Order of America, which the California Institute of
Integral Studies presented in the commodious blood red theatre at the
exquisite Palace of Fine Arts .

Every faith tradition contains a mystic branch.Christianity has its
monks, Judaism its kabballah, and Islam its Sufis which the born in
what”s now Afghanistan world-beloved poet and scholar Jelaleddin Rumi
( 1207-1273 ) founded in Konya, Turkey. But labelling each one as
“mystic” undermines the centrality of surrender to God, or the divine ,
which is at the root of all three. Opening speaker Hilal Sala seemed to
make this point when she quoted part of aya ( verse ) 115 from The
Qur’an’s Sura 2 — The Cow –” Wherever you turn there is the face of
God “– which , in the N.J. Dawood translation I have goes — ” To God
belongs the east and the west. Whichever way you turn there is the face
of God. He is omnipresent and all-knowing. ” Whatever the rendering,,
Sala’s point it well taken, for Sufi practice  aims at finding the
unity, or as the Buddhists would say, the interconnectedness of all
things, and its ritual music for its justly famous whirling dervish (
doorway ) dance with its highly symbolic gestures, incarnates this
perception.

Entering into the sacred space of the sema ( itals ), or whirling
ceremony, in a theatre as big as this one, was a bit of a stretch for
Western audiences who are used to being performed for, in often trivial
ways. But the full house here was completely respectful and attentive,
which helped the thoroughly focussed dancers — this is a meditative
act — bring their message across the footlights. Still it was a far
cry from the up close and personal encounter with the ritual that my
friend Charles and I had at the Mevlevi Monaastery in Istanbul the last
Sunday of January in 2006, the snow silent on the ground outside, the
male and female devotees in their white robes and conical hats
effortlessly turning in a state which was obviously grace. And I think
that we in our oh so jaded — which means worn out — world need to be
exposed to experiences like this at least once.

The nine master musicians here, especially three of the five Turkish
ones — Timucin Cevikoglu, vocals, bendir; Necati Celik, oud ( lute)
Yavuz Akalin, ney ( flute ), the rest were Americans — provided the
modal repetitive framework for the dance. Their sounds were both
monotonous — the colors, though subtle, are closely keyed — and
enthralling, and there were stretches where suddenly thickened textures
and dramatically quickened tempos gave the proceedings a visceral jolt.
We are in the world, after all, and coming down to earth can be just as
wonderful as floating on the ceiling, And Rumi certainly believed that
the here and now with its tangle of opposites, was the best place to
be, even when, ors especially when  times are hard. But aren’t they
always?

(4417)
$8.98 (as of January 23, 2021 - More infoProduct prices and availability are accurate as of the date/time indicated and are subject to change. Any price and availability information displayed on [relevant Amazon Site(s), as applicable] at the time of purchase will apply to the purchase of this product.)

(16289)
$8.99 (as of January 23, 2021 - More infoProduct prices and availability are accurate as of the date/time indicated and are subject to change. Any price and availability information displayed on [relevant Amazon Site(s), as applicable] at the time of purchase will apply to the purchase of this product.)
related posts