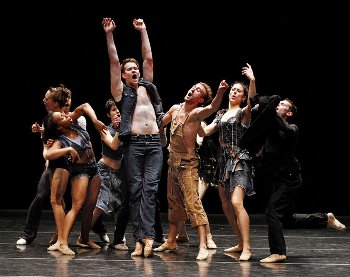 Dancers of the Trey McIntyre Project in “The Sweeter End”
Photo by Eliot Kamenitz, Times-Picayune

“Look over yonder, What do you see? The sun is a’rising, Most definitely.
A new day is coming, People are changing, Ain’t it beautiful? Crystal blue persuasion.
Better get ready, To see the light. Love, love is the answer, And that’s all right. So don’t you give up now, So easy to find, Just look to your soul, Open your mind…”

—Tommy James and the Shondells

The fairly new, Boise, Idaho-based, and rapidly acclaimed Trey McIntyre Project made its Cal Performances debut with one performance and two Bay Area premieres, “Gravity Heroes” and “The Sweeter End.” Also, on the program is an old standard (if you can consider 2007 as the distant past…), “In Dreams.”

Originally created for the Memphis Ballet, “In Dreams” indirectly pays homage to American singer-songwriter, Roy Orbison, whose music provides the emotional context for McIntyre’s signature choreography. Designed for five dancers, “In Dreams” adeptly showcases the talent of its female dancers (Lauren Edson, Annali Rose, and Ashley Werhun) who are enthusiastically vital and sharp, as they slide through McIntyre’s nearly ballet-pointe footwork and rambunctious pas de deux. All three light up the stage with both talent and presence, leaving the two male dancers (Ben Behrends and Travis Walker) without much to do, emotionally or choreographically, except to catch up with the ladies to lift them. The guys dance like hotel bellmen with heavy luggage chasing after fleeting hotel guests, lacking the confidence of their counterparts.

Still, the brilliance within “In Dreams” (named after Orbison’s hit), is that the choreography gives as much back to Orbison’s twangy, foot-stomping-blues as Orbison brings to the dance. McIntyre uses restraint with Orbison’s top-of-the-charts rock music from the 1960s, using innuendo, not cliché. Instead the choreography is unexpected—a dancer’s line is broken or twisted for effect, creating something fresh rather than sentimental or predictable. Likewise, the re-envisioned 1960s-style dance dresses by the Bisou Consortium suggest the period without going there.

Again, with “Gravity Heroes,” this same sort of finesse is witnessed when unexpectedly a grid of piñatas descends into view. The piñatas are only momentarily humorous, and quickly serve as something for soloist Brett Perry to strike out against, as they sway through space with dancers running beneath them. “Gravity Heroes” follows Perry through a series of experiences, the kind that defy gravity, resulting in transformation. Perry’s exquisite lyricism, sinewy structure, and natural intensity make him perfect for the task and for captivating audiences.

The choreography is inconsistent and wavering, coming in and out of spectacular, all of which works in its favor and mirrors the quivering vocals of Ray LaMontagne, and the uplifting nostalgic anthem of Tommy James and the Shondells’ “Crystal Blue Persuasion.”

In one titillating scene, dancers perform in Andrea Lauer’s revealing flesh toned, rubber-fetish-shorts and tops, while dimly lit background dancers sit in chairs with flesh toned balloons held in their mouths, a la art-deco figurines. When this scene/movement shifts into the next, Perry’s outfit is changed by fellow dancers downstage into the casual playful outfits of the next, signifying his new incarnation and the emancipation of the dance into its next phase. This section is the most satisfying emotionally and in the buoyant lightness of choreography, ending with Perry’s sliding off the stage and walking to a audience member in the first row with his hands outreached…. Adding to the drama of this section is a sound clip of a caged pigeon fluttering fiercely within a confined space.

The final dance, “The Sweeter End,” was McIntyre’s second collaboration with the famed New Oreleans’ Preservation Hall Jazz Band. “End” takes its lead from the improvisational jazz solos that feature one band member after another in a frenzy of musical talent and showoff collaborative interaction. While these sorts of improvisations give the appearance of being spontaneous, they are of course rooted in calculated technique. “End” however, comes off more as a long curtain call and finale rather than a breakout moment within a composition. This is true even before the company takes its curtain call three quarters of the way through, with McIntrye coming on for a bow. The curtain call is followed by more exposition by the company until the fluffy cute peeking under the curtain (bitter end?). Perhaps this impression was accentuated by its being the last dance on the program, with the choreography starting to look familiar, barely distinguishing itself from the earlier dances (with two of these dances being choreographed within the same year). By now the dancers have already established the range of their impressive talent, and the consistently flat lighting by Travis C. Richardson is doing little to help differentiate one dance from the next, as is McIntryre’s minimal use of set decor, keeping the stage looking starkly similar.

McIntyre’s choreography is fantastically innovative, captivating, and worth seeking out. The company is young and will improve as their emotional range matures and the diversity within the company expands. “Just look to your soul, Open your mind….”