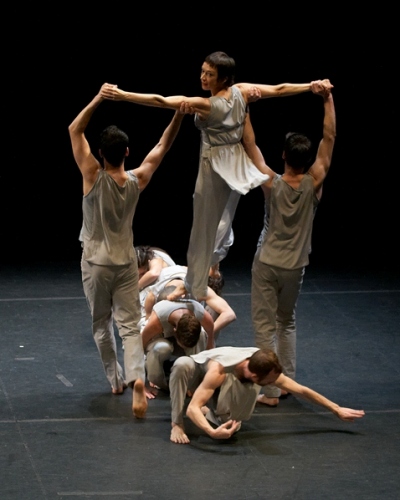 Trisha Brown Dance Company made a one-night-stand at Zellerbach Auditorium on March 15, 2013. Although we are warned to beware the ides of March, this dance company provided much to dispel all sense of gloom. Brown is retiring from active leadership, yet the works are in good form and the company is excellent.

Of the three works presented, this reviewer found “Newark (Niweweorce)” (1987) the most absorbing and demanding. In it two men stand in one place until the finale and execute the complex “release” movement so characteristic of all Brown’s choreography. Their pace is steady and thoroughly focused. Around them several women pass, never touching but forming visual and rhythmic counterpoint to the two. Tamara Riewe was outstanding in her work here and in other pieces. The dancers, who joined together in the finale, destroying for me the tension of two against the random solos, were Tara Lorenzen, Megan Madorin, Jamie Scott, Stuart Shugg, Nicholas Strafaccia and Samuel Wentz. Between the sound score events by Peter Zummo, Donald Judd’s colorful drops isolated the small groups from one another. “Newark” developed a tension and through line that other works lacked.

The opening, “Les Yeux et l’âme” (2011), danced to Jean-Philippe Rameau’s “Pygmalion,” consists of dances from the opera of the same name that Brown choreographed for various European Festivals and at the Brooklyn Academy of Music. The dancers, this time including Neal Beasley, generally stay close together, in a long center stage line, winding and rewinding themselves in to various “wrapped” positions, lifting and releasing one another. Ultimately they spread out into horizontal lines that form and reform. The relaxed easy flow of the movement is both mesmerizing and sometimes dull, although the dancers’ accomplishment in these “tasks” is always competent. The flowing costumes are by Elizabeth Cannon; the lighting by Jennifer Tipton.

“I’m going to toss my arms— if you catch them they’re yours” (2011) is Brown’s last work for the company. It employs large electric fans onstage (think Merce Cunningham’s “Tread”) that effectively blows off the white pajamas (by Kaye Voyce) worn by all. Gradually, colored leotards and shorts emerge as the dancers exit and leave the stage as if drifting through endless space. The sense of space is created onstage by opening the entire backstage area to the back doors. Although the ongoing low-energy stretch, fall, swing, release movement patterns are used, “I’m going” creates a sense of drama. The score by Alvin Curran provides some fine piano and woodwinds sounds for this wandering.

The Trisha Brown Dance Company has established a unique approach to performance and stage style. It grew out of Brown’s work in “ordinary movement,” developed with the Judson Group in the 1960s. For those requiring more tension, projection and familiar dance style, this work may be frustrating. It is however, most admirable.