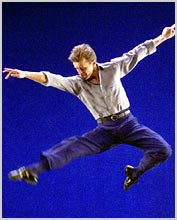 Audiences who flock to performances of the White Oak Dance Project in hopes of seeing Mikhail Baryshnikov won&#146;t be disappointed. Or will they?

The almost legendary dancer is very much in evidence with the dance group he created ten years ago with choreographer Mark Morris. He appears in just about every piece. But, is it dance?

See Misha sit on a chair. See him walk around and around in circles, take off his clothes and put them back on again. Or, dressed in coveralls, drag a variety of items onto the stage, pretending to be a window dresser, while half the citizens of Berkeley parade slowly past. There he is again, with a projector strapped on his back, sending pictures of himself up onto a screen. See Baryshnikov as a member of the ensemble where, if you don&#146;t look quick, you may not see Baryshnikov at all.

White Oak is dedicated to exploring the boundaries of modern dance. Those expecting &#147;Don Quixote&#148; or the &#147;Corsair Variations" should be warned. The current tour of the gifted seven-person ensemble is particularly quirky, focusing as it does on work done in the 60s and 70s by choreographers of the Judson School, Simone Forti, Lucinda Childs, Steve Paxton, Yvonne Rainer, David Gordon and Trisha Brown.

Caught up in the avant-garde of the period, these people made dances that pushed the envelope of modernism. Rock music, silence, minimalist movement and everyday activity were put on stage and, if people liked it, fine. If not, OK too.

The White Oak program, which consists of numerous (13 on the night of which we speak) short pieces, is a kind of retrospective of the Judson School. Titled &#147;PAST Forward,&#148; it focuses on the early work, interpolating several pieces done by the same choreographers in recent years. A videotape of interviews with the Judson School dance-makers and clips of their early work gives the context. Costuming, except in two or three dances, is non-existent, the dancers working in street or rehearsal clothes. The stage is bare, the lighting equipment highly visible. Often, film projections of the dancer&#146;s movements, projected on a screen, mirror what is happening on the stage; a device that, while effective, is somewhat over-used.

Gordon is fascinated by chairs, as is Rainer and, after seeing their work, one will never regard the lowly folding chair in quite the same way. Actually, the dancing started off with a bang as Baryshnikov danced with a chair a la Fred Astaire in a witty Gordon solo set to Sousa&#146;s &#147;Stars and Stripes Forever.&#148; The high didn&#146;t last long because it was followed by a 1975 Gordon chair piece for two women that truly did seem to go on forever. Academically interesting but anti-climactic.

Paxton likes walking. His contributions, &#147;Flat&#148; &#150; the Baryshnikov strip tease mentioned earlier &#150; and the strangely-named &#147;Satisfyin Lover,&#148; a parade of more than 30 Berkeley residents moving slowly across the stage, highlight pedestrian movement in a non-pedestrian way.

Walking, too, is the essence of Deborah Hay&#146;s 1995 &#147;Exit,&#148; a strangely moving piece, set to Barber’s &#147;Molto Adagio&#148; (from the string quartet; the later "Adagio for Strings" was based on this piece), evoking a journey from darkness into light, death to eternity, the unknown to safety, simply with a large number of people walking slowly across the stage, sometimes turning, sometimes stopping, occasionally raising a hand. Beautifully done, it had a strong impact.

You&#146;ve got to give the man credit. At 52 he still has his edge, plus the courage to explore new frontiers. He is too much of a dancer forever to be pigeonholed as a danseur. The work he is doing now in resurrecting the esoteric, groundbreaking dances of the 60s and 70s is archival and important. No less important is the creation and presentation of new work by choreographers of today. As great as he was in the ballet, his work with the White Oak Project could turn out to be a major part of the Baryshnikov legacy.