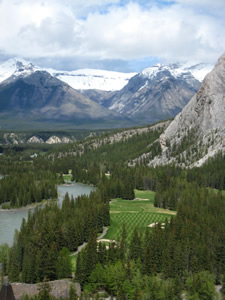 For years, I’ve lulled myself to sleep imagining I was riding in an old-fashioned Pullman car, rocking along the tracks, flying by tiny towns where only a few houses still had lights burning.

Last May, I was able to live that dream on VIA Rail’s Canadian from Vancouver to Jasper, Alberta, for the beginning of a two-week Canadian Rockies vacation. How suitable, given that western Canada, like the western United States, was opened up by the railroad.

Actually, my husband Fred and I were not in one of those green-curtained bunks, “Some Like It Hot”-style—although the Canadian, whose cars date from the 1950s, does have those. Instead, we had a double cabin—a tiny, self-sufficient compartment with a toilet, a sink, and two easy chairs which, at night, magically disappear under two bunk beds. (A shower room is down the hall.) Though suffering from a bit of genteel shabbiness, the compartment was comfortable and offered the rocking night’s sleep I’d been dreaming of.

We set off from Vancouver’s 1919 Pacific Central Station at 5:30 p.m., rolling through quiet countryside where logging and lumber mills ruled. By morning, we were surrounded by the craggy, snowy peaks of the Rockies. I found myself, as I would throughout the trip, oohing and ahhing at every turn. And by noon, we’d arrived in the little town of Jasper, in Jasper National Park, where we picked up our rental car as the train continued without us to Toronto.

We were in the Rocky Mountain World Heritage Site, composed of Jasper, Banff, Yoho, and Kootenay National Parks, and Mount Robson, Humber, and Assiniboine Provincial Parks. Jasper, at over 4,000 square miles, is the largest of the parks.

Jasper town is named for one Jasper Hawse, an early pioneer who landed there in 1813 in search of furs. By the 1890s, outfitters and guides were leading tourists into the mountains. By the early 1900s, two railway lines had been built through the Rockies, eventually merging and, in 1923, absorbed into the Canadian National Railway. We learned about Jasper’s history and natural history in the small, attractive Jasper-Yellowhead Museum & Archives, which includes a gallery of local artists and a good bookstore.

On one of the clearest days of our trip, the Jasper Tramway whooshed us to almost the top of 13,000-foot Whistlers Mountain. From there, we gawked at six mountain ranges of the eastern Rockies and tried—but failed, because of the altitude—to hike to the mountain’s top several hundred feet higher.

We used Jasper as the jumping-off place for several excursions. One was to Maligne Canyon, a deep, narrow gorge formed by the Maligne River. Another day we drove to Maligne Lake, the park’s largest and deepest. Unfortunately we weren’t able to take a boat trip to famed Spirit Island, site of a First Nations (the Canadian term for Indian) sacred spot and beloved photo op, as the lake, like many others we came across, was still partially frozen.

After our first balmy days in Jasper, we had rain almost every day, though not all day, and the temperatures were definitely on the cool side—a plus for people like myself who hate heat. Together with the frozen lakes, we considered the weather a tradeoff for the relative lack of crowds.

Another drive took us up the Fiddle Valley to Miette Hot Springs, where the waters, Canada’s hottest, are cooled down to a comfortable 104° Fahrenheit in two large hot pools (there are also two small, very cold ones). The drive was enlivened by ever-changing views of mountains, lakes and rivers. Everywhere, bright green new leaves of quaking aspen stood out as if illuminated against the darker green foliage of the conifers.

In the hot springs parking lot, a herd of big-horned sheep loitered as if they had forgotten that they are wild animals. They were the first of many sheep that we saw, not to mention a couple of black bears, deer, and female elk. Along all our drives, we of course looked out for animals, warned by the bilingual signs—everything official in Canada is bilingual—admonishing “Passage des Animaux” (“Watch for Wild Animals” or something equally mundane in English).

After a few days in Jasper, we continued south to Lake Louise along the 143-mile-long Icefields Parkway, North America’s highest road. You’d think that we could drive this distance in two or three hours; instead, what with stopping to gawk at the sights and take side trips, it took us eight, and worth every minute.

One of the high points of the drive is the Columbia Icefield (an icefield being a kind of “mother” of the glaciers that spawn out from it). The Columbia Icefield is the “mother” of the Athabasca Glacier, which you can walk up to and touch. Giant buses called Snocoaches will also drive you right on top of the glacier, but we decided against that—glaciers look better from a distance than up close. The jagged mountains, pale green rivers and lakes, canyons and waterfalls were thrilling enough—the sort of scenery for which the word “breathtaking” was coined.

Of course we did visit the modern Icefield Center, right across the street from the Athabasca Glacier, which holds a hotel and restaurant (on the top floor), an airport-like staging area for the Snocoach trips, plus gift shops, on the main floor, and an exhibit area on the lowest floor. Though some of the displays are dated—is there really still any controversy about whether global warming has human causes?—most of the historic and scientific exhibits are enlightening.

By now we were in Banff National Park, Canada’s oldest, heading south for Lake Louise.

Lake Louise is famous for its luminous blue-green color; but again, it was mostly frozen, though we could glimpse some of the color in the melted areas near the shore. The lake is an oval bracketed by the massive Victoria Glacier on the southwest end, and the almost equally massive Fairmont Chateau Lake Louise on the northeast.

The brainchild of Canadian Pacific Railroad’s general manager Cornelius Van Horn, the Chateau Lake Louise had its start in 1890. After many additions and renovations, it still has the baronial air of the kind of grand hotel that wealthy early 20th-century families came to “for the season.” It attracted mountain climbers and outdoor lovers; and when, in 1896, a climber fell to his death, the appeal of the area was only enhanced. To ensure safety (and its elite reputation), the hotel imported Swiss mountain guides, a tradition that survives today in the somewhat silly uniforms (knickers, peaked hats) that the bellmen wear, and in the hotel’s excellent Swiss restaurant—one of several—the Walliser Stube. Today, the Chateau hosts busloads of Japanese tourists, plus conferences and meetings, and the odd independent traveler like ourselves. Our room (in the new wing) was spacious and comfortable, though the noise of tour buses firing up every morning was a bit disturbing.

Lake Louise Village offers little beyond a collection of about a dozen shops and cafes, so after the obligatory walk around the lake and our realization that the weather would make major hikes a non-option, we moved the 36 miles south to Banff a day early. Banff Town has always been a tourist town. Its original locale is a thermal springs called Cave and Basin. The springs were discovered in 1883 (well—the Indians were there first) by three workers for the Canadian Pacific Railway. With the railroad completed, tourists were encouraged to ride the train to discover the beauties of the mountains. By 1887, the town already had six hotels, plus stores, churches, and a post office.

Today a national historic site and—alas—no longer a public bathing facility, Cave and Basin, with its excellent exhibits and videos, is worth a visit. (But lovers of hot springs can enjoy the Upper Hot Springs Pool, with its 104° water and killer views. It also has a day spa and a café.) Also worth visiting is the Banff Park Museum, a natural history museum completed in 1903 and left pretty much intact to serve as a “museum of museums.” Within the quaint wood building with its skylit top—the exhibits are lit with only natural light–oak and glass cases hold taxidermied animals, including not only large mammals but also hundreds of birds, butterflies, and two-inch-long shrews. There are also some curiosities—a bison leg wedged into a log; a pelican!

Of course we couldn’t miss the gigantic Banff Springs Hotel, built by the railroad and now owned, like the Chateau Lake Louise, Quebec’s Chateau Frontenac, and lots of other pricey real estate, by the Fairmont chain.

Originally opened in 1888, the Banff Springs now maintains much of the look of a 1928 remodel, plus various additions (e.g., a big conference center). With 778 rooms, seven restaurants, and, during peak season, 1250 employees, the hotel is practically a town unto itself. Whereas the Chateau Lake Louise is Swiss-ish, the Banff Springs is Scottish. We were given a tour of the hotel’s many-turreted property by a Jamaican-born guide wearing kilts.

There’s no lack of culture in Banff. The Banff Centre, founded in 1933, conducts courses and other programs in the arts, mathematics, and management, and presents concerts, films, and other events throughout the summer. We attended a trumpet concert, presented by the International Trumpet Guild, which was meeting at the Banff Centre this year.

Downtown Banff’s major streets, except for the central Banff Avenue, are all named for animals—Moose, Rabbit, Elk, Squirrel, etc.—and are well supplied with shops featuring tourist merchandise as well as high-end goodies. The northern end of Banff Avenue is wall-to-wall hotels and motels; b&bs are scattered around the town.

With its relatively citified ways, Banff was a suitable re-introduction into real life, which we reached not with another train ride but by plane, from near-by Calgary.