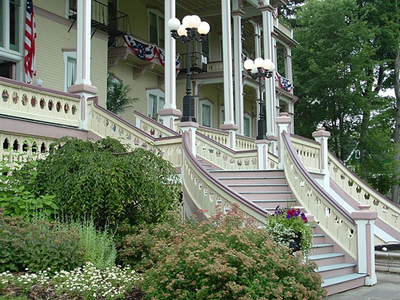 So where exactly do ex-philosophy majors vacation? May I suggest The Chautauqua Institute, where there is actually a Greek temple called “The Hall of Philosophy.” Some of the world’s most prominent intellectuals graced the temple during their daytime lectures. Just this summer alone such big thinkers such as Karen Armstrong, E. J. Dionne, Frank Deford, Joyce Carol Oates, E. L. Doctorow, Carl Zimmer, and Gary Trudeau have held council in the temple. While I was there Jane Pauley enlightened the crowd with “Talking about Mental Illness.” Ms. Pauley engaged the overflowing crowd with her humble and honest story.

And if you like a little art with your deep thoughts, you will find the performing and visual arts here in abundance as well. Just footsteps from my hotel room in the historic Athenaeum Hotel, the familiar tunes of Bizet’s Carmen, came wafting through my window ,performed by the future opera stars of the voice program,. (Technically, my room was located in what might have constituted the balcony.)

So what’s up with this place? For that answer one needs to delve into Chautauqua’s rich and unusual history. Started in 1874 by Methodists Lewis Miller and John Heyl Vincent as an experiment in vacation learning, the idea is that education is a life-long pursuit. I am happy to report that experiment is ongoing. Amazing things have happened there: FDR gave his famous “I Hate War” speech there on August 14th, 1936, Bill Clinton practiced for the 1996 debates there; nine presidents in total have made through way through the Chautauqua grounds. You could spend hours holed up in the archives reading about all the famous people and events that took place there, or just walk around and see what’s unfolding that moment, like a ballet rehearsal where students are practicing Balanchine’s masterpiece, Stars and Stripes, for the first time, or take a tour of the inside the organ, or a walking tour of the scale model of Biblical Palestine on the lake shore.

Heavy thinkers like to combine relaxation with learning, and Chautauqua is just the place to do it. With a nine-week summer season organized by such timely themes as “The Ethical Frontiers of Science,” “Healing the Globe,” or “Restoring Legitimacy to our Election System,” there is much to keep the gray matter engaged. Day time lectures and night time performances are a daily adventure.

Under the direction of Jean-Pierre Bonnfeaux, ballet flourishes at Chautauqua. With one of the most competitive programs in the country, you can expect frequent performances throughout the summer. Resident professional companies, The Chautauqua Dance Company and North Carolina Dance Theater, perform throughout the season.

As to where to stay and how best to visit, that’s entirely up to you. Come for a day, pick a week that matches your passions, or heck, stay the whole summer. As to where, your choices are boundless, from a modest B & B to the the elegant Athenaeum, the first hotel to have electricity. Apparently Edison delivered his invention himself.

So suppose you are a serious thinker traveling to a more traditional (read: loafer) vacationer. Not a problem; there’s golf, boating, sunbathing, shopping, a spa, and plenty of places to just park your body, stare into the sparkling lake waters, and let others contemplate the big questions of our time.