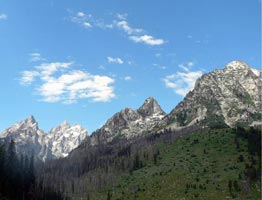 Most of my travel in the last several years, aside from family commitments, has been accompanying my husband to technology or venture capital conferences in European cities. Berlin, Seville, Oxford, London and Cannes were all interesting and exciting; don’t get me wrong, but the long plane rides, the jet lag, the fancy evening events and the sightseeing rituals had all paled.

I’ve always assiduously avoided playing the game of ‘I’ve traveled to more godforsaken places than you have.’ You know what I mean: you’re at a dinner party when, in a stilted segue, one diner manages to allude to his latest trek to Bhutan or Bataan (the place is actually irrelevant, so long as it is an expensive and difficult journey to a place he is certain none of his peers has been). Then he waits with a slight smile on his face for the oohs and aahs he is certain will be forthcoming.

So over lunch at a local diner one day, when my husband and I sat back and thought about where we really wanted to travel next, I suggested that we visit the Grand Teton National Park. Though I’ve spent time in the Rockies, the Sierras and the Alps, I had never seen the Teton Range. I had read about the Jenny Lake Lodge and thought a vacation there would be the perfect antidote to my husband’s business related travel. And it was.

As soon as we landed at the Jackson Hole Airport, and saw the dramatically beautiful mountains, the large expansive valley and the clear blue sky, we knew we had come to the right place.

The Grand Teton National Park in northwest Wyoming (http://www.nps.gov/grte/) is in a 6,500 foot high, 26 mile-wide valley with the Snake River meandering through it. The dramatic high peaks of the Teton Range rise another 7,000+ feet from the valley and run for about 40 miles. And that’s all there is…between the short, very easy ride from the Jackson Hole Airport to the Park and throughout the Park there are no billboards, no fast food places, no dilapidated motels… no nothing… just the mountains, the river, the sagebrush and the wildflower covered valley and abundant wildlife. That’s because, starting in the 1920s, as part of a plan to preserve the valley, John D. Rockefeller, Jr., bought up 35,000 acres of land, demolished all the then existing tacky buildings and ultimately donated the land to the National Park System. There was a 30 year fight among the State of Wyoming, the Feds, the ranchers and the conservationists over the valley’s use and development. It was not until 1950 that all disputes were resolved and the Park reached its current 310,000 acres (485 square miles).

The Jenny Lake Lodge ( http://www.gtlc.com/reserv.aspx; 800-628-9988) consists of only 37 rustic yet elegant log cabins and they are very much in demand. Most guests come yearly and the Lodge’s occupancy rate averages above 90% during its short June to October season. I called for reservations in early March and was willing to stay for any five day or longer period in July. Happily, a cabin, Elderberry, part of a newer duplex (it shares one wall with a neighboring room), with a king bed, soaking tub and refrigerator was available.

The rate is about $500 per day and includes a bicycle (coaster-brake cruisers), horseback riding (we liked the morning ride around Leigh Lake) and a full breakfast and dinner. Our five course dinners were surprisingly sophisticated yet healthful meals, with a daily vegetarian alternative. There are five revolving dinner menus, so that on your sixth night you’ll recognize the menu from your first night. There are also daily specials. Jackets for men are requested and were worn by about half the men in the dining room. The wine list is extensive. Unfortunately, the full breakfast (same menu daily) ends at a too early 9:00 AM; a light continental breakfast was available until a still too early 9:30.

Jenny Lake Lodge has no TV, no internet access and no cell phone service. We were initially worried that we would have information withdrawal symptoms, but the New York Times and USA Today are available daily. The overly developed and overcrowded Jackson Lake Lodge, about a half- hour’s ride up the road from the Jenny Lake Lodge, has free wi-fi in the lobby and cell phone reception, so we got our fix in. Also, we brought some DVDs with us and played them on my laptop before bedtime.

The service was quiet and efficient. Our room was made up each day while we were at breakfast and turn-down service occurred during our dinners. The front desk gave helpful suggestions about activities. However, the printed ‘Suggested Gratuities’ note in our room recommending tips of $6 to 10 per day for the front desk, the same amount for the maids and for the horse wranglers, seemed to be a surprising gaffe.

We hiked every day. The best hike was the four and one-half -mile Taggart Lake-Beaver Creek loop. There was enough of a climb to make it interesting, the trail was empty and the scenery was lovely. The seven and one-half mile hike above and around Jenny Lake and up to Hidden Falls and Inspiration Point (great views) was also a good hike, but because there is a ferry across the Lake allowing flip-floppers to reach Hidden Falls fairly easily, the trails near the Falls were crowded. Hiking around Leigh Lake and String Lake had lovely wildflowers and was very pleasant. The three mile Heron Pond and Swan Lake hike at Colter Bay was a bit flat and boring.

We also biked every day. There is a one-way scenic road with a bike path near the Lodge that formed a nice six mile ride that was perfect for the cruiser bikes. One afternoon, a black bear and her cub suddenly appeared from the woods and crossed the road right in from of us. We also rented mountain bikes at Dornan’s, a small commercial area in a hidden valley just outside the Park. We were told about a nice 12 mile loop starting at Antelope Flats that cut through the unpaved Mormon Row. ‘Watch out for buffalo,’ was the store clerk’s parting advice. Observing the buffalo graze behind fences along the quiet and picturesque Antelope Flats Road was interesting, but then we saw that about 40 of them were sunbathing at a stream in the middle of Mormon Row. We got about to within 20 feet of the herd, but when they didn’t seem happy to see us, we quietly withdrew. Note to the uninitiated: we later learned that the recommended safe distance from buffalo is at least 300 feet.

Our stay went by too quickly, and we never left the grounds of the Park. We never made the 12 mile trip to Jackson. We never took the three hour round trip drive to Yellowstone National Park. But we still have a list of things we’d like to do next time we visit the Park (and there will likely be a next time):

• Take mountaineering classes at the Exum Climbing School
• Look into taking oil painting classes (we noticed a group near String Lake)
• If the water on the Snake River is running faster than it was this summer, take a white water raft trip
• Take some longer more strenuous hikes
• Go kayaking on Jenny Lake.