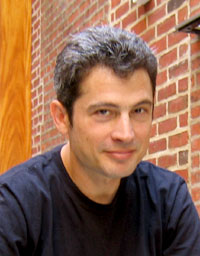 The Academy of Vocal Arts’ Ghenady Meirson
was musical director of the program.

The Academy of Vocal Arts December Russian Romances program is always one of the hottest opera tickets around not only because there isn’t a carol or sugarplum in sight, but because of the chance to hear almost all of the resident singers at AVA. The musical director Ghenady Meirson, born in Odessa, is at the piano and is a master of the Russian repertoire.

Tenor Viktor Antipenko gave full performance to Rachmaninoff’s “Arion” as the wretched captain who didn’t go down with his ship but lived to sing about it. Antipenko, a second-year resident, admirably keeping the power of his voice in check for character. Jan Cornelius struggled a bit on the tempo-tricky Rachmaninoff aria (“How Fair This Spot!”), but caught the wing midway through, bringing it to stratospheric beauty. Ryan Kuster’s very fluid bass just nailed the dervish comic vocal spikes of Anton Rubinstein’s “Demon’s Aria.” At the other end of the spectrum and equally thrilling was the stirring drama of mezzo Margaret Mezzacappa on “Field of the Dead” from the film score “Alexander Nevsky” by Prokofiev.

Twenty-seven singers weighed in with rare selections from the Russian, though predictably Tchaikovsky-dominated, evening. Baritone Alex Lawrence, who got raves as the dastardly doctor in “The Scarlet Letter” last month, was equally strong with the heartfelt power on “Trembling Tears”; his “Scarlet” co-star, Olivia Vote, was captivating on “During the Ball.” John Viscardi had a tentative moment for “Why?” but there is no doubt that he commands a gold-standard tenor. Nicholas Master exhibited a lush lyric bass on Gremin’s aria from “Eugene Onegin. Cynthia Cook was also in great voice as Joan of Arc from “The Maid of Orleans,” making it an ariatic meltdown, even wearing a smoking opera dress and Marilyn Monroe platinum flip.

The best was saved for last with two full scenes: Zachary Nelson as the passionately bitter lover in Tomsky’s ballad from “Queen of Spades” and Corinne Winters just pouring herself into the letter scene from “Onegin.” As much as the evening belongs to the singers on this program it was just as much Meirson’s accompaniment that framed the evening’s dimension and theatricality.