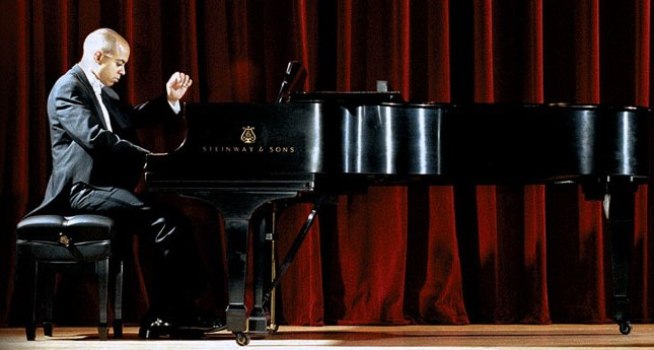 New Yorker James Gaffigan has been associate conductor with the San Francisco Symphony and the Cleveland Orchestra and was named last year chief conductor of Lucerne Symphony and principal guest maestro with the Netherlands Radio Philharmonic. He was on the East Coast this month with The Philadelphia Orchestra, essaying a strong program of Bernstein, Gershwin and Tchaikovsky. It may seem like well-worn rep, but smart proving ground territory here, based on the reception at solidly sold house.

Trumpeter David Bilger’s noir solo from Leonard Bernstein’s Symphonic Suite from the film “On the Waterfront” stated the themes— distinctions in the dissonance on the edges, and restraint in some of the effects that build Bernstein’s sonic metroscape. This piece can easily be phoned in, because of its cinematic dimension that completely satisfies, but Gaffigan and the musician go for more. And musical respect in the detailed jazz elements as opposed to jazzy, italicized ornamentation. Gaffigan also knows how to equalize, making its explosive climax connected to the narrative, a bit overwrought in the fortissimo, but by the end you couldn’t help but see Terry Malloy (aka Marlon Brando) walking bloodied up that ramp to defeat the bosses.

Both overt and understated drama followed with pianist Stewart Goodyear’s immersive performance of George Gershwin’s “Rhapsody In Blue,” in the original 1925 arrangement by Ferde Grofé, reflecting the composer’s initial imprint. Goodyear also accented the rougher jazz voicings, instead of making them silky as often happens; again, Gaffigan did not blunt the jagged orchestral angles.

Goodyear’s entrance stated his supple relationship with the orchestra and though he was Oscar Levanty in moments, he was completely inside this interpretation of the “Rhapsody.” All of the solo density had diamond clarity and the orchestral interlocks had Gershwin authenticity written all over them. The pianist exhibited his trademark arrests (which he handles just as masterfully on Beethoven’s “Hammerklavier”). Gaffigan was able to show his obvious interpretive strengths, with glittering intensity with the rest of the orchestra. Not to be outdone, rightly, is Ricardo Morales’s firebird clarinet.

Gaffigan closed with episodes from Tchaikovsky’s “Swan Lake,” and it is always instructive to hear ballet scores play onstage rather than the pit. One immediate advantage that instantly played as strength were the robust tempos, sans dancers. On the downside, there were long pauses between some of the segments, indicating that it may have been under-rehearsed, but the choppy flow was more than compensated for with the vibrancy of the mise-en-scènes — highlights were the in the divertissements of the mazurka, Czardas Hungarian and Spanish dances that were well characterized by the musicians. Among the standout players in this performance, Elizabeth Hainen’s radiant harp and David Kim’s fine line violin, hovering over the dramatic waters.