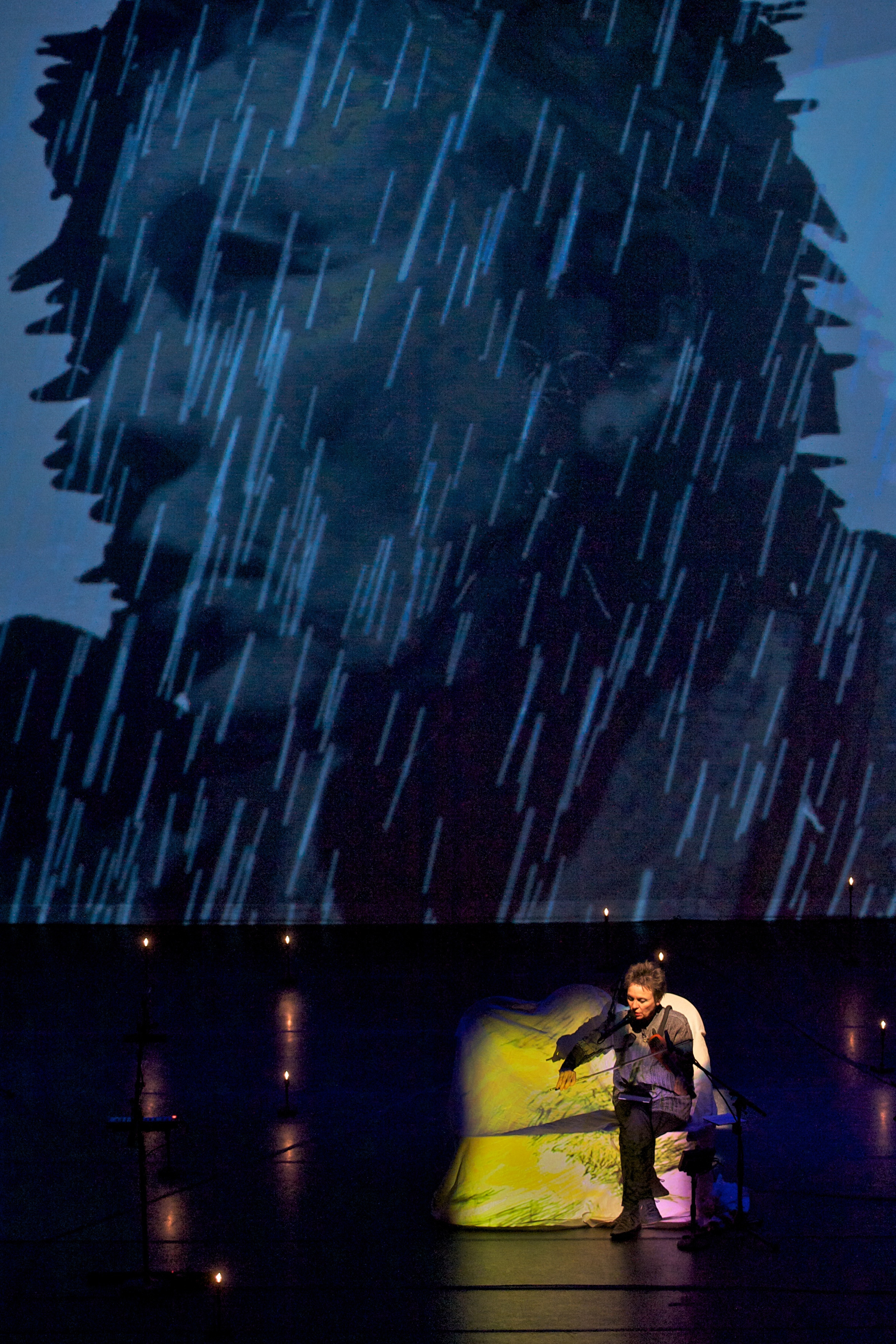 Laurie Anderson’s universe is 62 years old, witty as ever, intelligent, politically aware, conscious of its own demise, capable of giving birth to a dog from a human womb, perpetually intrigued by language, technology, and whether or not her mother really loved her.  It’s a universe that spends time pondering the last time someone will call its name, “who will own the moon,” and what last words will be uttered before one turns to dirt.

What “Delusion” delivers is the thorough revelation of that universe through hip and artfully crude video projections that illuminate various surfaces and shapes, and through Anderson’s own natural — albeit stylistic — voice, with its iconoclastic pauses or, as its computerized vocal distortion, or “audio drag” alter-ego persona Fenway Bergamot.

“Delusion,” which premiered at the 2010 Winter Olympics and was sponsored in part by Cal Performances in Berkeley, was inspired by a series of vivid dreams, family history and a heady group of short mystery plays.  It contemplates passages of time — the out-of-time dreams and the all-too-measured time of death, specifically Anderson’s mother. “I was thinking of you, and then I wasn’t thinking of you anymore,” she muses to a sympathetic, gray-haired, Baby Boomer, clock-ticking, hip art/theater crowd.

At times, “Delusion” bogs down from the weight of emotions that precedes true feeling, rather than its topic of death as time. Anderson admits her ambiguity that surrounds her mother and how that represented her mother’s passing. She then reflects that frozen emotion by showing a dreamlike projection of her dead mother lying on the floor with a sequence that drags on longer than necessary.  By comparison, fleeting brilliant vignettes, like the rain sequences when Anderson’s live image is projected onto her graphically projected silhouette as she poetically speaks alive, are poignant and could have been stretched out longer.

Accompanying Anderson’s electronically augmented violin, with its various filters that create different harmonics and overtones, is the dynamic saxophone playing of Colin Stetson and Dan Weiselman — a one-up collaboration in the Bay Area only.  This inserted collaboration, along with Anderson’s inclusion of up-to-the-minute socio-political commentary, is unique to “Delusion,” allowing for a low-risk improvisational aspect to her highly controlled performances.

Baby Boomers can’t help but want or expect Anderson’s to do the unplugged version of “Oh Superman” for her encore — but, in fact, the piece performed with her two mighty horn players was by far the most engaging and melodic music of the entire performance.