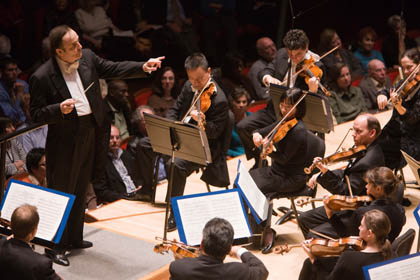 The last night of the Philadelphia International Festival of the Arts attracted thousands of people, who wrapped around the Kimmel Center to view the aerial show that was happening on a spacy metal oval that morphed into various shapes and was the apparatus for acrobats and percussionists, wowing the crowd.

Inside, Charles Dutoit was back on the podium with the Philadelphia Orchestra for a Stravinsky program that was equally captivating. Dutoit has missed dates recently due to illness and this was his first appearance since the ominous news of the orchestra’s bankruptcy two weeks ago. But Maestro Dutoit strolled on stage with his usual authoritative poise and reminded you how much of a stabilizing presence he has been with the orchestra in the last couple of years.

And that stability was certainly evident in the strings as the players rippled musical muscle in Stravinsky’s “Apollon musagète.” This is a masterpiece twice over because of Balanchine’s brilliant choreography, and it was hard not to envision those dance images of Apollo summoning the three muses, evoked with such dimension and clarity by these players. And lead violin David Kim never sounded more virtuosic as he interpreted with subtle accents, slicing trills or note bends. Likewise Dutoit, as he deftly sculpted the drama with a shimmering surface aloft on the deepest sonority among the cellos, violas and basses.

Stravinsky’s “Oedipus Rex” proved a little trickier, and there may be more than one reason that this work is rarely done. This “opera-oratorio” tells the sordid and bloody tale of incest, murder and eye-gouging in scene “blocks” of narrative and music, with five principal soloists as the characters. The libretto by Jean Cocteau, translated into Latin by Jean Danielou, is dizzyingly speedy tragedy. The very difficult solos rely, like the narration (performed in English), on mannered characterizations that can border on, by now, musical parody. The excellent David Howey as the English narrator doesn’t back off in the style of a Greek orator’s intensity.

The singers follow suit with mannered performances and mixed results. Paul Groves as Oedipus skated dissonance and seemed outsized in his initial oratorical bombast. But when he started to layer in character (and opened his voice), he was very effective. Mezzo-soprano Petra Lang as Jocasta seemed to struggle to get past one dimension (paging Dr. Freud), owing in no small part to Stravinsky’s barky passages; ultimately she remains a stony monster. David Wilson-Johnson as Tiresias, like the leads, seemed to (admirably) keep to a very technical approach, but perhaps indicating not enough rehearsal time, put an interpretive stamp on the role.

In contrast, Robert Gierlach played Creon, and the basso messenger’s vaporous endnotes worked beautifully in his dramatic expressiveness. No vapor in any of the choral sections, with the men of the Philadelphia Singers Chorale (directed by David Hayes) just a thundering Greek chorus, imploring the gods and mortals, in no less than Olympian proportions.