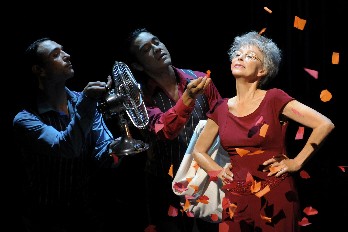 Rita Moreno in a scene from her show at Berkeley Rep
Photo courtesy of kevinberne.com

Legendary performers still going strong on the American stage scene? Let’s see, there’s Angela Lansbury and Elaine Stritch and Barbara Cook and … Rita Moreno. At 80, recently widowed and with a new hip replacement, Moreno still is tap-dancing, singing and joking her way into audiences hearts, just as she did years ago on “Sesame Street” and “The Electric Company” and in films like “West Side Story.” OK, maybe a little slower but, despite the gray hair and glasses and especially in a form-fitting red gown donned near the end of her show, she sure doesn’t look like anybody’s grandma.

Except she is, and a doting one. Maybe here is the place to insert a little full disclosure. I happen to know Rita Moreno and, in real life, she is the same funny, forthright, down-to-earth dame you see on the stage. “Life Without Makeup,” the subtitle of her new show at Berkeley Repertory Theatre is pretty apt. Scripted by Berkeley Rep artistic director Tony Taccone, it’s a memoir, not only about show biz, though there is plenty of that, but about a little girl from the barrio who made it to the top (Moreno is a triple crown holder: Oscar, Tony and Emmy—and she has a Grammy as well) on her talent and determination.

Ironically, although she has traveled far, Moreno seems never to have totally escaped the barrio. For years she was cast in ethnic roles – Latina, Polynesian, even the Siamese concubine of the King of Siam, her breakthrough role in “The King and I.” You can hear the residual bitterness this engendered frequently in the show. We first meet the five-year-old Rosita (the studio will later change her name), uprooted, frightened and friendless except for her beloved Mami—a survival-driven woman determined to carve out a better life for herself and her daughter—on the storm-tossed crossing from Puerto Rico to New York. We follow her through years of tenement living, loneliness, dance lessons and movie star worship and then fast-forward to age 17 when she is discovered by Louis B. Mayer of MGM and whisked off to Hollywood.

There we witness early success and a string of disappointments, long passionate romances and brief flirtations, the requisite suicide attempt (quickly glossed over) and the comeback. Finally, little Rosita lands on her feet, goes onto the Broadway stage and meets the man she will marry. A nice Jewish doctor, every mother’s dream, unless your mother happens to be a Puerto Rican bombshell who has gone through some four husbands herself. It’s all there, salty and unvarnished.

And much too long. For this, one must fault Taccone. Moreno’s life is indeed interesting but it’s no “War and Peace.” At two and a half hours, the evening might be improved by some cuts.

Although it is a virtual monologue, broken up by musical numbers, Moreno and her honesty are not alone on the stage. Two talented dancers, Ray Garcia and Salvatore Vassallo, back her up and, in a very funny segment from “The Ritz,” actually steal the scene. Cesar Cancino and a small combo ably provide the music and clever video projections (by Alexander V. Nichols, who also did the lighting) show us everything from the Statue of Liberty to the brooding eyes of Brando. Annie Smart did the costumes; the choreographer is Lee Martino and David Galligan directs.

On the way out, I overheard some people wondering whether the show would go to New York, as many Berkeley Rep premieres have recently done. I doubt it. It is entertaining but too slight. Moreno lives in Berkeley, is a local favorite and should sell out at the Rep. Then again, I could be wrong. The show may not “have legs,” but Rita Moreno sure does.