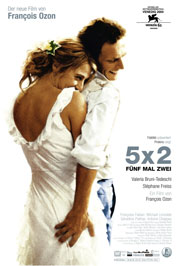 Francois Ozon’s 2000 film, Under the Sand, is a thoughtful work that examines themes of aging and loss with a depth and maturity that belies the then-youthfulness of its director. But in subsequent outings Ozon went astray. The 2002 musical 8 Women is a precious and overwrought effort and the 2003 drama Swimming Pool starts out as a fine character study, but lapses half-way through into muddy plot-overdrive.

With 5X2, Ozon gets back on track, delivering a character-driven film that examines a marriage by starting with the divorce and working back sequentially through time to four earlier stages: a dinner at the couple’s home with the husband’s gay brother and his lover; the birth of their son; their wedding; and their first meeting.

Putting the divorce up front announces the failure of the marriage. Working back from there forces a focus in each episode on the seeds of failure, even as each earlier period seems to be a somewhat happier one than the later-in-time, previous segment. Ozon lingers over the lawyer’s recitation of the terms of the divorce as the couple sits grimfaced, numbly absorbing the details of their agreed-upon arrangements. They then end up together in a hotel room, a situation that Ozon does not clearly motivate. But he uses the scene powerfully to illuminate the boorish selfishness and emotional unavailability of Gilles, the husband, and the passive submissivenes of Marion, his wife.

The dinner party scene also provides a demonstration of Gilles’ obtuse insensitivity, while the gay couple and their relationship provide a foil to that of Marion and Gilles. Similarly, Gilles is noticeable for his absence at the difficult birth of his son; in this episode, Marion’s parents provide yet another relationship for contrast. The wedding scene is full of appropriate joy and hope, while the wedding night, which, if seen first, would come as a bit of a surprise, reflects once again the behavioral patterns which have been demonstrated earlier in the film (later in the chronology). Even the initial sequence of their romantic first meeting is tinged with compromising circumstances. Ozon makes an ironic statement by using romantic pop songs between the segments of the film, playing their sentimental idealism against the less sanguine realities.

As Marion, Valeria Bruni-Tedeschi (Those Who Love Me Take the Train) anchors the film with a performance that offers both complexity and remarkable emotional transparency. At crucial moments, Ozon leaves the camera on her face as she wordlessly reacts; the movement of her eyes, the set of her mouth, virtually every muscle of her face are all subtly engaged in the expression of feelings. Stephane Freiss makes a handsome, caddish, and brittle Gilles.

There’s a wealth of incident and detail in these five episodes that actualizes a multi-leveled view of both the characters and the dynamics of their relationships. It might be asked whether the reverse-time approach was necessary to the accomplishment of that purpose, whether there’s sufficiently added payoff to justify the gimmicky structure. Ozon doesn’t need gimmicks. He’s a gifted filmmaker, but there’s a sense that he doesn’t yet have the confidence to proceed in a straightforward, unaffected manner.