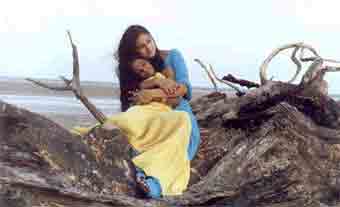 Bollywood, the popular name for the film industry of India, shows the influence of Western films, certainly, but is unique in its forms and style to its own culture. Characterized by lavish productions and sweeping epic melodrama interspersed with popular songs, it has, thus far, failed to make inroads in the United States market. Lagaan, while garnering a 2002 Academy Award nomination, came and went from American distribution with barely a ripple. Mira Nair’s Monsoon Wedding, released in the U.S. in 2002, did better financially, but it is more a Western film with Bollywood influence than the genuine Bollywood article.

Now making the rounds of the film festivals is A Peck on the Cheek, by star Bollywood director Mani Ratnam. Ratnam is credited with a dozen and a half films, yet none of his films has been released commercially in the United States. With some critics writing about a trendy return to melodrama (Far From Heaven, Talk to Her), perhaps the the time for Bollywood in the American market has arrived.

And make no mistake about it, A Peck on the Cheek is melodramatic to its core. With a determined lack of irony, it tells a highly romanticized story of abandonment and reunion, directly played for an emotional response with–in true Bollywood style–schmaltzy pop songs interspersed to heighten the unabashed, unapologetic sentimentality. At the same time, the production values are extraordinary and the performances are sufficiently expert to win over anyone with the slightest receptivity to a good tear-jerking wallow.

In a prologue preceding the main titles, Shyarma (Nadita Das), a young wife, is separated from her husband due to the civil war in Sri Lanka. In a Red Cross refugee camp she gives birth to a baby girl. The main story begins some years later in Chennai (formerly Madras), the home of Thiri (Madhavan), a writer, his wife Indra (Simran — Bollywood stars have taken to single names, like Cher), a television news reporter, and their three children. The story stops for a major production number with a huge chorus of kids all in red gingham-checked shirts. The song effectively introduces the heroine, young Amudha (P.S. Kirthana), eldest child of Thiri and Indra. On her ninth birthday, her father reveals to her that she is adopted. Deeply upset, the girl notes that her skin is darker (skin shades are referred to more than once in the film) than his. "Did you find me in a dust bin?" she asks unhappily.

In a long flashback, Thiri and Indra’s backstory is told and yet another major production number deals with the mother-daughter relationship, with the two of them in saris of turquoise and saffron yellow, photographed in sweeping aerial shots along a wide white beach. Amudha runs away, seeking her blood mother; when her parents find her, they go together to Sri Lanka in search of Shyarma. Director Ratnam pulls out all the stops with bombs exploding, guerilla ambushes, and long processions of refugees miserably leaving their war-torn towns. The reunion takes place in a park as a battle is waged on all sides and, finally, there’s a cleansing rainstorm that neatly parallels the rivers of family tears.

As is expected with melodrama, the characterizations are stock and the emotions predictable. But on its own terms A Peck on the Cheek works. The acting breathes life into the characters and the narrative drive is (mostly) well sustained over the two and a quarter hour length of the film. Ratnam, who also co-wrote the screenplay, even manages to get in some pointed lines of anti-war politics ("Those who make weapons have a commercial interest in war.") which give the film an added resonance for an audience troubled by the current conflict.

(15671)
$4.87 (as of January 21, 2021 - More infoProduct prices and availability are accurate as of the date/time indicated and are subject to change. Any price and availability information displayed on [relevant Amazon Site(s), as applicable] at the time of purchase will apply to the purchase of this product.)

(20925)
$3.61 (as of January 21, 2021 - More infoProduct prices and availability are accurate as of the date/time indicated and are subject to change. Any price and availability information displayed on [relevant Amazon Site(s), as applicable] at the time of purchase will apply to the purchase of this product.)
related posts