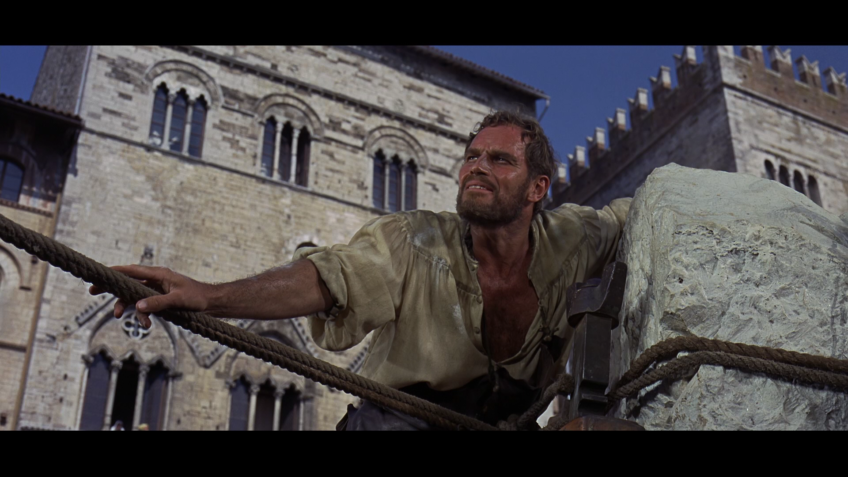 You know a film is not that good when the best contemporaneous review one can find of it was from the notoriously bad New York Times film critic Bosley Crowther. Who was Bosley Crowther, you ask? Well, he was the Roger Ebert of his day. That is, he was the most famous and influential film critic of the mid-Twentieth Century. He differed from Ebert, though, in that a) he could not write well, and b) he had a complete lack of understanding about the art of cinema. Having said that, he was smack on about the 1965 yawnfest, from journeyman director Carol Reed, “The Agony And The Ecstasy.” The film starred Charlton Heston, but it pales, significantly, in comparison to other of his 1960s classics, like “El Cid,” “Major Dundee,” or” The Planet Of The Apes.”

‘No matter how much one may goggle in absolute wonder and awe at the creation of the Sistine Chapel frescoes, so ingeniously and magnificently represented in this huge color film, and no matter how much one may work up a certain historical respect for Michelangelo, the major if not the only feeling aroused by this more than two-hour work is one of sympathy with the mounting impatience of the Pope….He is forced to wait while Michelangelo commences and pursues one design and then, dissatisfied with it, destroys what he has done. He is forced to wait while the painter takes off to the Carrara Hills, there to cut marble in a quarry and commune with his troubled soul….No wonder poor Julius is driven to annoyance, impatience, despair and finally to violent papal anger as the work goes on and on. With all due regard for the artist, the viewer is driven to anger, too. “When will you make an end?” The Pope-shouts often to the man on the scaffold above. That is a question the viewer feels like shouting at the makers of this film.’

For, despite the technical brilliance of their designs and photography, including a stunning replication of the Sistine Chapel done to scale; despite the evident reverence with which they have gone at their task and an interesting, quizzical performance by Rex Harrison as the Pope, they have labored too long and too closely over an incident in art history. They have produced not a strong and soaring drama but an illustrated lecture on a slow artist at work.

That is the fault, in the first place, of Philip Dunne’s wordy script, based on the equally wordy but more theatrical novel of Irving Stone. With no roots or romance in his story and only that conflict between artist and Pope, he gives us a pseudo-personal drama that is as impersonal and emotionless as glass….And, secondly, Charlton Heston’s acting in the role of Michelangelo is arrogant, agonized and cranky without a glimmer of ecstasy or warmth….The most absorbing thing in the picture is the illustration of how the artist transferred the line drawings from his sketches to the ceiling. That gives you a rough idea.

Usually Crowther bloviates. But I suspect the poor old bastard was just plain bored silly when he wrote these words. The DVD of the film presents the original opening of the film, a 12 minute long (of a 138 minute long film) yawn of a pseudo-documentary about the then traveling global Michelangelo exhibition. The opening is so bad that I was tempted to begin this review by stating that the opening was The Agony, but then the rest of the 126 minutes was no Ecstasy, so that snide attack was thwarted. Let me try this: the film, based upon Irving Stone’s best selling novel, should have been called “The Agony An The….Yawn.” Well, that’s not much better, so you see why I opened with the Crowther gambit (yea me!).

But, there really is nothing to the script but Rex Harrison, as Pope Julius II, bloviating, and Charlton Heston, as Michelangelo, acting like the Holy Father’s personal bitch. Ok, why the snarky aside into homosexual bondage lingo? Well, let’s see, Michelangelo was one of the more renowned homosexuals in history (not only is his art is laced with homo-eroticism- and not using the Platonic affectation that William Shakespeare did, but in letters as well, as opposed to the clearly affected Younger Man sonnets of Shakespeare), but you would not get that from Heston’s portrayal, Instead of the quiet, introspective, dark, hairy, little Mediterranean man, we get the brawny, WASPy, blond Heston as….”Macho-Angelo! ” Ugh! I think Heston is one of the more underrated actors in film history, especially in the Leading Man category. But he is so wrong, in so many ways, to play Michelangelo that, I guess, I can only say it has to be seen to be believed.

This film is saved from being a catastrophe simply by its high technical production values (it snagged five technical Oscar nominations), such as Jerry Goldsmith’s and Alex North’s score and cinematography Leon Shamroy. But its human element- direction, prolix screenplay (by Philip Dunne), and acting, are horrid. And, perhaps the only really good thing I can say for this film is that it provides further proof that such a hack studio filmmaker like Carol Reed, could never have directed “The Third Man,” the great 1949 film, released with Reed’s name as director, but which many suspect was actually directed by the then-blacklisted and blackballed Orson Welles. That earlier, 1949 masterpiece, has Welles’ DNA written all through it, whereas this overblown, bloated, self-indulgent mess has the DNA of Reed all through it. I could mention some of the actors in the film, but none really matter, so I choose not to. Trust me, you are missing nothing, save the posthumous embarrassment of those involved.

The DVD, from 20th Century Fox, lacks an audio commentary, but this is one of the rare films where that’s not a bad thing, since the narrative and dialogue play out almost like a modern DVD audio commentary. This is less a film dramatization than a re-enactment of history from dry textbooks. The transfer print, in a 2.20:1 aspect ratio, and in Todd-AO, is virtually flawless, and the restoration is superb (and the DVD includes a demonstration of the restoration). There are trailers for other films.

” The Agony And The Ecstasy” is the sort of film one, at least years ago, might have felt an obligation to see, as a sort of crash course in “The Lives Of The Artists” (as Giorgio Vasari might have said it), but, nowadays, with the Internet and countless books on such subjects, any such obligations seem quaint. There is no real story here, and, the fact is that Irving Stone took some huge liberties with reality in novelizing Michelangelo Buonarroti’s life. The film is just an excuse to show off the then trendy Todd-AO process with a quasi-epic subject matter. It fails. Don’t you. Skip this film and surf the Web, instead. Or, better yet, if you want to watch a Heston film with bloviating that has real depth, power, and meaning, watch the original “The Planet Of The Apes” instead. There, one does not have to sit through the windy exegeses of religion, by Dr, Dolittle (who merely talks to animals); one can go one better, and get a better quality rant from Dr. Zaius (who really IS an animal). Enough jokes. Bosley Crowther was right; that’s reason enough this film is damned.