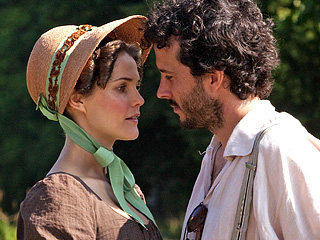 This charming movie is perfect for Jane Austen fans and a treat for those who are not devotees. It’s a frothy summer movie with romance, humor, a dab of social commentary and a happy ending. “Austenland” isn’t important in that “change your life” way and it won’t be particularly memorable, but you’ll definitely enjoy watching it.

“Austenland” is the talented Jerusha Hess’ directorial debut, yet one wouldn’t know it from her skill and professionalism. She also co-wrote “Napoleon Dynamite” (2004), “Nacho Libre” (2006), and “Gentlemen Broncos” (2009). Jerusha Hess is a name to remember,

Our heroine is single, thirty-something Jane Hayes (nicely performed by Keri Russell (“Dark Skies,” FX TV “The Americans”) whose relationships always seem to end badly; and so, she withdraws into her Jane Austen fantasies, many starring Mr. Darcy. Or is it the other way around where, in reality no modern man can live up to that “Pride and Prejudice” hero?

Jane puts caution and economics aside and takes an expensive two-week vacation at Austenland, a private English estate at which female guests play the roles of women living in Austen’s time of the Regency. They dress in period costumes and follow the etiquette of the day. Austenland, like fishing resorts that stock fish, is stocked with Regency period men. The estate is run by the ultra snobbish, but savvy executive, Mrs. Wattlesbrook, acted by multiple Emmy(r) and Golden Globe(r) winner, Jane Seymour, who plays her role brilliantly.

Another guest is the lusty, arrogant Miss Elizabeth Charming, a 50-ish Southern belle wearing bows and ruffles. Jennifer Coolidge (Stifler’s mom in “American Pie,” “For Your Consideration,” “Legally Blond”) gives a standout, hilariously broad performance as Miss Charming. Her attempt at a British accent that wavers between a ludicrous cockney and awful upper class accent is very very funny.

Since there were few activities for women of that era, Jane and her compatriots spend time sitting in the parlor with several men, the foppish Colonel Andrews (George Callis), the extremely hunky Captain George East (Ricky Whittle) and Mrs. Wattlesbrook’s nephew, the brokenhearted Henry Nobley (JJFeild,”Captain America,” Northanger Abbey).

Miss Charming of course flirts outrageously with the men. But our Jane is bored and self-conscious about being a part of this overdone scene. Enjoying her fantasy, yet needing to break free, she winds up seeking solace from Martin, the stable hand (Bret McKenzie, HBO’s “Flight of the Conchords,” “Lord of the Rings”).

There are many twists and turns in the plot, which I won’t reveal, until its romantic and humorous 21st-century conclusion. “Austenland” is frivolous summer entertainment at its best.

Confession: I am a Jane Austen fan. I’ve read all her novels and seen the TV and movie versions. I could see myself buying the new Royal Mail stamp set with scenes from Austen’s six novels pictured on the stamps. I’ve also read several Austen spin-offs novels, including the book “Austenland” by Shannon Hale (2007), on which this film is based. Here are some other excellent Austen spin-offs.

“Jane Austen in Boca: A Novel” by Paula Marantz Cohen (2003)
“The Jane Austen Book Club” by Karen Joy Fowler (2005). No info on the movie version.
“Death Comes to Pemberley” by P.D. James (2011)
Stephanie Barron’s mystery series in which Jane Austen solves the crimes

So why are Austen’s novels so popular that they have never been out of print? First, her writing is superb. Second, she creates memorable characters who come alive, warts and all. Third, Austen has an acerbic wit that helps us understand and sympathize with her protagonist. Fourth, rarely in her novels do the pretty, bubble-headed girls prevail. Rather, the quieter, plainer, intellectual girls find their Mr. Darcy.