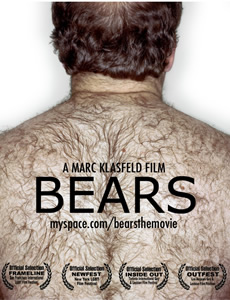 Marc Klasfeld is a smart, savvy, and insightful filmmaker, who applies much of the tricks of the trade he learned making music videos and working with celebrities such as Eminem and Beyoncé. Moving into documentary filmmaking he demonstrates professional growth in Bears. Combining a strong sense of narrative tension and an eye for commercial flash, the young director follows a half dozen contestants along the road to the 2004 International Mr. Bear Contest in San Francisco. Klasfeld captures the original bear spirit through telling moments, sometimes touching and intimate, sometimes silly, at times even surprisingly candid. This film is full of heart and soul.

Bears began as a gay male subcultural identity and community in the 1980s, springing up in various cities across the US, and most notably, of course, in San Francisco. Why San Francisco? It was the right time and the right place –– the density of the gay male population, the ever liberal and still welcoming culture of this original Gold Rush capital, the tradition of social and sexual experimentation, and the overwhelming, devastating impact of the original AIDS epidemic — all converged at this ground zero to give birth to another new experiment in gay identity and community at a time when many gay folks were wondering if gay culture could survive AIDS.

International Bear Rendezvous, or IBR, is an annual event held over Presidents Day weekend every February. The local Bears of San Francisco serve double duty, as both a social club for bears and admirers (drawing upon Bay Area, national and even international membership bases) and as a 501(c)3 nonprofit charitable organization. As such, BOSF’s primary mission is to raise funds for various community charities in San Francisco. Its most recent annual campaign raised over $350,000, mostly through IBR, making it one of, if not the biggest gay fundraiser in the LGBT community.

The climax of each IBR is the International Mr. Bear competition, and as Bears documents, service and fun combine to make for a strenuous run for the sash. As long-time emcee, the late Lurch (who appears in Bears) was always wont to say, “Everyone who runs is already a winner.” The competition culminates with the bestowal of four separate titles. The 2004 contestant base offers a typical mix of bearish types in friendly competition. Some, such as Mr. So Cal Bear, build upon a natural sense of showmanship and competitive spirit, while others demonstrate their own flavor of natural bear spirit. Mr. Kentucky Bear is a former Marine and horse-breeder, a “man’s man,” who would have been a natural for the leather community of a previous generation, and Mr. New York Bear, a bagpipe-playing, big-boned, and even bigger-hearted blond, who epitomizes (unself-consciously) much of the open-hearted, compassionate, fun-loving, even civic-minded “inclusivity,” which was the original hallmark and rallying cry of the bears back in the 1980s.

For the sake of full disclosure, this reviewer saw Bears twice, first in a film reviewers’ screening and again when it played on a Sunday afternoon of the 2007 San Francisco International LGBT Film Festival, in the legendary Castro Theater. (A Spanish Colonial Baroque movie palace dating back to 1922, the Castro Theater has become a kind of jewel in the crown of the city, its LGBT community, and the Castro District.) Needless to say, the house was packed and played to an enthusiastic home crowd. San Francisco film audiences are emotionally effusive, vocalizing their likes and dislikes at pretty much any movie house in town. To see how far the tribe of bears has come in only twenty-five years was a very moving experience for all of us who have been around that long.

Klasfeld addressed the audience before and after the screening. He was accompanied by Rich Tramontozzi, President of the BOSF, Castrobears’ Harry Litt and organizer of Lazy Bear Weekend (the other major northern California bear event which takes place during the summer in Guerneville on the Russian River), and local bear person of note Dave Hayes, organizer of the weekly San Francisco Movie Bears, two-stepping guru at the Sundance Saloon, and one of the six contestants featured in Bears.

[An aside: for anyone wondering, Dave received not just the one paddling (which appears on-screen), but also a second, more serious blow, which knocked him to his hands and knees. One of the few deficiencies of this film, I would argue, is the unfortunate loss of the footage of this second paddling; as edited, the film imparts an erroneous impression, as if Dave were overreacting to what the film audience sees.]

Kudos are due Klasfeld, an outsider to the bear community, for such a humanizing and even-handed treatment of what no doubt was a rollercoaster ride of personalities and politics. Klasfeld leaves in each individual’s warts and blemishes, as they bared themselves before his camera. Above all, the director’s eye for capturing the heart and spirit of the bears makes this film not just another documentary about another colorful gay subculture. Eschewing historical framing, he captures the lived moment and creates a transcendent message to movie-goers everywhere about the bonds that bring us together, both through our differences and similarities, about the richness of our cultural diversity, and about our common humanity as bears.