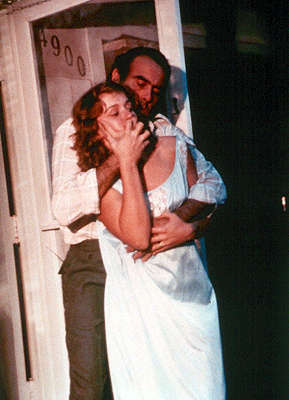 The reissue of Joel Coen&#146;s and Ethan Coen&#146;s 1984 Blood Simple contains a brief tongue-in-cheek prologue in which a tweedy Clifton Fadiman clone puts aside a leather-bound tome long enough to extol the merits of "this exquisite masterpiece." (It&#146;s the filmed equivalent of the put-on prefaces that accompany published versions of the Coens&#146; screenplays.) But what "Mortimer Young" doesn&#146;t mention is how offbeat the movie seemed at the time of its debut, or how it thwarted moviegoers who&#146;d become addicted to rooting for their protagonists. Blood Simple represented a different breed of filmmaking: ironic, seemingly indifferent to the welfare of its characters, and extravagantly aware of itself as a movie. Even some of its biggest fans had a hard time articulating what they liked about the film because its intentions couldn&#146;t be confirmed until the Coens had made another picture or two.

Today it&#146;s easy to enjoy Blood Simple as something much simpler: film noir, Texas Style. Ceiling fans have replaced the Venetian blinds and the villain has exchanged his fedora for a straw cattleman&#146;s hat. The plot revolves around an adulterous affair between Ray (John Getz), a no-account bartender, and Abby (Frances McDormand), his boss&#146; wife. When Abby&#146;s husband, Marty (Dan Hedaya), learns of the affair, his cancerous anger eats through every part of his personality until he finally resorts to hiring a primitively venal private detective, Loren Visser (M. Emmet Walsh), to murder the couple. Visser is a rattlesnake disguised as a vulgar bumpkin, and the reptile in him comes fully alive at the prospect of earning ten thousand dollars. But why should he commit two murders when one will suffice? (Walsh, in the performance of his career, so expertly oozes the reek of moral decay that twice in the movie flies show up to walk across his face.) The detective doublecrosses Marty &#150; he puts a bullet into him and then drawls at his body, "You look stoo-pid now" &#150; but he mistakenly leaves evidence behind that would connect him to the crime. His attempts to remedy the situation, coupled with Ray&#146;s misinterpretation when he stumbles upon the crime scene (he assumes that Abby killed her husband), lead to a roundelay of farcical misunderstandings that bear murderous implications for everyone involved.

The Coens&#146; trademark aloofness works to perfection in Blood Simple because only the audience has a bird&#146;s eye view of the action. We&#146;re privy to information that&#146;s withheld from Abby and Ray &#150; specifically, that Visser&#146;s need to tie up his loose ends has put them in harm&#146;s way &#150; and we&#146;re forced to watch as they draw disastrously wrong conclusions at every step of the proceedings. (Their haplessness is epitomized by Ray&#146;s panicked attempt to mop up a pool of blood with his plastic windbreaker.) Because they don&#146;t even know that Visser exists, Abby and Ray can only suspect each other when things go awry, and as they grow ever more alienated from each other, the movie plays off our familiarity with noir conventions, and perhaps off our memories of our own soured romances.

Blood Simple is at its best when it teases our state of mind with a variety of twilight effects. It&#146;s nearly silent for extended stretches (the scene in which Ray disposes of a body in a farm field lasts a full ten minutes without a word of spoken dialogue), while Carter Burwell&#146;s spare piano score lends a lunar quality to the movie&#146;s fluid transitions. Through it all Barry Sonnenfeld&#146;s photography guides you through the spectral debris that&#146;s sprinkled throughout the movie: a string of dead fish flopped across a tabletop, some plumbing fixtures glistening under beads of icy condensation, a VW beetle that has a malevolently watchful presence. Even the crease in a dead man&#146;s trousers seems invested with the power of speech.

The Coens have streamlined Blood Simple for this re-release, deleting a couple snippets of dialogue whose absence is noticeable only because the cuts marking their removal are surprisingly abrupt. But virtually everything memorable in the film remains intact, including some things &#150; such as the pointlessly flamboyant shot that glides along the bar and over a sleeping barfly&#146;s head, or the close-up of Marty barfing towards the camera lens &#150; that it could have profited by losing. A couple of new musical cues have been added and a Temptations song has been restored to the end credits. Most importantly, the movie has been given a new digital stereo mix so that its carefully worked out sound effects &#150; the crackling of a bug-lamp at the climax of an important speech, the tip of a shovel rasping over an asphalt highway &#150; can work their full unsettling magic.

Blood Simple plays almost exactly as it did in 1984, for better and for worse. There&#146;s not much going on beneath its surface, and it doesn&#146;t bear comparison to great thrillers like The Third Man or Rear Window. Yet its festering, eerie atmosphere is almost comically engrossing while you&#146;re watching it, and it runs absolute circles around assembly-line jobs like Fatal Attraction and The Fugitive. Its hair-raising set pieces &#150; the burial scene, the grisly cat-and-mouse pursuit at the end of the picture &#150; have the delicious storyboard clarity of Hitchcock&#146;s great sequences, and time hasn&#146;t diminished the queasy shocks one gets from the movie&#146;s jolts of violence. It&#146;s fitting that Blood Simple closes with the sound of a sardonic cackle, for the picture served notice that American cinema was about to get a boost from two formidable yet highly prankish talents. The Coen brothers had arrived.