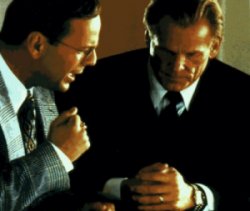 What could be funnier than Nick Nolte in a dress? If you answered "Nothing," then run, don’t walk, to the nearest theater showing Alan Rudolph’s new film adaptation of Kurt Vonnegut, Jr.’s 1973 novel Breakfast of Champions. But be sure you’re in damn good shape, because that nearest theater may be hundreds of miles away. Hollywood Pictures is releasing this movie like it’s in the Witness Protection Program.

The vote of no confidence may not be entirely deserved, but it’s easy to imagine the studio’s marketing team throwing their hands up in despair after viewing this downbeat, elliptical curiosity. Bruce Willis, in his most hilarious hairpiece to date, stars as Dwayne Hoover, owner of the Exit 11 Motor Village in Midland City, U.S.A. Dwayne is the latest victim of the free-floating existential suburban dread that has been running rampant through American movies for the past few months. He greets each new day with a pistol in his mouth, before plastering on the taut grin of desperation that is his armor against the world. The town that surrounds him is the sort of kitschy, primary-colored nightmare populated by pop-eyed, wide-angled cartoon grotesques familiar from Tim Burton and John Waters movies of the 1980’s. Dwayne’s similarly suicidal wife Celia (Barbara Hershey) has medicated herself out of daily existence with the wonder drug Relax (slogan: "Goodbye, Blue Monday!") and his son has re-christened himself "Bunny" and taken up a lounge lizard gig at the local hotel bar.

Everyone in Midland City is on permanent mental vacation, and all their flights of fancy center around an enchanted island paradise. It’s Hawaiian Week at Exit 11 Motor Village, and the spirit of golden sunsets and fruity tropical drinks, as embodied by the musical exotica of Martin Denny ("Quiet Village"), hovers over the sterile, deadened town like a storm cloud ready to burst. And burst it does, with frantic, semi-coherent results.

Most of the actors try hard – way, way too hard. It’s as if Rudolph has directed them to wring laughs out of the script through sheer physical exertion. Nolte (as Dwayne’s sales manager Harry Le Sabre) and Albert Finney (as eccentric science fiction writer Kilgore Trout) both sputter and grunt and sweat their way through their scenes, but comedy rarely results from their efforts. Willis fares better, but the nature of Dwayne’s identity crisis is so vaguely delineated that he doesn’t have much to work with. Mostly he ends up reacting in horror to the sight of his own face, the sight of other people’s faces…and just about everything else.

Vonnegut’s books should come with advisory stickers: "WARNING: Any attempts at adapting the contents of this novel to the silver screen may be hazardous to your career." Nolte, at least, should have learned his lesson after the ill-advised Mother Night disappeared without a trace. And does anyone remember Jerry Lewis’s triumphant dual role in 1984’s Slapstick of Another Kind? Please, hold your applause until the end. It’s not necessarily that his style is impossible to translate (imagine, say, Steven Soderbergh wrapping his fractured time syntax around Vonnegut’s masterpiece Slaughterhouse-Five), so much as the fact that most of the attempts to date have been so literal-minded. Breakfast of Champions, in particular, is so riddled with the author’s fragmentary first person interjections, it’s like a rock skipping across his stream of consciousness. Vonnegut himself plays a major role in the book’s climax, but he’s nowhere to be found in the movie (except in a cameo as a TV commercial director).

Rudolph throws a ton of visual trickery at the screen in hopes of livening up the proceedings. Dwayne’s thoughts ripple through a cartoon brain superimposed on his head; mirrors warp into dimensional gateways; Buck Henry appears on the thousand dollar bill. But the only image with lasting impact is the signature shot of Dwayne’s forced, pained smile transformed into a literal mask as the employees of Exit 11 Motor Village greet him with cardboard replicas of his face pasted over their own. It’s almost a dead ringer for a scene in Being John Malkovich – which, come to think of it, is the movie you should be seeing instead.

(41063)
$9.98 (as of January 25, 2021 - More infoProduct prices and availability are accurate as of the date/time indicated and are subject to change. Any price and availability information displayed on [relevant Amazon Site(s), as applicable] at the time of purchase will apply to the purchase of this product.)