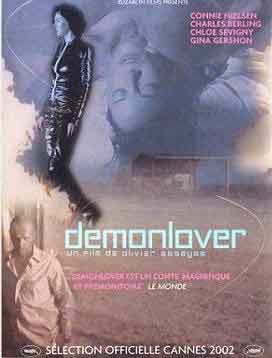 Olivier Assayas’ demonlover is this decade’s Diva. Sumptuous but empty, it’s a film so chic you should see it right now, because it will start looking dated sometime next week.

demonlover is a cloak and dagger espionage movie with the double and triple crossing operatives killing each other not over state secrets but instead for the internet rights to cutting edge 3-D anime and interactive pornography. The film has a nasty, amoral kick. Drained of any pretense of working for the greater good, every character is a thuggish mercenary acting out of purest self-interest. There’s no one to like among these traffickers in horrifically violent pornography. The putative heroine opens the film by poisoning a business rival, an act that eventually seems benign after the car bombings, beatings and torture-for-profit-and-titillation that follow in its wake. It’s a vision of the world so snarlingly nihilistic it could leave Neil LaBute crying for Mommy.

Nielsen plays Diane, a junior executive in a multinational media company that’s closing in on a deal on a line of violent, pornographic animation. She drugs the woman in charge of the campaign, Karen, leaving her bedridden just long enough for Diane to win the assignment. Karen’s girl Friday, Elise (Chloe Sevigny), is assigned to work under Diane, who abuses her mercilessly. Soon a note appears on Diane’s desk, making it clear that someone knows who took Karen out of the picture.

After a trip to Japan to advance the deal, Diane returns to Paris to find her apartment ransacked. Meanwhile, American representatives from demonlover.com, an internet distributor of manga and anime, arrive, offering funding for the deal in exchange for a promise to eliminate their main rival from the field. The only snag is demonlover’s reported connection to the Hellfire Club, an interactive torture site (surfers pay extravagantly to watch bound and gagged women get beaten by hooded torturers on their instruction) that’s as profitable as it is difficult to access. Once the site is mentioned, the film shifts from business to skullduggery and the bodies begin to pile up.

There’s not much that’s surprising in the story, which amounts to a free for all of back stabbing and retribution with a pinch of S & M kink and a soupcon of existential dread. What makes the film hypnotic is the coolly detached tone, achieved though its brutal pace (it takes a breathless half hour just to sort out the characters’ names), dissonant score by Sonic Youth and whiplash editing. Assayas (Irma Vep) isn’t afraid to make demands on the audience, never slacking the pace to explain the crisscrossing plots or shadowy motivations. He simply lets the events play out and leaves the audience to work out the implications later.

demonlover is not the film that debuted at Cannes in 2002. Since then, the film has been cut by twelve minutes, censored and remixed. The cuts are purported to be torture footage more extreme than that which remains. Some animation from the Japan sequence has been blotted out &#150; the violence remains, but the animated genitalia can no longer be seen. The real pity is the remix, which aims at making the film less cacophonous. In a film that’s all surface, cacophony is a virtue. It could use a more lethal dose of noise.