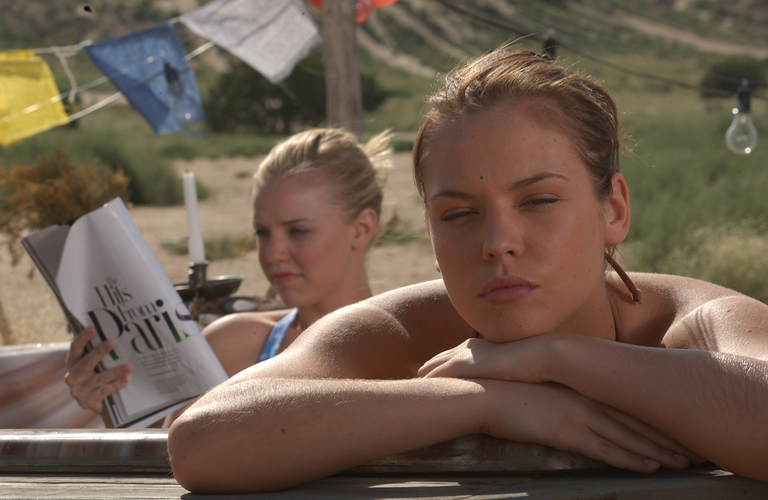 Most teenagers would be eager to begin their lives as adults if they had the looks, the intelligence and poetic ambitions that 18-year-old Audrey (Agnes Bruckner) possesses. But Audrey chooses to respond to the reality of encroaching adulthood by ignoring it. Due to an anxiety whose source is only vaguely hinted at, Audrey adamantly refuses to even think of leaving the trailer park home she shares with her dad (John Corbett), even though high school is over and she has a stack of college acceptance letters under her bed. Instead, she insists on staying in Dreamland, the eponymous trailer park community that lies in the middle of a vast, empty desert in New Mexico.

Just as Audrey refuses to face her future, her dad refuses to leave the trailer. Still in mourning over the death of Audrey’s mother two years ago, he spends his time lying in bed, chain smoking and drinking Pabst Blue Ribbons. Audrey cares for her dad, mainly keeping him in cigarettes and beer, but she spends most of her time with another Dreamland exile from life, her best friend Calista (Kelli Garner), who has been diagnosed with multiple sclerosis. Audrey has not only promised never to leave Calista, but she selflessly plays matchmaker when a hot young heartthrob named Mookie (Justin Long) moves into the trailer park with his family. No matter that Audrey has fallen in love with Mookie herself, or that he also seems taken by her; in yet another defensive move to avoid participating in life, Audrey encourages the befuddled boy to turn his attentions to the romance-hungry Calista, who turns out to be easily wooed.

If this story sounds familiar, it may be due to its resemblance to one of those fairy-tale storylines that turn up in the teen movie. And just as Audrey seems to be an adolescent refusing to become an adult, the filmmakers are refusing to let go of their desire to make this coming-of-age film an adult drama, instead of letting it become the teen movie it is meant to be. The movie feels like it’s stuck in some limbo state, some dreamland of its own, and both the director Jason Matzner and screenwriter Tom Willett are in their separate ways to blame.

Matzner has taken Willett’s screenplay and managed to turn it into something more than the sum of its parts, a teen/adult hybrid genre that is often both enchanting and puzzling. He does this partly through great casting, getting finely tuned performances out of all of the actors, especially Bruckner as Audrey. One can easily get lost thinking of how different this movie would have been if Hillary Duff had been cast as Audrey. Bruckner supplies Audrey with an earthy yet soulful solidity that brings substance to a character who might otherwise seem weak and indecisive.

Matzner also makes imaginative use of the landscape to give the movie a lyrical lift that teen movies often lack. It is one of filmmaking’s illusory qualities that the desert light is the type of light that produces magic; it makes everything appear to be more beautiful, more potent with meaning, than it actually is. The desert landscape in “Dreamland” is so beautifully shot with such bold skill that it is able to overshadow the bareness of the story. The result is a setting that adds a texture to the movie, making it appear more complex, more adult-like, than it actually is.

Matzner is aided in his attempts to add complexity to the movie, to “adultify” it, by Willett, whose writing somehow comes across as funny, poignant, adolescent and penetrating all at the same time. Willett would be advised to decide on perhaps one or two of these intentions when writing a scene, rather than trying to pack them all in. Perhaps he can’t decide because he’s trying to do it all—coming up with a movie that will bring in the under 20 crowd now so crucial to a movie’s survival, and yet writing with an eye to adult issues, even adult humor, that might better satisfy his creative urges. The result is some of the strangest dialogue imaginable, especially between the two teenage girls. When the two girls are soaking in the trailer park’s hot tub underneath the desert sky, Calista tells Audrey of her ambition to win a beauty pageant, then goes on to explain why she’d rather be Miss Venezuela than Miss America, listing the reasons why Venezuelan culture would be a better place for a beauty queen in her subsequent career choices. This is supposed to be funny, but somehow it doesn’t quite come off. One can’t help but wonder if this is Calista talking, or is she channeling a screenwriter, thirtyish, probably male, who can’t decide whether to make Calista a typical bimbo or wise beyond her years.

It doesn’t help that Garner, who plays Calista so admirably, has the body of a Playboy pinup—something for boys of all ages. Is this well-endowed knockout supposed to be the movie’s comic relief, and if so, why does she also end up being the movie’s most tortured soul? Somewhere in the middle of “Dreamland,” Audrey gets left holding her notebook of poems and Calista becomes the driving force that drives the movie towards its resolution. This includes somehow getting Audrey’s dad to deal with his depression and Audrey her inertia. With all the conflicts so emphatically resolved, the fairy-tale ending places “Dreamland” squarely back into teen movieland.

As the mother of a preteen daughter who has dragged me to a number of teen movies, I was captivated by this strange mutant of a movie. There is skill here, and some poignant scenes that stayed with me, including a first kiss scene that’s one of the better ones I’ve seen in a long time. It’s an almost first kiss really, but as Audrey’s dad says earlier in a bit of foreshadowing, they’re the best kind.

In the spirit of the best teen romances, “Dreamland” shows us the intensely overwhelming feelings that first love is awash in. In that first kiss scene, Audrey and Mookie finally let each other know how they feel about each other after keeping the lid on these feelings for so long. These two teenagers confess their attraction to each other in the awkward yet poignantly heartfelt way that only comes with youth. When Mookie grabs Audrey’s notebook full of her poetry and tells her he wants to read everything she’s written, his desire to be close to her is so palpable that my heart stopped right along with hers.