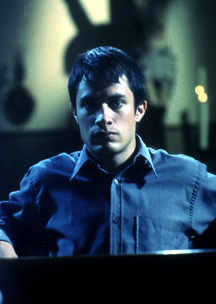 El Crimen del Padre Amaro has been a huge success in Mexico, the highest grossing Mexican film ever. And it’s no wonder, for the film deals frankly with very real issues of day-to-day life in today’s Mexico, couched in a cogent story with well developed characterizations. What is genuinely startling is that the film is based on a novel written in 1875. That it seems so timely today is a demonstration of how little things change when it comes to matters of the heart and the soul, not to speak of matters of power and corruption .

Father Amaro (Gael Garcia Bernal) is assigned to his first post since his ordination, a parish in a provincial Mexican town where Father Benito (Sancho Gracia) has long been the spiritual leader. As the young padre rides a bus towards his new home, hijackers stop the bus and rob the passengers of their valuables at gunpoint. It’s a foreboding of the moral rot to be uncovered.

When he is shown the modern hospital under construction in town, the pride of Father Benito, Amaro wonders where the money is coming from. He finds out soon enough that it is drug cartel money, laundered through the mayor of the town and carried in cash by the mayor’s wife to confession, where she turns it over to the priest. Father Benito is not only in cahoots with the drug lords, but he also has a long term mistress, Sanjuanera (Angelica Aragon).

Benito is also critical of another priest, Father Natalio (Damian Alcazar, Under California: The Limit of Time), who preaches liberation theology and lives and works with the guerilla revolution of the peasants. When the activities of both Benito and Natalio are revealed in the newspapers, Amaro sees his beloved mentor, the Bishop, use his power to blackmail the newspaper into a retraction and to excommunicate Natalio. Power corrupted in 1875, power corrupts today.

But the most profound challenge to Father Amaro’s idealism is Sanjuanera’s daughter, Amelia (Ana Claudia Talancon), a deeply religious and stunningly beautiful nymphet of 16. Despite an attempt to quell his desire by putting his hand over fire, celibacy gives way to the passion of young love.

Without ever becoming didactic, director Carlos Carrera expertly weaves this novelistic story of entangled relationships and complex morality. The story is told largely from Amaro’s viewpoint, carrying the audience on his journey from naivete to questioner to participant, testing his calling (but not his faith). Each of the other key characters is tellingly written in Vicente Lenero’s screenplay and fleshed out by skilled performances. In a smaller role, an eccentric old crone, Dionisia (Luisa Huertas) fills in the intricate mixture of Catholicism and indigenous culture and belief always present in Mexico.

Bernal (Y Tu Mama Tambien, Fidel, Amore Perros), on his way to becoming as big a star in the U.S. as he is in Mexico, nicely underplays a role that easily could have veered into melodrama. With his smooth-skinned face and vulnerable overbite, he’s a natural for the idealistic innocent. As he slips into the quicksands of corruption and temptation, he becomes the personification of moral rot in the Church, but he never loses the individuality of the character.

The problems of (and with) the church in Mexico are, on the surface, different from the scandals plaguing the church in the U.S. where, in response to the cries of protest, the church pleads that a few rotten apples are spoiling the good work of so many fine priests. This may well be true, but the more serious criticism–the more profound weakness–of the church is not of the misdeeds of the few, but of the deeply entrenched, out-of-touch, ultra-conservative hierarchy that is more concerned with protecting its own flanks than in listening to the needs of its own parishioners. If the church is weakened, the weakness originates within, not from any external attack. El Crimen del Padre Amaro makes a convincing case from its uniquely Mexican point of view.