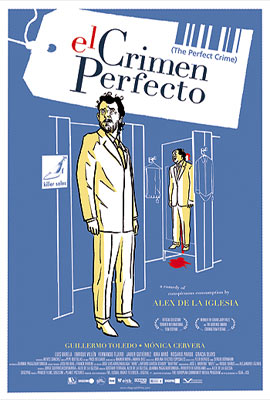 The Perfect Crime is a box of Hollywood-Spanish fusion comedic-suspense cinematic bon bons. Billed as a &#147;comedy of conspicuous consumption,&#148; the film stars Guillermo Toledo as Rafael (&#147;Rafa&#148;) Gonzelez, the Ladies&#146; Department&#146;s star sales clerk and suave ladies man who, as the film opens, is in competition with the dowdy, toupeed favorite from the Men&#146;s Department (and Rafa&#146;s hated rival), the closeted Don Antonio (Luis Varela). They are in all-out competition for the coveted position of Floor Manager.

Rafa quickly proves to be a hysterically poor loser and soon has his hands full, with an unexpected body and more unexpected, messy entanglements with the only female in view that he had not conquered, the singularly unattractive Lourdes. Lourdes comes fully accessoried, with an even more hideous, dysfunctional family. And then things start to turn bad.

Alex De La Iglesia is considered a member of the unofficial new generation of Spanish directors. Despite his burgeoning reputation as a cult movie maker (with a growing list of popular films, including The Day of the Beast and 800 Bullets), De La Igeslia has remained obscure in the U.S. He has been compared to Guillermo Del Toro and Peter Jackson, and his weird-ironic mix of cinematic styles, and over-the-top comedy in The Perfect Crime suggest a mutant love-child born of Pedro Almodovar (Women on the Verge of a Nervous Breakdown) and Billy Wilder (Some Like It Hot). The harsh fluorescent colors, the claustrophobic, brittle-bright retail commercial interiors (much of the film is shot in &#147;Yeyo&#146;s,&#148; a fictitious upscale Madrid department store), the stiffly pointed double entendres all point toward a parody, or homage, to Hollywood sex comedies of the 1960s. In one early scene the camera even lingers on a pop art poster of Audrey Hepburn.

Rafa&#146;s pronouncements are self-ironic to the point that the film teeters on the edge on becoming sociopolitical commentary. His credo is to indulge his every desire in pursuit of his vision, a dolce vita of elegance and excess. His own apartment is un-chic-ly shabby. Only mediocrity (which he defines to include marriage, children, a mortgage, and low-end mass-consumer fashion) is inexcusable. No sooner has the twisted plot drifted from a sophisticated comedy of sexual mores to satirizing the absurdity and stupidity of crass consumerism, than it takes a sharp Hitchcockian turn. Gradually it becomes apparent that the real mystery, and what drives the absurdist humor, is a simple narrative strategy. What exactly is this crime that is so perfect?

Rafa accidentally kills his rival, only to discover this has been witnessed by the owner of a pair of white tennis shoes. He seeks to identify, and hush up, the faceless witness (who has heard but not seen the crime), and becomes increasingly paranoid as the identity of the witness becomes more mysterious. The films veers off in several cinematic directions, to heightened comedic effect. Tables turn. The pursuer becomes the pursued. Demons pursue and console and bond. The audience experiences near-vertigo with the alluring fatal attraction of the perfect crime, and the film soars to ever greater, sillier, more absurd heights. Just what was the perfect crime? Who perpetrated it? When? How? And can they really get away with that? The nuggets ofthis box of chocklits are intended to be enjoyed one fistful at a time.