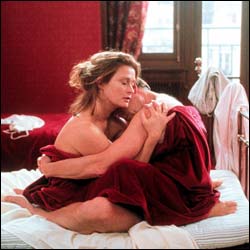 In Faithless, Ingmar Bergman’s script remains in the territory he staked out years ago and claimed as his own–a special corner of the Swedish psyche that is morbidly introspective and hopelessly alienated. In the 1960’s and 1970’s, Bergman created a unique body of work like none that came before, films that were almost claustrophobically focused on interior landscapes, more often than not riddled with guilt and overflowing with emotional anguish. Films like Persona, Cries and Whispers, and Scenes from a Marriage were written, acted, and directed with such artistry that fans were more than willing to follow Bergman into his dark, painful probing; the reward was in the insight and new levels of understanding attained.

Faithlesstells the story ofa beautiful actress, Marianne(Lena Endre), who is married to a symphony conductor, Markus (Thomas Hanzon), and leaves him for his best friend, David (Krister Henriksson), a stage director and filmmaker. While there have often been strands of unquestionably autobiographical content in Bergman’s work, he appears here to be forcing the issue. Faithless is skillfully and sensitively directed by Liv Ullman, with whom Bergman fathered an out-of-wedlock daughter, though he was between marriages at the time. It is not a literal autobiography that this team offers here, so much as an autobiography of the soul. Bergman was the son of a Lutheran minister and had a strict upbringing; one assumes from his worldly life as an adult that his legacy from that background was the guilt, without the solace of faith–one aspect of faithlessness.

The story of these three glamorous characters is told as the recollections of a character named Bergman, an old man who finds time mercilessly condensed as he nears his end. In his memory trip he conjures up Marianne who actually narrates the story, seen in flashbacks. It’s a complicated structure, since the Marianne who is talking–indeed, the entire scenario–comes from within the mind of Bergman the character/Bergman the screenwriter. And it is undeniably an engrossing tale, portraying the lives and feelings of these characters with convincing dramatic skill.

All of the performances are notable in Faithless, but Lena Endre is extraordinary. With a natural, unforced pliancy, in both her roles of storyteller and participant, she shows a growing understanding of the consequences of faithlessness; as her understanding grows, her pain grows in direct proportion.

The story progresses over time and the acts of faithlessness amongst the adults continue with ever greater degrees of selfishness and cruelty, and, in particular, with utter disregard for the effects of their actions on Marianne and Markus’ young daughter, Isabelle. She is the only innocent amongst three adults who are so self-involved as to turn her–nearly literally–into a sacrifice. In a stunning scene that alludes to Persona, Marianne looks at herself in a mirror, the two angles of her face otherwise surrounded by darkness. "What am I doing to Isabelle?" She knows exactly what she is doing to Isabelle and she does it anyway, as faithless to her daughter as she has been to her husband. The men are equally culpable.

Bergman the narrator walks off onto his isolated, windswept beach speaking of alienation and loneliness.

By the end of two and a half hours of living through the history of this triangle, for all the skill and artistry displayed, it would be understandable if all some want to say to him is, "Oh, get a grip!" Along the way, during its unrelenting exposition of privileged adults behaving with self-indulgent dereliction of responsibility, sympathy for the characters becomes impossible to sustain. Yet the Bergman character is awash in self-pity (as was his alter-ego, David) and self-pity, especially for the older Bergman who now understands the implications of what happened long ago, is a response that fails to command either sympathy or respect.

No catharsis is offered here; none has been earned. Perhaps that is the precisely the oppressively bleak message Bergman wants to share.