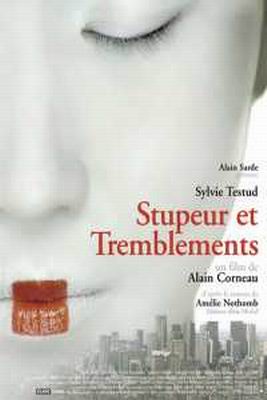 A mindboggling view into the heart of Japan, Fear and Trembling includes some of the incongruous hilarity of Sofia Coppola’s Lost in Translation and the monstrous (if ceremonially correct) barbarity of Nagisa Oshima’s Merry Christmas, Mr. Lawrence, but it’s also new and different. It will make you laugh, cringe, learn, and refuse to accept what appears obvious to those on the screen.

As with those two other Western perspectives on Japan, director Alain Corneau’s story is about the comedy and trauma of East-West relations, in this case seen through the epic (and yet deeply personal) struggle of a young Belgian woman to "fit in" with a Tokyo corporation. The film is based on an autobiographical novel by Amelie Nothomb, played in the film by Sylvie Testud.

Amelie was born in Tokyo, daughter of the Belgian ambassador to Japan (although the film doesn’t say this), and lived there until age five when her family returned to Belgium. She considered Japan her real home, maintaining a deeply-felt, romantic attachment to the language and culture of the country.

In her mid-20s, Amelie gets a job as a translator with a giant corporation in Tokyo.The film tells the story of her often incredible life of abuse, humiliation, and (to an outsider) near-insane routines that is the lot of employees in Japan, especially those who are women. Amelie starts doing brilliant multilingual research– in violation, as it turns out, of company procedures, defying a supervisor’s hatred of "odious Western pragmatism." She is relegated to resetting calendars, to serving coffee, to being made to copy the same document over and over again, to months of cleaning restrooms.

Impossible? Well, yes, but it is both "a true story" in fact, and Corneau (Tous les matins du monde, New World) somehow gets the audience a few tentative steps closer to the "Japanese mind." It is, of course, only a partial success, but in the end, there is a fragile, right-brain appreciation of what is "most Japanese" in the film: Amelie’s persistence through it all, to "save face."

At the same time, much of the conflict remains incomprehensible to an outsider, such as a supervisor’s order to Amelie (hired because of language ability) "to forget Japanese" when there are visitors to the office. His explanation: "How could our business partners have any feeling of trust in the presence of white girl who understood their language? From now on you will no longer speak Japanese."

In the large, uniformly excellent Japanese cast, Kaori Tsuji is an amazing physical presence: a 6-foot-tall Japanese woman with a face that’s both icily "perfect" and achingly vulnerable. In her film debut, Tsuji successfully copes with a major role that requires projecting many deep, often conflicting emotions without changing her uniform, constant "correct expression."