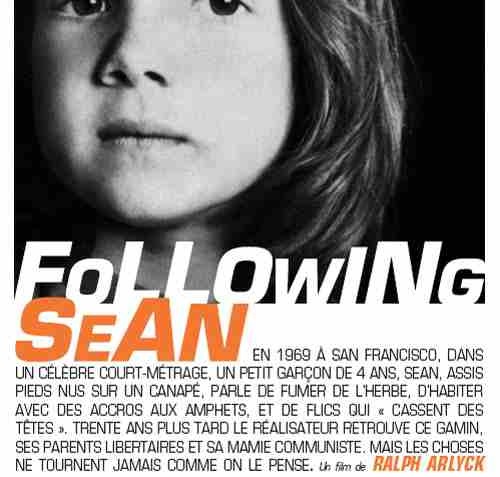 In Following Sean award-winning documentary film maker Ralph Arlyck starts from a simple proposition: whatever happened to Sean, the four-year-old son of Haight Street hippies? While in film school in San Francisco in the late 1960s, Arlyck had made a fifteen-minute film featuring his four-year-old neighbor Sean Farrell, the son of his upstairs neighbors, Johnny and Susie. The film soon became a cause celebre, heralding or damning (depending upon the viewer&#146;s point of view) America&#146;s love and peace generation, while Arlyck himself moved back to New York. Some thirty years later, Arlyck decided to head back to San Francisco to find out what happened to Sean.

What happens next compels the director and his audience on an epic voyage across three generations of Sean&#146;s and Arlyck&#146;s own families, and the political utopian impulses of twentieth-century America. Arlyck weaves a rich, complex, and surprisingly vivid tapestry of American life out of a treasure trove of home movies, film school footage, stock film, and countless interviews from both sides of the country and across several decades. The resultant documentary moves at a brisk clip, yet with the subtle movements of a Chekhov short story. Arlyck&#146;s pursuit of self-discovery &#150; and the evolving interior lives of his various subjects &#150; reveals how small changes, unexpected choices, the unseen dance between personal choices and personal fate become history, writ large. Starting from the knee-jerk question as asked today &#150; so, did Sean become a drug addict or a stockbroker? &#150; Arlyck explodes this and many other comfortable myths Americans tell themselves about who they are and where they have come from.

In the mid 1960s Ralph Arlyck left his suburban New York family to live among the hippies in San Francisco&#146;s Haight-Ashbury district. He himself did not exactly drop out, and the question of how one constructs a meaningful life is the thread that weaves this documentary together. Arlyck&#146;s own grandparents had been armchair communists in the 1930s, and over time his own consciousness shifts to a larger socio-political perspective.

He comes to understand how strongly his own experiences of the Haight love generation, and his later life, have been colored by the East Coast liberal Jewish tradition he had been raised in, through the contrasting perspectives and traditions he has encountered on the West Coast. He became entranced by, though never exactly a convert to, what he frames as the drug-fueled, anti-war, sexual revolutionary new left experiment he saw in the Haight. The parents of his neighbor Johnny (Sean&#146;s father) had been high-profile Communists and union leaders during the violent era of San Francisco &#145;s dockside labor disputes in the 1930s.

Following Sean moves both backward and forward in time, jumping between Sean&#146;s family and Arlyck&#146;s. Suggestive of the British Up series, Following Sean documents the many unexpected directions real lives take. During the final filming period, from 1994 to 2004, the underlying subtexts of idealism, utopianism, the power of fate, the interconnectivity of all life emerge, finally, taking Arlyck&#146;s original rather small quest into much deeper philosophical territory. Following Sean is both a masterpiece of documentary work and a moving piece of cinematographic poetry.