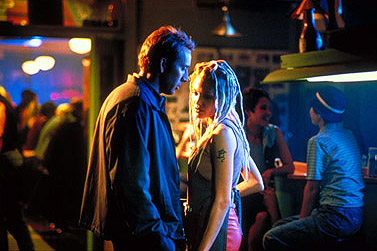 In 1974, H.B. "Toby" Halicki released Gone in 60 Seconds, a thoroughly addled movie about a ring of car-thieves chasing a big score in Southern California. Its cast was unspoiled by talent or charisma, most of its dialogue was recited with the actors&#146; backs turned toward the camera, and its guiding sensibility was so primitive that top-billing in the opening credits was given to "Eleanor," the Ford Mustang that played a prominent role in the picture. But Halicki &#150; who died in 1989 while making a sequel to 60 Seconds &#150; had a sense of what he was doing. He finished off his picture with a car-chase through L.A.&#146;s greater metropolitan area in which scores of vehicles were smashed to flinders, and that lasted more than 40 minutes &#150; nearly half of the movie&#146;s running time.

Now producer Jerry Bruckheimer (Top Gun, The Rock) and director Dominic Sena (Kalifornia) have come up with a stylish remake of 60 Seconds, using a premise so thin you can barely hang your hat on it: a master car-thief is pulled out of retirement and told that he must steal 50 high-end cars in three days if he wants to save his kid brother from the clutches of an angry crime lord. The movie&#146;s fun begins when Randall "Memphis" Raines (Nicolas Cage), desperate to save Kip&#146;s (Giovanni Ribisi) life, enlists the aid of his former associates, including his former mentor in crime (Robert Duvall), an old flame who still nurses a grudge against him (Angelina Jolie), a wisecracking "ghetto Smurf" (newcomer TJ Cross), and a thief turned driving school instructor (Chi McBride). The gang decides to snatch the vehicles in a single night, giving them two days to locate all the cars and map out the caper. But Memphis&#146; task is complicated by factors he can&#146;t see coming. A seasoned detective (Delroy Lindo) has intuited that he&#146;s up to something and wants to put him behind bars. A rival car-theft ring misinterprets his presence and pulls him into an unwanted turf war. A former ally (a scruffy, relaxed Will Patton) is now the bad guy&#146;s right-hand man, and may be playing both sides against the middle. And Kip has pulled in his crew of Gen X thieves, but their usefulness as computer-smart boosters may be outweighed by their brashness.

There&#146;s no depth to these characters, of course, but their agendas are so clear (even Kip&#146;s merry band of junior thieves are differentiated from each other) and the roles are so deftly cast that it&#146;s easy to spend time around them. Lindo brings such unblinking conviction to his I&#146;m-taking-you-down speeches that you wonder if he&#146;s lost his mind and really thinks he&#146;s a policeman. As his partner, Timothy Olyphant (he played the vengeful drug dealer in Go) gives a relaxed kick to his dialogue, including the droll one-liner he lays on a man who&#146;s just gotten leveled by a wrecking ball. Duvall appears hale and happy as the aging mastermind; it&#146;s too bad he doesn&#146;t have more to do.

The movie&#146;s women and its villain have a rougher go of it. Flavor-of-the-Nanosecond Jolie has no weight or presence, but Dame Judi Dench probably couldn&#146;t squeeze anything more out of the index-card conceit that passes for her character. Christopher Eccleston tries to express moral repulsiveness by baring his canines and refusing to blink. Grace Zabriskie does a brief but moonshine turn as Memphis&#146; mother, while one of the most interesting faces in the cast, Frances Fisher (as Duvall&#146;s wife), barely gets to open her mouth.

But it’s Nicolas Cage’s baling-wire performance that pulls the movie’s various energies together, and the guy hasn’t been this likeable in a long, long time. Gone (at least for now) are the pop-eyed histrionics that he began serving up in Leaving Las Vegas; he&#146;s finally playing to his costars instead of the groundlings again. And he&#146;s ticklish in the down-to-earth manner of Red Rock West. Having fully committed himself to the heist, Memphis pulls a favorite black leather jacket out of mothballs and dons it like a superhero&#146;s cape, crooning to himself with equal parts vanity and self-rebuke, "I am a…baaad…maaan."

Writer Scott Rosenberg hammers some blunted nuances into his material, as when Memphis and the ex-girlfriend, turned on by seeing one of the car owners having sex in front of an open window, acknowledge the sexual charge they get from their thievery. Gone in 60 Seconds indulges in a lot of fetishism, but it&#146;s centered less around the cars themselves than the high that can be gotten from stealing them. It&#146;s obsessed with the skills and gadgetry one needs to boost the high-priced machines, and apart from Memphis&#146; fixation on a &#146;67 Mustang, the gang is more turned on by thieving than driving.

60 Seconds has some of the sorry earmarks of typical Bruckheimer fare: a colorless villain, music that gnaws at the soft underbelly of quiet dialogue scenes, and a craven addiction to telephoto lenses that flatten the movie out into a giant TV show. But it&#146;s also less brutal, with nothing like the sadistic massacres that punctuated The Rock, and it doesn&#146;t have any of those Dolby-enhanced fireballs that knock you into a coma. It even maintains some of the original picture&#146;s discount-store charm with its funky, blue-collar settings &#150; these thieves still live on the street.

For 60 Seconds&#146; biggest surprise is that its action scenes are less developed than its characters. A couple of smash-and-grab sequences early on in the picture are fast and to the point, and are clearly meant as appetizers for the movie&#146;s main course. When the cops finally catch up to Memphis just as he&#146;s boosting the Mustang &#150; the fiftieth car on his list &#150; you know that this is what the movie has been building toward. But the ensuing chase is more frenzied than choreographed, and it&#146;s weighed down by some heavy constraints: as the hero, Memphis can&#146;t be responsible for harming any innocent parties, and the car has to be delivered in good enough condition to satisfy the bad guy. And Gone in 60 Seconds goes so stale in its last 10 minutes that it makes The Rock look like some experimental flick that&#146;s just way the hell out there. It&#146;s beyond depressing when you realize that all the sly plotting and colorful characterizations are only leading up to one of those tedious shootouts on a warehouse&#146;s grated catwalk.

Most mystifying of all, Sena and Rosenberg miss a golden opportunity when they hide the stolen autos from view by sticking them one-by-one inside a ship container. The decision robs us of our chance to see Memphis bask in the glow of his gathered booty &#150; the Aston Martin DB1 and the DeTomaso Pantera and especially the &#146;67 Shelby Mustang GT 500 that he worships and adores &#150; and to savor along with the master thief this capstone to his storied career. Even Toby Halicki knew better than that.