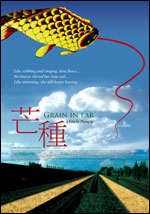 "Grain in ear" is a literal rendering of the Chinese for "season of harvest." What has ripened to the point of needing harvesting is portrayed in such an entropically minimalist way in director Zhang Lu&#146;s film-fest-friendly objet d&#146;art cinematique no one is much likely to care to find out. Lu&#146;s choice of setting and ultra sparse sets seem intended to understate, or ironize, or present a blank slate for the viewer&#146;s mind. The bleak, blank plains, austere, generic mining fields, cinder-block holes-in-the-wall suggesting a Maoist-Marxist vision of Mykonos villages loom menacingly as primary antagonists in this latter-day soviet-realist tale of revenge.

Cui (Liu Lianji) is a young mother raising her son Chang-ho on her own. Her husband has been imprisoned for having killed a man. Cui is an ethnic Korean living in China and thus suffers further discrimination as an undesirable ethnic. She is poor and marginalized and is forced to sell her home-made kimchi (a Korean pickled vegetable side dish) from an illegal bicycle-pushcart. Day in, day out, Cui peddles her wares along dusty roads along which pass nondescript factory workers, trudges along endless railroad tracks and struggles to raise her rebellious young son. She insists on Korean language lessons, while Chang-ho sullenly pouts for a TV set. The skull-numbing monotony of Cui&#146;s life, the film&#146;s pacing and the nearly non-existent color palette almost resemble David Lynch&#146;s cult classic Eraserhead, thankfully without the industrial pounding sounds.

Lu&#146;s stated intention has been to make an "anti-terrorism" film. For this director, terrorism arises not from the material world but from the human mind and heart, taking such forms as hate and revenge. Grain in Ear follows a turgidly consistent pattern, perhaps suggesting terrorism arises from the rigid constructs of state power or social hegemony. If the monotony of being a worker drone in a mass society is oppressive, Lu seems to be saying, just try being an utterly marginalized Other at the bottom of the heap of the bottom of the heap. The terrorist the counter-terrorist does make.

Into Cui&#146;s unbearably dreary life, dreary distractions enter. She meets another ethnic Korean, Kim, a married man who falls in love with her, while she seems to go along with the affair more out of a basic need for human connection. She also has a bit of luck when police officer Sergeant Wang, a regular kimchi customer who at one point impounds her illegal pushcart, agrees to grant her a seller&#146;s permit. When Kim&#146;s wife discovers her husband&#146;s affair, he denounces Cui as a whore, has her brought into custody, and there she is raped by a drunken Wang. Debased and humiliated, Cui is soon released again and resumes her kimchi business. Now, however, she has gotten a somewhat better location, catering at a large public dining hall on top of the mountain.

When her son is found dead near the train tracks, Cui slips over the line, her face, the film impassive as ever. Indeed, the stationery camera has been grating on the nerves for most of the film&#146;s running time. The film is entirely without human interiority, the sets and camera work serving as objective substitutes. As Cui begins her cold-blooded revenge, it is up to the audience to fill in the florid, gushing reds missing from the film&#146;s color palette. Lu offers only the tone-deaf, color-blind blankness. It is difficult to say whether this is an aesthetic strategy (micro-minimalism) or a political strategy to sidestep the censor&#146;s board.