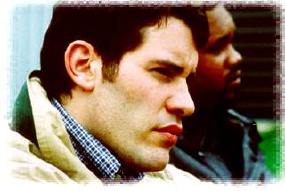 Movies have a hard enough time depicting the home or office without tripping over their own feet, so it&#146;s something like a miracle that a single movie could show the power struggles that go on inside both of them simultaneously. Laurent Cantet&#146;s Human Resources fuses the two types of pressure into a concentrated blast of steam, leaving its characters no room for retreat in any direction. The characters can&#146;t have a flare-up in the factory lunchroom without it rebounding on them at the dinner table that night; a lifetime&#146;s worth of resentments percolate into the simplest workplace interactions. Even worse, the narrowness of their lives binds the characters to the bosses whom they depend on for survival and a sense of identity. It&#146;s an outwardly normal-looking but inwardly harrowing world in which people stand constantly exposed before their relations and co-workers.

Franck Verdeau (Jalil Lespert) has returned to his village from school in Paris to intern as a management trainee in the same factory where his father (Jean-Claude Vallod) has worked for 30 years, and where his sister also works. Mr. Verdeau is an emptied-out husk of a man whose old-school belief in hard work has ossified through years of menial labor into a generalized distrust of all feeling. All day every day, for years and years, he&#146;s operated an automatic welding device that forces him stand on his feet, his nose inches from a hard plastic shield, working apart from everyone else. (He does this to give Franck the university education that will free his son from the life he himself ostensibly takes pride in.) At night he leaves his wife alone and retreats to his workshop, where he manufactures cabinets that (like their creator) are notable mainly for their lack of imagination. Whatever ideas and opinions he may have once held have long since fallen away from him, and he looks with sour suspicion upon those who do hold them&#151;including Franck.

Franck is an idealist who wants to improve the combative relationship between the factory&#146;s management and workers. His brains and good looks quickly put him under the wing of the factory&#146;s general manager (Lucien Longueville), who begins treating Franck like a son under the nose of his real father. Franck falls into a No Man&#146;s Land, separated from his friends by his Parisian education, from his father by the company hierarchy. His situation comes to a head when he accidentally learns that the factory&#146;s negotiations with the union for a 35-hour workweek are being used to hide an upcoming round of layoffs, and that Mr. Verdeau is one of the employees slated for termination. With his father&#146;s submissiveness suddenly resembling a form of suicide, Franck tries to awaken his father to the realities of their situation, and the attempt dredges up feelings that both men have spent their lives suppressing.

There isn&#146;t any soundtrack music in Human Resources, and most of its scenes last just long enough to make a simple point or two, yet the movie&#146;s world feels lived-in, complete. Cantet and his actors have an unerring sense of purpose, so that you always understand the proportions of the different tensions&#151;familial, professional, political&#151;flowing through any given scene. And the script (by Cantet and Gilles Marchand) smartly exploits common situations that most movies never think to include, as when Franck miffs his immediate supervisor by making an offhanded suggestion that breaches the chain of command. The boss exacts revenge by blithely rewriting an employee questionnaire that Franck has painstakingly prepared; Franck, a quick study, keeps his mouth shut and acts as if he&#146;s absorbing a business lesson.

That Cantet could keep the crosscurrents in his film flowing against each other so smoothly is especially remarkable considering that Lespert is the film&#146;s only professional actor. Cantet gathered the rest of his ensemble from unemployment agencies, and cast the laborers, managers, and union reps he found there in parts that correspond to their real life professions. Jalil Lespert we&#146;re sure to see again. His lantern jaw and direct gaze recall the young Depardieu, and he has Depardieu&#146;s wonderfully free diction that lets him talk a blue streak without a trace of self-consciousness. He&#146;s also a subtle actor who lets you know precisely what Franck is feeling even when circumstances force Franck to put on a smiling face. (When his boss ruins that questionnaire, Lespert expresses all of Franck&#146;s dismay by simply shifting his weight from one foot to the other.)

Chantal Barre, as Franck&#146;s mother, makes a fine human feather-duster. Mrs. Verdeau mourns her husband&#146;s emotional numbness, yet can&#146;t relinquish the habit, cultivated over years, of speaking with him in whispers. Danielle Melador, as the chain-smoking, obstreperous union rep, is the type of pushy, aggravating person whom you hate when you&#146;re opposed to her but adore when you&#146;re on the same side. Most memorable of all is Jean-Claude Vallod, who turns the marvelously sad Mr. Verdeau into a universal type. His external crust is hardly thick enough to hide the insecurity stewing just beneath it, and with his pot-belly and watery, unfocused eyes, Vallod makes timidity seem as much a physical condition as an emotional state.

Despite its leftist and neo-realist trimmings, Human Resources doesn&#146;t wear you out with its politics or aesthetics. It remains firmly focused on Franck&#151;the man who &#147;grew up in the firm&#146;s shadow&#148;&#151;and his attempts to close an unbridgeable gulf with his father. Laurence Cantet has made a mature, astutely observed film about cross-generational expectations, class shame, and the horrific overlap between people&#146;s professional and personal lives. It&#146;s a quiet masterpiece. – Tom Block