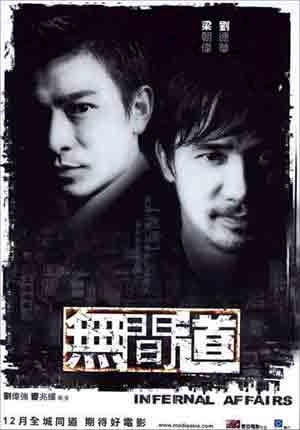 Infernal Affairs opens with triad boss Sam (Eric Tsang, Comrades: Almost a Love Story) praying at a Buddhist temple. Such ironies are abundant in this movie about a gangster mole in the police and a police mole in the triads who each become aware of the existence but not the identity of the other. Thus, they enter a race against time to ferret each other out before being discovered themselves. This high-concept plot yields such obvious suspense, it&#146;s a surprise that an entire movie hasn&#146;t been centered around it before (at least to this critic&#146;s recollection).

Of course the storyline is also ludicrous on the surface and Infernal Affairs doesn’t sidestep numerous weak contrivances to make it work. For example, with only a dozen candidates among the police being the possible traitor, why would one of them, who happens to be the mole himself, be chosen to lead an investigation to uncover the mole? But producer-director Andrew Lau (not to be confused with the movie&#146;s star, Andy Lau) and writer-director Alan Mak play it all very straight. Credulity is often stretched but not completely shattered here, rare for a Hong Kong film.

Ming (Andy Lau, Drunken Master II), a sergeant in the Criminal Intelligence Bureau, keeps tabs on police activity for mobster Sam. Yan (Tony Leung, In the Mood for Love) works as an enforcer for Sam, but he is really an undercover cop reporting back to CIB&#146;s Superintendent Wong (Anthony Wong, The Heroic Trio). During an attempted drug smuggling sting, Ming lets Sam listen in on what the police are doing through a cell phone while a wired Yan signals Wong through Morse code. As Sam and Wong keep countering each other’s moves even as they are happening, it quickly becomes apparent to them that each side hides a mole. Both Ming and Yan already live in constant fear of their covers being blown; now they have to deal with that being imminent. Both cop and criminal feel a bond with the men they serve on both sides and are ashamed of their betrayal. Furthermore, Yan has to deal with the fact that only Wong knows he is undercover and that other cops pose a possible threat to him. Lau and Mak utilize all of this to ratchet up maximum suspense.

Lau, who was the cinematographer for Chungking Express, and co-director Mak come closer to Hollywood flash than to the hyperkinetic flourish typical of Hong Kong action movies like Time and Tide and The Killer. While Tony Leung is cast in a similar role to the one he played in John Woo&#146;s Hard-Boiled, Infernal Affairs never soars to Woo&#146;s operatic heights. Its power stems primarily from the sly machinations of the plot, and when Lau and Mak try for something more by turning to metaphor, it is comically heavy-handed. For example, Ming keeps listening to a song that starts with the question, "Who are you?" and his girlfriend is writing a novel about a man with 28 personalities. What is similar to Woo&#146;s movies is that the roles of women are secondary to the point of evaporating altogether. Kelly Chen as a psychiatrist and Yan&#146;s love interest is totally wasted.

Infernal Affairs has twists and turns galore, but finally, one or two too many. Still, the ride along the way is always gripping, and the inimitable Tony Leung is never less than amazing to watch.