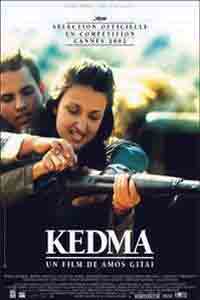 In Kedma, prolific Israeli director Amos Gitai attempts to shed some light on the unending Middle East conflict by focusing on the early days of a newly formed Israel. In a fictionalized account based on real stories, he follows the plight of displaced Eastern European Jews who arrive to the area via cargo freighter in May 1948, just days before the state officially was created. In taking this historical tack, Gitai, whose critically acclaimed works include politically and socially charged documentaries and feature films about his troubled homeland (Kippur, Kadosh) does succeed in portraying the chaos into which these newcomers were thrown.

His audience, too, feels a more subtle chaos. Call it confusion. The film not only moves slowly, it offers so little background information that only historians and the extremely politically conscious are likely to understand with any depth what&#146;s going during much of the film. But oddly enough, at the same time, the film&#146;s "message" (and the pertinent, unanswerable question it asks about the righteous owner of the territory), is treated with such a heavy hand, that it&#146;d almost be manipulative &#150; if it weren&#146;t ultimately boring.

The movie&#146;s title comes from the name of the vessel that transports these lost souls to Palestine. "Kedma" apparently means "toward the Orient." The opening scene is beautiful. Gitai is known for his languorous style, and the initial meandering shots of tense, scared, thoughtful, hardened but still hopeful Holocaust survivors piled up on the boat as it sails toward an unknown future are promising. Only a few of them speak, and their words are few, too. Rosa is coming out of exile from Siberia; Janusz survived the ghetto in Poland. Menahem is a young cantor, accompanied by his wife Yanka. They&#146;re among the travelers who embark from lifeboats onto a craggy beach (the terrain is rugged and desolate throughout) to find violence from the get-go.

A group of young Jewish defense fighters sent to help fends off some British soldiers. (Here&#146;s where the historical details begin to get difficult for those unfamiliar with the complex political development of the region.) But it&#146;s not long before the immigrants are split into smaller groups (who goes where is confusing) and they&#146;ll be asked to join their protectors in warfare against the Arabs. The defense fighters quickly offer up semiautomatic firearms and a lesson in operating them. Always call them "tools," never weapons or guns, the leader implores.

While wandering, one of the groups of immigrants comes across what looks like a village&#146;s worth of angry Palestinians who are fleeing their land, having been forced out by advancing Jewish forces. Though the irony of the situation is clear, the sequence isn&#146;t terribly illuminating. The Arabs and Jews get into a fight, shouting and waving, but finally passing each other without physical abuse. Not far away, combat does break out, and the immigrants are forced to participate. The feisty Menahem is wounded, and the Jews take a Palestinian farmer&#146;s donkey to carry him to safety, prompting the Arab to declare loudly and proudly that he&#146;ll never give up his land. The tone of his speech matches that of Janusz, the Pole who&#146;s wrecked by the death and destruction he witnesses so soon in a place where he thought he&#146;d be free. Wailing, he decries fate of the Jews.

But even though these men&#146;s prescient declarations do encapsulate a tragic reality, they (and the rest of the film) make little emotional impact, putting Kedma in the sad category of another dreary Holocaust film.