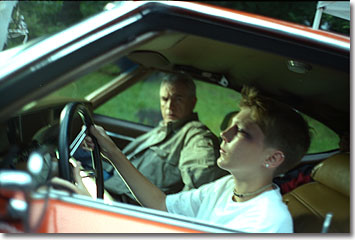 L.I.E. — local parlance for the Long Island Expressway, a never ending stream of traffic on the spine of Long Island, connectingeast and west, a barrier between north and south. It isn’t a toll road, but its constant rush of vehicles exacts its price in inevitable injuries and deaths. It took the life of Howie Blitzer’s mother and he has taken to climbing up on the guardrail of an overpass, balancing on one foot, and raising his arms as if he were about to fly/dive into the oncoming whoosh of cars and trucks. A suicidal impulse? A bit of adolescent self-assertion through daredeviltry?

Howie (Paul Franklin Dano) gets little comfort at his posh suburban home where his self-absorbed father, a crooked contractor, has taken up with a new squeeze. Emotionally adrift, it’s no wonder Howie falls in with some young local hoodlums with a predilection for breaking and entering, in which he willingly joins. He and his buddy Gary (Billy Kay) dream of running off to California and there is a hint between them of sexual energy. What Howie doesn’t know is that Gary is hustling his body for roadside sex with men.

Enter Big John Harrigan (Brian Cox), an ex-Marine into flashy cars (a bright red Cutlass with the license plate "BJ"), military music, and pubescent boys. He’s victim to a burglary by the boys and he wants the booty back. He’s also intrigued by Howie and starts a determined courtship aimed at winning his sexual favors. But Big John has a heart and as he gets to know Howie, he grows to care for him. He’s been explicit about his sexual interest, but he doesn’t force himself on the boy. And when Howie’s father is arrested by the F.B.I., Big John is the only sympathetic figure to whom Howie can turn.

Director Michael Cuesta, in his debut feature film, has dared to treat a child molester as a real person. He never condones Big John’s activities and he never hedges on the predatory aspect of what Big John does. But contemporary American society, which protects its young long past physical adulthood and tends to deny the sexuality of young people and limit their education on sexual matters, has utterly demonized child molestation. Fanned by the propaganda of the religious right wing, Americans have ceased to look at this phenomenon as a human perversity, perpetrated by real people. Rather, it’s been slotted into a black-and-white, no-gray-area issue and the guilty are as narrowed in public perception as the witches were in Salem.

The film’s reward for daring to break the taboo and realistically treat an unpopular subject is an NC-17 rating from the MPAA which will undoubtedly limit the theaters which will exhibit it and its box office success as well. Yet this is a film that looks at current social realities with edgy and convincingperceptivity and a refreshing lack of sentimental coating. It is, indeed, a moral film in the best sense of the word and might well benefit kids (assuming intelligent discussion with their parents) who are of an age where they need to know about these things for their own good.

(And there’s nothing here that begins to compare to the violence and sexual frankness of many of the current major studio releases which are not branded with the NC-17 rating.)

L.I.E. is not a perfect film by any means. It has some unnecessary loose ends and concludes in a rather rushed way that leaves unanswered questions– not so much a matter of deliberate ambiguity as marginally sloppy writing and editing. Still, it is, overall, an intelligent and thoughtful excursion into contemporary mores and it is enhanced by fine performances in the key roles.

Brian Cox (Rob Roy, The Minus Man) gives yet another of his deeply felt performances, capturing the bluff heartiness, the determined perversity, and the emotional vulnerability of Big John. He’s the guy you’ll hate to love. Young Paul Franklin Dano is already a veteran of Broadway, television and film and he perfectly catches that elusive, pivotal moment between innocent, needy childhood and experienced, independent manhood. With a mouth full of braces, he even makes a spontaneous recitation of poetry almost believable–it would have helped if the script had better prepared for this literary outburst.

The choice of the poem is entirely appropriate —