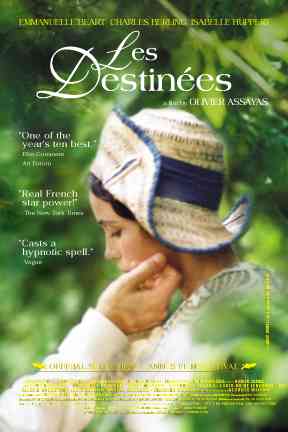 The novel can be found at

Director Olivier Assayas has more than a dozen productions in his filmography, probably the best known of which are Irma Vep and Late August, Early September. None of his earlier films, however, have been on anything like the scale of Les Destinees, a three hour long period drama based on the novel by Jacques Chardonne which was originally published in 1934.

The film follows the life of Jean Barnery (Charles Berling) over the first three decades of the 20th century, beginning when he is a Protestant minister in Barbizac, in the Charente region of France where Protestants, in the minority, feel a need to demonstrate the highest level of moral rectitude before the majority Catholics. Barnery suspects his wife, Nathalie (Isabel Huppert) of infidelity and sends her and their daughter off to live with his prosperous family, porcelain manufacturers in Limoges.

Pauline (Emmanuelle Beart) arrives in Barbizac to take up residence with her uncle’s family, the Pommerels, cognac distillers. She has the slightest flirtation with Barnery, but realizing the complications of his marriage, she returns to Paris. Barnery and Nathalie’s marriage deteriorates even further and he comes to understand his own contribution to the dysfunctional relationship. Remorseful, he signs over to Nathalie half of his share of the family porcelain factory, divorces her, and leaves the ministry.

Later, Pauline and Barnery marry and have an idyllic life in Switzerland. When Barnery’s uncle dies, he is recruited to return to Limoges to run the family business. The demands of business, the onset of World War I, and the Great Depression are all felt in the business and personal lives of the couple, but their relationship endures.

Somewhere in this overlong epic, there is a good movie, but Assayas makes the grievous error of trying to cover too much. The quality of his earlier films for which he gained admiration was his ability to portray the emotional subtleties of relationships, but in Les Destinees he introduces so many characters and speeds through the decades so overburdened with complicated plotting and banal dialogue that whatever insight he offers gets buried in passing.

Ironically, the best parts of the film are not the emotional insights, but the production values and the scenes of the life of the times. Assayas, like John Sayles, is adept at showing the work that people do; the scenes in the cognac distillery and the porcelain factory (molds, ovens, wheels, painting) are informative and have an appealing, grounded sense of reality. An early scene of a ball suggests the grand formalities of life amongst the haute bourgeoisie.

The three leads are amongst the finest actors on the screen today. Berling (The Bridge, Those Who Love Me Can Take the Train, Dry Cleaning) is intense and dignified here, only occasionally letting Barnery’s behavior directly reveal his vulnerabilities; at the same time he has a way of letting those same vulnerabilities subtly wash across his face like a cloud passing in front of the moon. Beart (La Buche, Time Regained) is luminous, both in her physical beauty and in the character she plays of a woman who can think independently and has the strength to sustain her own values. In contrast, Isabelle Huppert (The Piano Teacher, School of Flesh, The Swindle) who plays edgy, neurotic women better than anyone, plays the devoted but misunderstood wife with the rigidity of the dutiful Protestant minister’s spouse and the emotional availability of a stone. The script insists on following her destiny as well as Barnery’s, but it never suggests why she is the way she is.

Still, all the production values and good performances can’t salvage what feels like a slow train that can’t be stopped. The script is so busy spinning its overintricate plot, and introducing enough undeveloped minor characters to people five other movies, that whatever insight and subtleties that might be there get drowned in a morass of confusing and irrelevant detail..

(10952)
$4.79 (as of January 25, 2021 - More infoProduct prices and availability are accurate as of the date/time indicated and are subject to change. Any price and availability information displayed on [relevant Amazon Site(s), as applicable] at the time of purchase will apply to the purchase of this product.)

(2372)
$0.01 (as of January 25, 2021 - More infoProduct prices and availability are accurate as of the date/time indicated and are subject to change. Any price and availability information displayed on [relevant Amazon Site(s), as applicable] at the time of purchase will apply to the purchase of this product.)
related posts