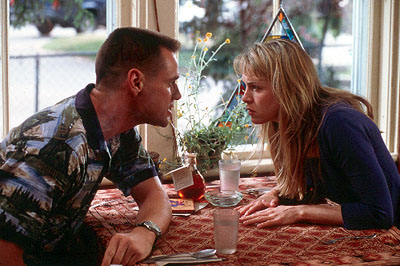 Bobby and Peter Farrelly (There’s Something About Mary, Kingpin) are responsible for some of the most appallingly tasteless – and hilarious – sight gags ever committed to celluloid. There’s no body function too private, no excretion too taboo for them to splash across a screen.

Yet for all their vulgarity, the Farrelly Brothers’ films aren’t particularly offensive. At heart, they’re rather sweet romantic comedies. Unlike the young John Waters – still reigning king of the repugnant gross-out, if only for the chicken scene in Pink Flamingos – there’s nothing remotely subversive about them. They’re not out to terrorize, just amuse, a couple of giggling twelve year old boys with a Super 8 camera and a bag of fake snot.

With Me, Myself & Irene, the Farrelly Brothers have stumbled onto a perfect metaphor for their schizophrenic movies. Jim Carrey plays Charlie, a timid Rhode Island highway patrolman and cuckold. He’s been the laughing stock of his small town for years, the butt of every joke. One afternoon he’s finally pushed too far, and the rage he’s quashed for years erupts into a new personality – Hank, a belligerent lothario who acts on all of Charlie’s repressed impulses. Charlie and Hank fight over possession of the body they share, all while competing for the attentions of Irene (Rene Zellweger), a tourist attempting to escape the criminal machinations of her ex-boyfriend. Carrey and Zellweger make a wonderful team: her double takes and dumbfounded stares provide the perfect launchpad for his lunatic flights.

Carrey’s Hank is an inspired comic creation, without question the best role he’s ever had. After his dismal, restrained turn as Andy Kaufman in Man on the Moon (he delivered an imitation, not a performance) he seems liberated, free to indulge his gifts for slapstick and manic aggression. The aftermath of his first transformation from Charlie to Hank is the funniest scene since the prom night sequence of There’s Something About Mary, a riotous onslaught of outrageous misbehavior and nasty sight gags.

Like Jerry Lewis’ The Nutty Professor, the film milks laughs from the transformation of a nerdy milquetoast into a creature of pure id. It’s less Jekyll and Hyde than Heckle and Jeckle, though, since all that really changes is Charlie’s attitude; there’s no change in bodies to match the new temperament. Hank’s every encounter ends in a fistfight, and Charlie pays the price when he wakes up.

The Farrelly Brothers are so sophomoric it’s easy to overlook the strength of their female characters. Despite the occasional burst of adolescent misogyny (there’s a riff on yeast infections here that’s as offensive – and hysterical – as Woody Harrelson’s sex scene with the elderly landlord in Kingpin), these are movies populated with smart, capable women. Most recent romantic comedies take their cues from Annie Hall and make their heroines cutely ditzy neurotics. Cameron Diaz’ Mary and Rene Zellweger’s Irene are drawn instead from the screwball tradition, balancing the idiotic hijinks of the male leads with their gravity and wit.

All the standard complaints against the Farrelly Brothers apply to Me, Myself & Irene. The film is funny in spite of its hamfisted craftsmanship: some gags misfire, there are limp, rhythmless sequences, and the plot doesn’t amount to much. By the end of the film, you’ll neither remember nor care who’s chasing Irene or why.

But none of this matters at all in light of the gutbusting hilarity of the material that does work. What other movie, after all, offers great jokes about Mensa, albinos, Enrico Fermi, misfiring urination and assault via dildo? Where else can you see a scene with a limo driver that manages to trounce ten taboos in under five minutes? Is there another movie this year with enough side-splittingly scabrous language to make Goodfellas look like a Disney film? Or a subplot stolen from an old Andy Kaufman bit that gleefully stomps on racial stereotypes? Me, Myself & Irene is a messy, proudly stupid assault on good taste and decorum. It’s also the funniest thing you’ll see this year.