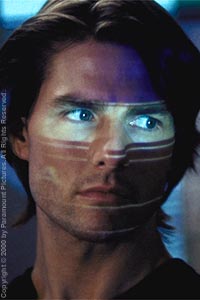 Brian DePalma&#146;s Mission: Impossible had a minimal number of kicks: a skewed-angle view of a staircase that looked like an M.C. Escher drawing, a sexy supporting performance by Vanessa Redgrave, and an energizing use of Lalo Schifrin&#146;s TV theme music. Such meager delights seem like downright riches compared to what director John Woo and screenwriter Robert Towne cough up in Mission: Impossible 2, an in-name-only sequel. This potent team passes up their golden chance to show Hollywood how to make a first-rate action movie, and settles instead for a coy and hollow parody.

The plot (or more accurately, the excuse for the movie) revolves around a manmade biological weapon called "Chimera" that&#146;s been seized by rogue agent Sean Ambrose (a lightweight Dougray Scott). Now Ambrose and his band of generic thugs need to get their hands on the bug&#146;s antidote in order to execute their convoluted plan to extort $30 billion in stock shares from the pharmaceutical company that invented the drugs. (The one thing in the movie that&#146;s recognizable as a Robert Towne touch is the villain&#146;s demand for stock options instead of cash.) IM agent Ethan Hunt (Tom Cruise) is given the assignment, should he choose not to fire his agent, to recruit beautiful jewel thief Nyah Nordhoff-Hall (Thandie Newton), and use Ambrose&#146;s romantic feelings for her to catch him at his game.

This task is complicated when Ethan and Nyah spend the night together, and suddenly Ethan has to face the prospect of being cuckolded by his archenemy. In case it isn&#146;t clear that this is a riff (or rip-off) on Alfred Hitchcock&#146;s Notorious, Towne has set a couple of scenes on a balcony and at a racetrack to drive the point home. And in case we still don&#146;t understand that we&#146;re watching what passes for irony in Hollywood, he&#146;s thrown in a farrago of other movie citations: to John Ford, and to The Third Man, and to earlier John Woo movies, and even (I believe) to West Side Story. M:I-2 is still kidding Hollywood conventions when its climactic motorcycle chase takes on the form of a Western horseback ride, then morphs into a tilt between medieval knights. There&#146;s no point or internal logic to any of these references; they&#146;re simply present in the shallow keep-&#146;em-watching style of Mel Brooks, as if our ability to recognize the most famous scene from The Last of the Mohicans is itself entertaining. Woo and Towne work to keep our heads nodding in recognition just to keep us from nodding off altogether.

Robert Towne, the man who in another lifetime gave us Chinatown and Shampoo (and made key contributions to Bonnie and Clyde and The Godfather), has written a script that&#146;s nothing short of disgraceful. Rather than reinvigorate his genre by transcending its limitations and absurdities, he&#146;s performed a whore&#146;s work, letting his howlers and plot-holes stand as they are, and repeating gimmicks &#150; such as the latex masks that the characters use to impersonate each other &#150; to the point of meaninglessness. The man who used to be a master of doling out plot information has turned in his eyedropper for a fire-hose, and blasts the audience with gobs of colorless exposition. And the villains he&#146;s concocted are a bland, incompetent lot whom Ethan outwits with the most obvious ruses &#150; Noah Cross wouldn&#146;t send these guys out for sandwiches. Towne&#146;s contempt for his own work is so palpable that right now he&#146;s probably ripping off a mask to reveal the face of Joe Eszterhaus.

As for Woo, it&#146;s hard to believe that at one time he was the most likely heir to Sam Peckinpah&#146;s mantle. Woo has admitted learning everything about his craft from Peckinpah films, and at one time he seemed to concur with Peckinpah&#146;s feeling that all the style in the world can&#146;t compensate for a lack of moral vision. Woo&#146;s moral vision was slight and repetitious &#150; he played with obvious Catholic symbolism and he overworked his doppelganger theme &#150; but it was there, it was something, and he seemed capable of deepening with maturity. If nothing else, the man could stage a gunfight: his Hong Kong movies were the only ones that really approached the kineticism of Peckinpah&#146;s violent showpieces in The Wild Bunch. And when Woo announced that he was coming to work in America, a lot of people hoped that he&#146;d give the industry a kick in the pants by reinventing the action film.

But instead he&#146;s turned into a hack, indistinguishable from the Michael Bays and Simon Wests. Not only has he lost whatever soul he once had, he&#146;s not even a good director anymore. The first half of M:I-2 is a slack and lusterless hour of cutesy talk and celebrity preening. (Both MI movies forgot that the TV show&#146;s defining trait was its rock-hard narrative drive.) Woo can&#146;t see that locations as varied as a flamenco dancehall, a racetrack, and a high-security pharmaceutical lab might have tangible and distinct atmospheres. He cares so little about his characters that he glosses over Nyah&#146;s sexual dilemma by never showing her having to kiss Ambrose, much less sleep with him. He can&#146;t even be bothered to match his shots properly. In fact, Woo is indifferent to everything except his empty acrobatic stuntwork and camera tricks, and even these are spare and undeveloped. His CGI effects have the lit-from-within fakeness of colorized movies, and his prolonged climax lacks both scale and imagination. And Woo&#146;s sense of tone is so far out of whack by now that his continuing stabs at operatic grandiosity play like senile camp, as when Nyah prepares to toss herself off a cliff while some New Age yodeling blares out from the soundtrack.

Tom Cruise is less caffeinated than usual (a big plus right there), and you can tell that he&#146;s in on the joke when the bad guy tells him, "The worst part of portraying you is having to grin like an idiot every fifteen minutes." Cruise observes the wasteland around him with such good humor that M:I-2 is the first time I&#146;ve ever felt sorry for him, or felt that he deserved more than he was getting. In the meantime, Thandie Newton is used only for her beautiful face, Ving Rhames frets over his clothes and transponders, Brendan Gleeson (as the drug-company CEO) sweats profusely and demands to know what this is all about, and Anthony Hopkins (as Cruise&#146;s boss) looks like he&#146;s being held against his will in two very short scenes.

Woo and Towne have tried to make a critic-proof movie, one whose trashiness they can always claim was deliberate and done in the name of fun. But they should have made an Austin Powers movie if that&#146;s what they wanted to make, and not suckered in people who might want something more than facile movie in-jokes and regurgitated motorcycle stunts. Shame on them. Shame on the both of them.