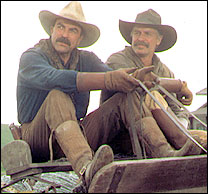 Tom Selleck, at robust middle-age, seems to be carving out a new career both acting in and producing westerns. An earlier Turner entry, Crossfire Trail, which Selleck produced and in which he starred, proved to be popular with TV audiences. Now TBS offers up another entry, Monte Walsh, and the results are, at best, mixed. Where Crossfire Trail was a relatively modest and unassuming effort, Monte Walsh is overlong at two and a half hours, over-cast with good actors (most of whom who are given little to do), and overblown with pretension.

In the Wyoming Territory in 1892, Walsh and his sidekick Chet Rollins (Keith Carradine) spend a hard winter tending cattle on the range. When they return to town, they learn that the ranch where they worked, along with others in the area, have all been sold to Consolidated Cattle, eastern corporate owners. Cal Brennan (William Devane) has been hired as the manager and he hires Walsh and Rollins on as cowhands. Cowboy work–independent, rugged, outdoors–is in contention with the urban/financial/business interests.

On the range, the cowboys’ values are observed. "Riding fence" is the dreaded fate of those who are too old to herd cattle. The railroad intrudes (smoke blowing, whistles shrieking to be sure the message of industry vs. ranchers is noticed) and there’s a fight between the cowboys and the railroad guys. Still, life on the range is romanticized–singing, smoking, a fire, and the handsome landscape. "All they got is freedom and pride and a set of rules," Brennan explains to the corporate accountant.

In town, they find their women. Walsh is paired up with a hooker, Martine (Isabella Rossellini), and Rollins romances the widow who owns the hardware store. When Rollins and the widow decide to get married, it’s another step towards the end of the old ways–marriage and cowboys don’t go together. "Nobody gets to be a cowboy forever, Monte," Rollins says. A scene is thrown in with Wallace Shawn playing Texas Jack Butler, a rodeo impresario in a ridiculous outfit, offering a job to Walsh, an expert bronc buster. When some of the cowboys are laid off, one will go bad, presumably in desperation, ultimately leading to a showdown with Walsh, the melodramatic climax of the film–and rather beside the point.

The theme, of course, is the end of the "old west," particularly as it affected the lives of cowboys. John Ford looked at the changing frontier in The Man Who Shot Liberty Valence; Sam Peckinpah looked at the same changes from the point of view of outlaws in The Wild Bunch; Sergio Leone’s Once Upon a Time in the West framed it in terms of ranchers versus the railroad. In all those films, though, the story was forefronted against the background of the changing/declining West. Monte Walsh plays as if the writers (a committee of four–beware multiple writers!) had made a list of cowboy attributes and how change was closing in on their way of life, and then grafted the story on to demonstrate those points. The result is episodic with so many barely connected bits and pieces that the narrative momentum is largely lost. A "seven years later" epilogue is completely gratuitous, rehashing points already made.

In its favor, producer Selleck once more delivers handsome western landscapes and a certain dignity to the role of Walsh. Carradine and Devane, both actors capable of much more, are never given much chance to shine in this material. The one genuinely notable performance is by Rossellini; she takes this classic hooker with a heart of gold and infuses the role with such warmth that the entire screen glows when she’s on. She expresses though the changing expressions on her face what the ordinary script barely suggests. And she makes you wish you were seeing her in a better movie.