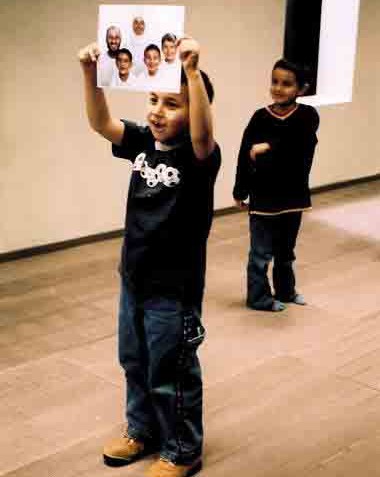 Included in the Human Rights Watch International Film Festival and selected for the 2004 Sundance Film Festival, the micro-minimalist documentary Persons of Interest is riding the wave of greater access to popular audiences afforded by the current renaissance of documentary film. Directors Alison Maclean and Tobias Perse sought to give voice, to give faces, to create a public record&#151;in short to account for at least a handful of the 5,000 or so Arab and Muslim immigrants who were taken into custody, and held without charge following 9/11, as part of the Bush government&#146;s "anti-terrorism campaign."

The documentary is spartan, filmed in a small, whitewashed space, which proves to be a sound studio set up in a New York City church. The filmmakers record interviews with former detainees, often with a spouse, a parent, or their children at their side, in clearly unrehearsed, even unpremeditated verite interaction with the interviewer off-screen. These "persons of interest"–so labeled by the U.S. Justice Department, whose field agents and affiliated agencies exercised arbitrary, even autonomous authority, in chaotic and devastating manner akin to those emerging in recent revelations in the Abu Ghraib prison scandal–were guilty of as little as having postcards of the World Trade Center on their wall (in a family-owned deli in Brooklyn) and at the most, apparently, as being a bona fide undocumented illegal alien.

The only thing all the detainees interviewed turn out to be guilty of is having an Arab name or having been born in a Muslim culture in the Middle East or South Asia. While the egregious violations of basic civil rights (according to U.S. law) or human rights (according to UN standards) of these "guilty" individuals might list toward the "too subtle" for law-abiding American citizens to be concerned about in the social and political atmosphere of the current Bush regime, the case of Syed Ali appears as if lifted from Nazi Germany. Born in Pakistan, educated in the U.S. (Ph.D. in criminology), Ali was a successful businessman and prosperous American citizen until a business partner turned him in to the FBI in retaliation over a business dispute. U.S. agents discovered "damning evidence" &#151; indicating support of flight training for terrorists (his son&#146;s flight-simulator computer game), financial backing of the terrorist attacks (about $1200 in foreign currency found lying loose in his house), as well as "grand larceny" (he collected a salary from his company) and a "suspicious" visit to the World Trade Center shortly before 9/11 (he had saved ticket stubs after taking friends on a tourist&#146;s visit). At the time of the interview, Ali had lost his business, his friends, and his house, following 105 days in detention. It’s a vivid example of the loss of civil liberties in the name of the "needs" of homeland security, a loss to which the American public has, thus far, seemed largely indifferent, passively allowing the administration to violate the very liberties they claim to be protecting.

Persons of Interest has value in its power as front-line journalism, snapshots of a moment in a time of domestic war. The aesthetic is almost makeshift, the directors emphasizing the windowless, closed set, letting the interviewees&#146; circumstances be revealed in the spontaneous interaction with the interviewer and their significant others. The interviewees are gathered together, at the conclusion of the film, to sit for a group portrait. By the time the film had been produced, many of the interviewees had been deported or re-arrested.

The directors try to reveal the hands of the invisible, powerful few who are pulling the strings and toying with the bewildered, betrayed, outraged and terrified innocent victims caught up in the Ashcroft police sweep. Persons of Interest is by no means "entertainment." It is timely, penetrating journalism at its finest. Whether, or what lasting relevance it will have as a historical document, only time and future turns of history can determine.