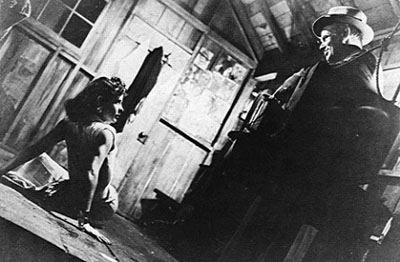 to the American Style

"Are you wavin’ the flag at me?" The question passes Richard Widmark’s lips in a tone that virtually defines the word "snark" 40-plus years before its first reference anywhere else. That’s one of the things that makes Pickup On South Street one of Sam Fuller’s best movies, and, by extension, one of the best noir films of the 1950s, period.

Fuller’s stripped-to-the-bone, low-budget dramas dealt in extremes of emotion as much as they did sex and violence. It often seems like his primary impulse as a director was to keep the audience awake. Movies like Shock Corridor, White Dog and The Naked Kiss only let up when they’ve got the biggest shock of all coming around the next corner.

Pickup On South Street follows a pickpocket named Skip McCoy, played by Widmark, who lifts a woman’s wallet on the New York subway. She was supposed to drop off an envelope (stored for safe-keeping in the wallet), without knowing that a) the envelope contained US military secrets on microfilm, and b) she was giving it to Russian spies. The FBI knew, though; they were tailing her. So the movie becomes a chase and battle of wills between the Russians, the FBI and McCoy.

The movie exists entirely within the criminal underworld. No straight citizens get speaking parts and the criminals aren’t condemned by the police, each other, or Fuller. This is a common enough gambit in the post-Tarantino epoch, but in the 1950s, it was a surprising choice.

Widmark’s best scene, which includes the line quoted above, comes when the NYPD and the FBI attempt to coerce him into giving up the microfilm. This, of course, requires him to admit being a pickpocket, something he’s loathe to do, as a three-time loser. The FBI agent appeals to his patriotism and Widmark responds with a scorn that’s like an ice-cold wind blowing through the room. His nihilism is complete and in 1953 that was quite shocking. In his autobiography A Third Face, Fuller talks about being called on the carpet by J. Edgar Hoover over this very scene. His response, of course, was that he was writing about criminals and wasn’t going to shirk the truth by soft-pedaling anything.

Special notice must be paid to two small roles: Thelma Ritter as the snitch, "Moe," and Richard Kiley as Joey, the traitor. Moe has more humanity than anyone else in the film and McCoy respects her, even when she sells him out. He knows that everybody’s got to make a living.

The violence in Pickup On South Street is minimal, which adds to the impact of what does happen. When Widmark punches female lead Jean Peters unconscious, we recoil backward. The same is true of a confrontation between Moe and Joey–it’s genuinely wrenching to see what she goes through.

Noir is a genre easily reduced to cliches in the hands of hacks. What Sam Fuller understood was that the opposite was also true–that working within the confines of genre pictures granted him room to take genuine chances and to create moments of power unequaled in many more respectable directors’ bodies of work.

The Criterion DVD edition of Pickup On South Street includes phenomenal extras. They include reminiscences from Widmark and Fuller (the booklet includes excerpts from A Third Face), and a French TV program on which the director goes through an entire sequence from the film, shot by shot, explaining what he was after. They’re as worth watching as the movie itself.