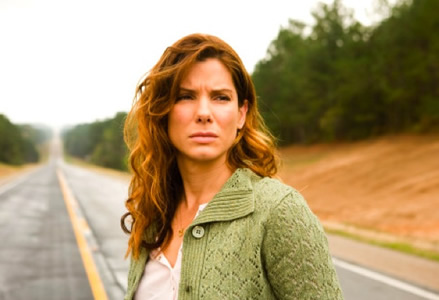 The prime directive of the Starfleet command forbids time travelers from doing anything that might interfere with the course of history. They knew what could happen once you start tampering with fate. Meddle with something over here, and who knows what unfortunate consequences it might trigger over there. And yet, the temptation to try to change the course of events is hard to resist once you find yourself bridging the space-time continuum, whether it’s for personal gain like finding out those winning lottery numbers, or to save your husband from getting run over by a four-wheeler. That is Sandra Bullock’s predicament as the suburban housewife Linda Hanson, who finds herself waking up each morning not knowing whether it’s tomorrow or yesterday, or whether her husband is alive or dead.

It all starts with almost sanguine conventionality. After being notified by police that her husband has died instantly in a terrible car crash, and spending the rest of the day in shock, Linda wakes up the next morning to find husband Jim (Julian MacMahon from TV’s Nip/Tuck) eating breakfast downstairs. Not yet realizing that she’s been time traveling, Linda chalks it off as a bad dream. But when husband Jim is dead again the next day, Linda starts thinking that maybe this isn’t a bad dream after all.

But it still may all be in her head, something the film tantalizes us with at first, and then abandons halfway through. It’s too bad, because the most interesting moments in the film are when Bullock seems on the very edge of insanity. The movie could easily have turned into a psychological drama about the descent into madness of a suburban housewife—something along the lines of “Images,” Robert Altman’s early (and sadly overlooked) portrait of a woman succumbing to her schizophrenic visions. Isn’t that a clear sign of emotional imbalance—imagining that your husband is dead, and then seeing him eating his Wheaties?

Alas, Bullock’s “visions” are not the result of a mental breakdown, but are exactly what she believes them to be—premonitions of the future. Once it is established that Linda is waking up every other day in the future, all other alternative scenarios vanish as one rather mundane plot point becomes clear—will Sandra be able to figure out how to save her husband from his fateful accident before it actually happens?

Unfortunately, wacky screenwriter Bill Kelly throws another spanner in the works when he introduces The Other Woman at Jim’s funeral—one of Linda’s flashforwards. Suddenly, the prospect of husband Jim’s infidelity—the evidence of which hits wife Linda just as squarely in the frontal lobe as it hits us—(whatever happened to character development?)—makes her think twice about saving her already dead husband. Once again, the film teases us with another potentially subverted look at suburban marriage—“If I let Jim die, is that the same as killing him?” Linda asks, the seed of wifely retribution already sown behind Bullock’s scornful eyes—only to abandon it for the mundane. Linda is not only perfectly sane (we are talking about Sandra Bullock here); but she is not even capable of letting her two-timing husband go on that fateful car ride (I could see Bullock enjoying this all too short-lived plot twist). Instead, we have a housewife who suddenly realizes she’s been taking her husband for granted, how much she really loves him, and how she must save her marriage, blah, blah, blah. Granted, the prospect of a spouse’s imminent death might rekindle even the coldest ashes—a little aid for those hardened cynics in the audience to suspend disbelief. And of course, there is the inevitable love scene, where passion and commitment are restored. Bullock and costar MacMahon enact this reunion with such gravely sincere conviction that it made saps like me think for a split second that maybe marriage is sacred after all.

Nah. It seems nothing is sacred in Hollywood anymore, not even the typical Hollywood happy ending. Screenwriter Bill Kelly must feel awfully clever trumping every convention Hollywood has instilled, from plot consistency to clarity of thematic intent, to the return to order that the happy ending stands for. Maybe he thought all that time travel gave him license to play God and change events and thematic purpose as he pleased—everything but the kitchen sink to swell a scene and get a thrill, comprehension be damned. But even Starfleet command knows what happens when you start meddling with history. And even M. Night Shyamalan knows that if you don’t stick to a game plan, all those thrills won’t add up to much more than one big plot hole. Someone should have figured out what this movie was really about before they even started. Sometimes it is better to begin at the very beginning.