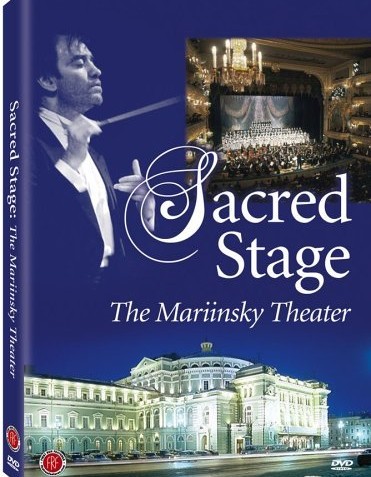 The heart of Russian performing arts, at least the ballet and opera, resides in St. Petersburg. A documentary, Sacred Stage: the Mariinsky Theater, focuses on this building itself, home of the Kirov ballet, opera company and orchestra. The question posed by the film-makers has less to do with the Mariinsky and its so-called sacred nature, however, and more to do with what is so amazing about it, that it managed to survive in the midst of such a turbulent history of political and social change.

Using the ballet, Sleeping Beauty and the opera, Boris Gudonov, as narrative foundations and metaphors for the Russian society at large, before and after revolution, the case is made that, like so many facets of world history, the existence of the Mariinsky, or at least the survival of it, has a lot to do with luck. One of Lenin&#146;s henchmen happened to love ballet, and convinced the new dictator that the old palace, along with the art forms that lived there, deserved to last.

Talking heads abound in this film, expressing opinions both fascinating and otherwise. Nothing is simple about Russian history, however, and things tend to become broadened into the kind of theses a professor might present to an undergraduate seminar. Sleeping Beauty, according to dance scholar Elizabeth Kendall, represents Imperial splendor in all its impermanent unlikeliness, while Boris Gudonov, discussed by Musical Director Valery Gergiev, is a clear depiction of post-Revolutionary gloom and despair.

Hope is offered in the presence of young artists passing along traditions, learning new parts, training each other, rehearsing and performing. Many of them clearly believe in the Mariinsky, see is as home, and choose to stay rather than seek their fortunes in the West. In staying they are attempting to sustain something vital and exciting in their own country, something that combines art and an opportunity to maintain their pride, especially after the economic turmoil created during the collapse of the Communist system.

Intellectually, the film-makers pose an interesting case, and the interviews with the brilliant Gergiev are interesting, especially when he is allowed to venture such opinions as "the evil side still dominates, but now it is 60-40….we are fighting back." Kendall, on the other hand, an American ballet expert, comes across, naturally, with as much passion as you might expect from a tenured department chair. Her telling of the Sleeping Beauty story, for nearly twenty minutes, sucks all the air out of the film, even with footage that contains beautiful dancing by the inimitable stars of the house company in performance. Someone should have fed her a little vodka.

There is old and new here, great artists, great traditions and a kind of paradoxical survival story. Still, unless you are especially interested in the Kirov, in ballet or in opera, this film will probably bore you. The survival story of an institution just doesn&#146;t carry the power of human drama, no matter how sacred that institution is.