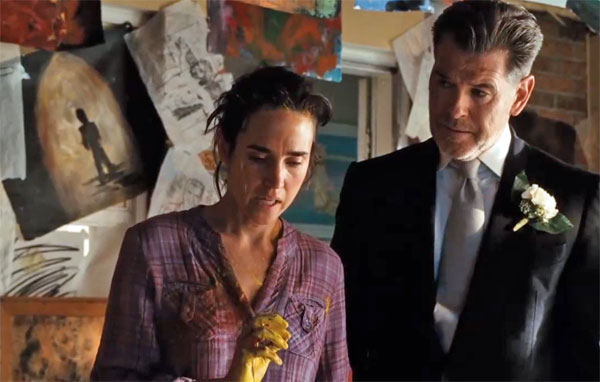 Given the astounding success of “The Book of Mormon” on Broadway, it would be fair to say the bar has been set rather high for religion-based satires this season. All the more reason to lament the huge squandering of talent in this lack-luster comedy based on the book of the same name by Larry Beinhart. With such a wonderful cast one would hope they would be afforded an opportunity to shine, despite the screenplay. However, such is sadly not the case.

The film opens with a debate between evangelical megachurch Pastor Dan Day (Pierce Brosnan) and atheist Dr. Paul Blaylock (Ed Harris). Great premise; perhaps the film might even get a little theological traction going. Alas, within the first moments of the film Pastor Dan randomly puts a bullet through Dr. Blaylock’s head, and born-again “zealot” convert Carl Vandermeer (Greg Kinnear) witnesses it. The point Pastor Dan wanted to make was that only in an atheistic world would a bullet randomly get put through Blaylock’s head. The incident is pregnant with possibilities, and yet it is played for one dumb laugh.

The plot ensues from the set-up now created: Pastor Dan has a lot of money riding on a brand new Christian City on a Hill community development in the middle of the desert. Pastor Dan, being a comic-book villainous evangelical attempts to frame patsy Carl. And a satanic enemy, Joe Hunt (Clarán Hinds) is seeking to blackmail Pastor Dan into a real estate partnership. Blaylock survives the bullet to the head (shades of Gabrielle Giffords) and it is only a matter of time before he will regain consciousness. So the film plays out against this time limit.

The megachurch’s IT specialist, Jerry Hobson (Jim Gaffigan), also a patsy, is drawn into the plot, siding against Carl. Carl’s wife Gwen (Jennifer Connelly) also believes her husband is guilty. The only friend Carl has is a security cop-Deadhead Honey Foster (Marisa Tomei), who believes Carl. Honey and Carl bond over a shared past-Carl used to be a drugged-out Deadhead too.

Alas, the film feels like shooting fish in a barrel. All of the evangelicals are awful people-hypocrites, gullibles, or some combination of both. The potshots are too easy. And the druggies are the heroes. The film reaches an unbearably complicated crisis knot, and then resolves, not in the plot’s unfolding, but in a premature denouement, in a series of “where are they today” captions.

If you really hate American evangelicals, and don’t care about decent filmmaking, this one is for you. Frankly, “Dogma” did a much better job of satire, while managing to have a similarly promising cast of characters actually deliver, and deliver some theologically thought-provoking moves as well. “Salvation Boulevard” is a waste of an awful lot of talent, and is a showcase for a lot of lame-brained writing. It would be a kindness to call it forgettable.