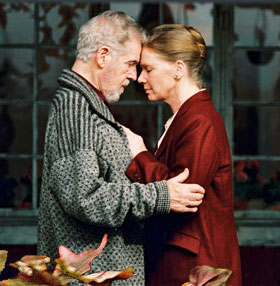 In 1973, director Ingmar Bergman made Scenes from a Marriage, a series for Swedish television that plumbed the relationship of Marianne, a lawyer, and Johan, a professor, following their ups and downs in love, adulteries and, ultimately, divorce. Bergman’s genius, abetted by brilliant performances by Liv Ullmann and Erland Josephson, resulted in a film of such powerful emotional impact that it was etched into the memories of a generation of moviegoers. (The series was released as a theatrical film the following year.)

Thirty years later, in his late eighties, Bergman made Saraband, once again as a television series later distributed theatrically. Marianne (Ullmann, still radiant in her sixties) spontaneously decides to visit Johan (Josephson, hale at eighty) at his isolated home in northern Sweden. They have been out of contact for all those interim years; Johan only now learns that one of their daughters is married and living in Australia while their second daughter is an institutionalized schizophrenic.

Now Marianne is the wise and sympathetic observer; the focus shifts to Henrik (Borje Ahlstedt), 61, Johan’s son from an earlier marriage, a music professor, and his daughter, Karin (Julia Dufvenius), 19, a gifted cellist. Henrik’s wife, Anna, died two years earlier and he remains in deep mourning, clinging to his daughter for support in a relationship that borders on the incestuous.

The film is divided into a prologue, ten numbered dialogues for two characters and an epilogue, a formal structure not unrelated to musical structures, such as those in Bach, whose compositions, among others, are used to telling effect during the film. The sarabande is a dance from the seventeenth and eighteenth centuries which, in its earlier history was highly erotic and later, in the French court, became rather slow and stately, perhaps here an accidental parallel to the shift of a romantic relationship with advancing age (although little in Bergman’s work ever seems accidental). There is an exquisite sarabande from a Bach suite for solo cello, which Karin plays at one point in the film at the request of her father.

Marianne and Josef’s initial conversation is largely expository, but starts to dig deeper when he confesses that he believes his life to have been "thoroughly meaningless and idiotic." "Was our marriage part of your hell?" she asks and gets an affirmative response. But these mature people understand that they have still a connection in friendship and they do care for one another.

On the other hand, Josef’s bitterness, glacially icy, is fully expressed in his talk with Henrik in which he is contemptuous, dismissive and insulting, utterly humiliating his son. Josef, ever controlling, believing he is helping Karin, attempts to manipulate her and set her future using his connections and financial means. Henrik has his own ideas about Karin’s future. Neither seems to have considered what Karin’s feelings are in the matter.

Bergman perceptively observes the subtleties of family psychology and creates dialogue that reveals complexities of character and relationships with riveting accuracy. He understands and uses the silences as well as the talk–what isn’t said and what is understood, even if unarticulated. His actors inhabit their characters as if in their own skin, a crucial element in the extraordinary totality of this work.

Every frame of Saraband, every line of dialogue adds the to richness of its portraits. With the pared down artistry that comes with the long experience of the mature filmmaker, Bergman delves profoundly into the universal need for interpersonal emotional connection and the concomitant vulnerability and hurt that invariably are attached.