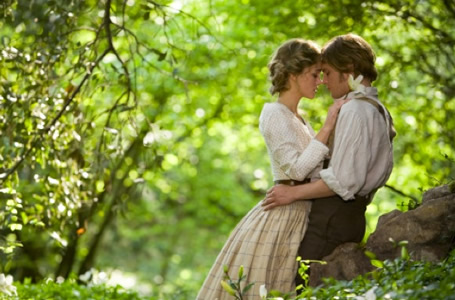 Those who have read the 1996 best-selling novel “Silk” by Alessandro Baricco may wonder why anyone would want to translate to film this spare, poetic and introspective story. But the Canadian filmmaker Francois Girard, whose background hints at a visionary’s risk-taking, chose to take on the task. Like a climber drawn to Mt. Everest, the filmmaker must have been drawn to the monumental challenge of giving visual expression to the complex and often contradictory emotional states of the human mind that the novel explores through the written word. Unfortunately, Girard never quite made it to the summit, although his attempt is worth noting. In its quest to do the opposite, “Silk” inadvertently offers an interesting take on the limitations of film as a visual medium.

Set in late nineteenth century France, the story follows the adventures of a young man, Herve Joncour, played by Michael Pitt, who, with his hair slicked back, is a dead ringer for Leonardo DiCaprio. The story begins with Herve at the crossroads into adulthood. In a scene that serves as a prelude, he meets and falls in love with a beautiful young woman named Helene, played by Keira Knightley. Following the mores of that era’s middle class, Herve marries Helene and prepares to join the military. His destiny changes, however, when the town’s silk factory faces ruin due to a disease that its silkworms have contracted. The mill owner (Alfred Molina) engages Herve to take a long and dangerous journey across Europe and Asia to smuggle new eggs from a silkworm grower in Japan. Herve’s first trip to Japan is a life-changing experience. He is captivated not only by the exoticism of this strange country, but also by the Chinese concubine of the Japanese overlord (played with piercing self-possession by Koji Yakusho) with whom he negotiates for the silkworm eggs.

Thus begins Herve’s inner struggle—his love for and sense of belonging to one country, one woman, and his obsession with another land, and another woman. Herve takes two more journeys to Japan, drawn almost beyond reason to this culture and its embodiment in this mysterious woman. Very little happens to warrant such longing; certainly the Chinese woman’s seduction of Herve—which consists of a glance, a touch of the hand, and a cryptic note declaring her devotion—seems too slight to deserve the consequences it inspires. And Herve’s attraction to Japan remains equally rooted in nothing more than lush images of the landscape. We are forced to believe in Herve’s obsession almost solely through the images Girard gives us, though he fills in the holes with a voice-over narration spoken by Herve. Here is where the film falters in its reliance on visual expression. Whatever the novel could do to explain the attraction of uncertainty and the unknown, versus the human need for comfort and certainty—Herve’s inner struggle—does not come across here. It’s as though Girard has provided us with visual cues, and we are left to do the rest of the work ourselves. If the audience fails to engage in the work, in the search for meaning, they will just end up perplexed at why Herve is struggling at all, looking outwardly so content with a beautiful and sexy wife who loves him so completely.

Those who have read the novel will already know the O.Henry twist at the end, which, interestingly enough, involves the recitation of a letter—the spoken word finally comes to the rescue. Nonetheless, whatever the surprise ending does to enlighten us about the wife Helene, it does nothing but confuse us even more about Herve.

Since I haven’t read the novel, I can’t really know how much the film’s weakness in character development is secondhand. But one thing is certain—the casting of Michael Pitt and Keira Knightley didn’t help matters. Michael Pitt, in a juvenile attempt to find depth through solemnity, looks out of his element. He whispers his way through his dialogue, perhaps trying to hide the fact that he doesn’t sound French at all, and even though Mr. Pitt is a gorgeous creature, and adds a provocatively easy sensuality to the erotic scenes in Japan, he doesn’t give us any sense of Herve’s introspective journey. And Keira Knightley, so spunky and untamed as Elizabeth in “Pride and Prejudice,” is quite frankly in the wrong movie. She has so little in common with the character of Helene, the wife who waits at home, and whose passion for gardening becomes her reason for being. In an unintentionally awkward scene, Miss Knightley confesses to Herve her dream of planting thousands of lilies, as far as the eye can see. Why does this fiery wisp want to be crouched in the dirt, tied to the earth with spade in hand rather than taking off to Japan herself? It’s like casting Adam Sandler in the role of Hamlet—the choice is so obviously a corporate Hollywood ploy to win a certain audience, and the decision only sinks the film into a confusing jumble of intentions.

For all its failures, “Silk” is still spectacularly beautiful; its breathtaking scenes of nature evoke an otherworldly atmosphere. Herve’s idyllic home in the French countryside, and his trek across Europe and the Middle East through Asia and finally Japan, allows Girard to soak the movie in scene after scene of luscious landscapes. One shot in particular, of a wooded grove bathed in bright green grasses, seems almost like a painting, something by Monet at Giverny. The interiors are also well photographed—dark, intimate places that prove stark contrasts to the adventurousness, the infinite possibilities, and the physical perils of the open landscape. The movie is at its best as a collage of environments representing states of mind. It seems obvious that it was this visual opportunity that lured Girard to this project. Perhaps his concentration on the sheer power of landscape blinded him from the opportunities of expression that come through dialogue, and the actors who deliver it. Or he expected the visual power to be enough, and it wasn’t.