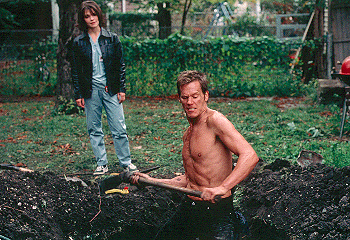 Children who communicate with the dead are turning up with increasing frequency at the multiplex these days. The surprise late summer hit The Sixth Sense continues to haunt theaters, and young star Haley Joel Osment’s extraordinary performance as the sad, whispery kid who sees ghosts everywhere he goes is sure to be remembered when year-end awards are dispensed. Now comes Stir of Echoes, featuring the similarly tri-named Zachary David Cope as Jake, a five-year-old boy much more at ease with his supernatural gift than Osment’s Cole Sear. Jake chats up the recently deceased with casual aplomb, which actually makes some sense: he simply doesn’t know he’s supposed to be scared.

Adapting a novel by Richard Matheson, writer/director David Koepp (best known for his Jurassic Park screenplay) finds a simple yet eerily effective way of letting the audience in on Jake’s special ability. When speaking to his otherworldly visitors, Jake addresses the camera directly. In effect, we become the ghosts peering in at a world where no one else can see us. This isn’t the only trick Koepp has up his sleeve, but it’s one of the few that doesn’t suffer from overfamiliarity. Most of the echoes in his film are stirred up from earlier, better movies.

Kevin Bacon stars as Jake’s father, Tom Witzky, a telephone lineman and self-described ordinary schlub, who nevertheless manages to pay the rent on an impressive Chicago townhouse. Bored with his life and half-drunk at a party one night, Tom calls his loopy New Age sister-in-law (Illeana Douglas) on a bluff and asks her to hypnotize him. She does so with unexpected success, and while mucking around in his brain plants a seemingly innocent suggestion for Tom to "open his mind." He does so with a vengeance, and soon his waking (and sleeping) hours are flooded with fragmentary visions, dreams and hallucinations. Like his son, he is able to see dead people, specifically an eighteen-year-old girl named Samantha who disappeared from the neighborhood six months earlier.

Before long, Tom is in the grip of an obsession. Much to the dismay of his wife Maggie (Kathryn Erbe), Tom begins speaking to invisible visitors, drilling holes in the floor and digging alarmingly large holes in the back yard. When questioned, he snaps at her, "I have to dig!" Anyone paying the slightest bit of attention to the story will have figured out what Tom is digging for long before he does, just as anyone who has seen The Shining will recognize the dysfunctional family dynamics of the Witzkys. At one point, Tom and Maggie are spooked when Jake speaks in a deep, distorted voice; one almost expects him to burst out screaming "REDRUM! REDRUM!"

Koepp previously directed 1996’s The Trigger Effect, a generally overlooked thriller that showcased his knack for generating jittery tension from seemingly everyday events. That talent is on display at times in Stir of Echoes, notably during a rowdy block party scene that brims with nervous energy and a palpable air of suspicion. Koepp also shows a facility for dream imagery &#151; at one point Tom floats on an easy chair through a cavernous, empty theater &#151; and with the help of cinematographer Fred Murphy, he gives the film a suitably grungy, twilight visual appeal. But the story sags in the middle, and a subplot concerning a cop who shares Jake’s ability (more shades of The Shining) eats up screen time without ever leading anywhere. Echoes also shares a common flaw with most contemporary horror movies: goosing every "shock" moment with over-the-top musical stingers and sound effects. When will filmmakers learn that it’s the quiet moments that are often the most unnerving?

Bacon has been a reliably solid presence in many an ensemble cast, which helps account for the "Six Degrees of Kevin Bacon" fad of a few years back. He leans a bit too heavily on the Chicago working class schtick here, but otherwise turns in a surprisingly effective performance as a man slipping slowly towards madness. Erbe does the best she can with the thankless "long suffering wife" role, but it’s Cope who really shines (no pun intended) as young Jake. There’s been no attempt to make his character lovable &#151; he’s a genuinely creepy little kid, so matter-of-fact about the world just beyond our line of vision that he’s almost scarier than the ghouls he hangs out with. It’s his blank-eyed acceptance of his fate that lingers in the imagination long after the special effects and audio trickery have faded into a distant echo.