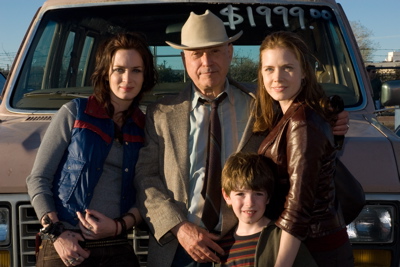 When Rose’s precocious young son, Oscar (well acted by adorable Jason Spevack, Hollywoodland, 2006), is ushered out of public school, Rose needs some quick cash to place him in a more simpatico private school.

So begins Rose and Nora’s big adventure — they start a recession-proof business — cleaning up crime scenes. Of course, there are complications, as the sisters face the detritus of violence, learn to work together and to explore their sisterly relationship. As the cleaning company evolves, so does their self-respect and their love and regard for each other.

The sisters’ novice attempts at their new business are both funny and sad. They struggle to acclimate to blood, odors and creepy-crawlies. Though the crime sites are not pretty, director Christine Jeffs (Sylvia, 2003) has approached them tastefully, given the circumstances. The emphasis is not on the blood, but on how the sisters react to it.

Amy Adams captures the essence of Rose Lorkowski. She shows us Rose’s superficial cheerleading persona as well as her underlying sadness and depth. Sunshine Cleaning gives Adams a chance to portray a multi-layered character and she succeeds admirably in capturing Rose’s complexity.

Initially, Rose views Sunshine Cleaning only as a means of finding tuition money. Yet as she grows the business (albeit in fits and starts), her self-esteem grows. She meets Winston (first-rate Clifton Collins, Jr., Capote, 2005), who becomes close to the family while helping the sisters learn the biohazard removal industry with its specialized equipment and requirements.

With Winston and her family’s support, ultimately Rose grows stronger and realizes that she can take control of her life.

The underachieving Nora is cajoled into working with her sister. And Nora drags her heels, at that. However, she finds herself engrossed in the lives and deaths of the victims, as she explores the intimate details of their homes and treasured possessions. She looks at a spousal murder scene and wonders if the couple loved each other.

Nora becomes so absorbed in one victim’s life that she takes it upon herself to notify the next of kin, to surprising results. Through this journey, she confronts her own family’s unresolved secrets and skeletons.

Alan Arkin is remarkable as Joe, the hapless Dad with a good heart. Arkin rarely smiles. As Joe, he sees his family’s troubles but feels unable to help. At the end of the film, after a seemingly insurmountable monetary setback for Sunshine Cleaning, Joe shows himself to be a surprisingly mature and selfless father.

Although each family member goes through a catharsis in Sunshine Cleaning, the catharsis is character driven and feels gradual and natural to the viewer. The film avoids being obvious, preachy or cloying.

With spot-on performances by an all-star cast and an original, creative screenplay by Megan Holley, Sunshine Cleaning is funny, sweet and full of insight. It’s a small film with a big heart.