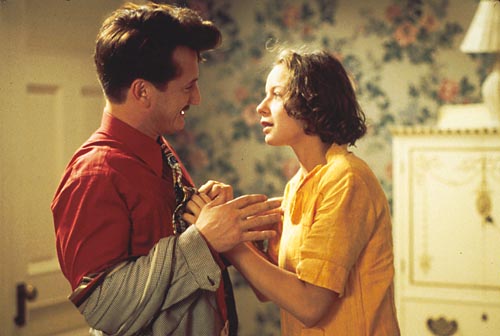 and His People – A Unique Collection of Photographs,

Woody Allen puts himself into his movies. Sometimes he plays the lead and enacts one alter ego or another, never himself in a literal sense, but so much of himself engrained into his characters that it can be difficult to know where the fictional character starts, where the real Woody ends. (Sometimes he has another actor do the job, most recently Kenneth Branagh in last year’s Celebrity.)

Certainly elements of the Woody Allen we know well from decades of press coverage come into play repeatedly – Allen the auteur, the artist; Allen the musician; Allen the husband; Allen the lover. And then there is the personality – the insecure overachiever, the New York-Jewish ironist, the self-deprecating egoist. Complex, contradictory, and very, very funny.

Sweet and Lowdown is Allen’s latest in what has become an annual gift-giving ritual for his fans; it wouldn’t seem like Christmas without a new release from Woody as part of the holiday festivities. The hero is Emmet Ray (a terrific performance by Sean Penn), a fictional jazz guitarist from the 1930’s, here given mocumentary treatment by Allen, complete with talking heads, speakers knowledgeable about jazz who relate bits of the history, deadpanning as if they were talking about, say, Duke Ellington on a PBS special.

Ray, as the story goes, was a great musician, second only to the great Django Reinhardt, whose music is heard in some of the cuts on the soundtrack, a soundtrack which (along with Buena Vista Social Club) is one of the year’s most delicious toe-tapping pleasures. The "second only" position is repeatedly alluded to throughout the film. Being number two allows Ray to have an idol, a peak of accomplishment to admire and stretch for, but it also means he isn’t number one. (Allen, of course, is known to admire the great European film makers – Bergman, Fellini. Whether his cumulative accomplishment in films ranks with their’s is one of his issues.) The running joke is that when Ray actually sees Reinhardt, he faints – which can be interpreted both as overwhelming emotion at the prospect of meeting the idol, as well as avoidance of knowing the idol, who almost surely would not match Ray’s fantasy.

Ray, too, is a kleptomaniac, a pimp, and a drunk whose pleasures are shooting rats in the town dump and watching trains go by. He shares those pleasures with the women he meets from whom he will take his pleasure and move on. Ray’s emotional availability or lack thereof, is entwined with his artistry in a complicated way and that becomes a central theme of Sweet and Lowdown.

He picks up a girl, Hattie (Samantha Morton), on the Atlantic City boardwalk (he gets her instead of her friend because he loses the toss of a coin). She is a mute and the parallel to the great Giulietta Masina cannot be accidental from Woody Allen. In a beautifully wrought scene, Ray, sprawled in bed in post-coital relaxation, plays his guitar; the camera slowly zooms in on Hattie. She is transported by his music and falls in love.

Inevitably, Ray betrays her love and moves on to other women. He marries beautiful Uma Thurman who treats him like the subject of a psychological treatise. The ins and outs of Ray’s emotional life and that of his art are not separable and the tale wends its way to a telling conclusion.

Complementing the excellent performances and memorable music, the production is lush in 1930’s costuming, the rich colors illuminated by the handsome cinematography of Zhao Fei (Raise the Red Lantern).

The bubbly lightness of the music and the giddy fun of Allen’s humor give Sweet and Lowdown the gloss of light comedy. As with the very best of comedy, though, it explores some real and complex issues. From Woody Allen we expect no less.

$2.78 (as of January 23, 2021 - More infoProduct prices and availability are accurate as of the date/time indicated and are subject to change. Any price and availability information displayed on [relevant Amazon Site(s), as applicable] at the time of purchase will apply to the purchase of this product.)
related posts