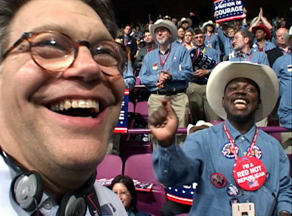 The 2006 edition of the South by Southwest film festival demonstrated perfect timing with its opening night feature. Mere days after Robert Altman received his honorary Oscar for lifetime achievement, the maverick director&#146;s latest effort, A Prairie Home Companion, made its U.S. premiere at Austin&#146;s historic Paramount Theater. As is evident from the title, the film is based on Garrison Keillor&#146;s long-running public radio program known for its rootsy music, folksy anecdotes and homespun comedy skits. When this project was first announced, it was a real head-scratcher for many; the sensibilities of Altman and Keillor would seem to blend together about as well as bourbon and buttermilk. Against all odds, the finished product is a seamless collaboration and a tasty concoction indeed.

Keillor plays himself, hosting the final broadcast of his show from the Fitzgerald Theater, which has been purchased by Texas businessmen and is about to be demolished.The familiar staples of the real radio program are all present, in slightly warped form. Keillor performs his Lake Wobegon monologues and fake jingles, Kevin Kline plays private eye Guy Noir, and Woody Harrelson and John C. Reilly are a hoot as singing cowboys Dusty and Lefty.Altman proves he hasn&#146;t lost a step as his camera prowls from onstage antics (Meryl Streep and Lily Tomlin bantering as they did during their Academy Awards appearance) to backstage intrigue (Virginia Madsen lurking as an angel of death).It all adds up to a comic souffle that could collapse at any moment, but never does.A Prairie Home Companion can&#146;t compare to Altman&#146;s greatest work, but few films can.It&#146;s simply a genial slice of faux-Americana that will leave you grinning from ear to ear.

A very different kind of radio show takes center stage in Al Franken: God Spoke.This documentary by Chris Hegedus and Nick Doob traces Franken&#146;s evolution from Saturday Night Live fixture to wry political commentator to (possibly) candidate for higher office. The launch of Air America, the liberal talk radio network designed as an alternative to the toxic spew of Rush Limbaugh and Sean Hannity, provides much of the fodder as Franken and his morning show crew travel to the 2004 Democratic and Republican conventions.Franken gets into debates with Hannity and other prominent conservative gasbags like Ann Coulter and Bill O&#146;Reilly, he addresses student groups and activist rallies, and occasionally entertains with a bit of impromptu slapstick.This is not exactly a warts-and-all portrait; although Franken&#146;s prickliness is not ignored, it&#146;s pretty clear that he&#146;s the hero of the piece.(This was particularly evident at the screening in left-leaning Austin, where hisses and boos accompanied every clip featuring the former local resident who now lives in the White House.) In the aftermath of the 2004 election (those not ready to re-live said horror show are invited to steer clear), Franken toys with the idea of running for the Senate in Minnesota.God Spoke leaves you hoping his wit and his excellent bullshit detector won&#146;t desert him if he goes through with it.

Documentarians Sarah Price (Caesar&#146;s Park) and Bradley Beesley (Okie Noodling) collaborated on one of the festival&#146;s biggest crowd pleasers, the self-explanatory Summercamp! Kids of all shapes, sizes and personalities come together for a few weeks of canoeing, campfires and crafting at Wisconsin&#146;s Swift Nature Camp.Price and Beesley are both fascinated with communities and the characters that inhabit them, and they&#146;ve hit the jackpot here.The counselors range from chipper to surly to bored, and their young charges run the gamut from geeky outsiders to soulful intellectuals, with no shortage of ADHD diagnoses among them.The filmmakers bring a child&#146;s view of summer alive with gorgeous saturated colors and strict attention to time-honored rituals and the secret language of youth. (Nostalgia neurons are activated en masse when the kids break into a round of &#147;Miss Susie had a steamboat…&#148;) Summercamp! is easily the feel-good movie of the festival, a treasure trove from beginning to end.

Given SXSW&#146;s origins and continued prominence as a music conference, it&#146;s no accident that concert films and rock and roll documentaries have always figured heavily into the movie schedule.This year&#146;s lineup showcased two very different rock docs: Jonathan Demme&#146;s latest foray into concert filmmaking, Neil Young: Heart of Gold, and the behind-the-music portrait loudQUIETloud: A Film About the Pixies. Demme&#146;s straightforward &#147;point the cameras at the band and stay out of the way&#148; approach dates back to Stop Making Sense, the landmark Talking Heads concert film.While that movie boasted a dynamic stage show and high-energy performance, Heart of Gold finds Neil Young in acoustic, introspective mode. Young draws largely from his latest album, Prairie Wind, only dipping into the back catalogue for his final few numbers.Casual fans may be lulled into drowsiness by the meandering quality of many of Young&#146;s new songs, but his heartfelt commitment to the material is hard to deny.

The Pixies film follows the iconic indie rock band of the 1980s from rehearsal halls to arenas on their recent reunion tour. While lead singer Charles Thompson has achieved some success as solo artist Frank Black, the rest of the band has struggled.Bassist Kim Deal is fresh out of rehab, guitarist Joey Santiago is scoring an independent film and drummer David Lovering is barely scraping by as a stage magician.The band members have never been particularly close; as one interested party notes, they may well be the four least communicative people on the planet.As a result, the fascinating loudQUIETloud plays a bit like the alt-rock version of the Metallica documentary Some Kind of Monster, as the Pixies try to hold it together through mental breakdowns, family tragedies and those ever-popular musical differences.

Finally, it wouldn&#146;t be South by Southwest without the contributions of homegrown talent.Korey Coleman, an Austin cartoonist, film critic and cable TV personality, makes his writing and directing debut with 2 AM, a worthy addition to the subgenre of up-all-night ensemble comedies. Somewhat reminiscent of Doug Liman&#146;s Go, the movie spins a triptych of tales out of a late night at the local pub, rewinding the clock to show us what happens when each character leaves the safety of the bar for the crazy night outside. The script is witty and clever and the low-budget look is enhanced with a few timely visual effects.Coleman&#146;s effort deserves wider exposure &#150; and the same can be said for many of the highlights of yet another stellar SXSW film festival.

$2.78 (as of January 23, 2021 - More infoProduct prices and availability are accurate as of the date/time indicated and are subject to change. Any price and availability information displayed on [relevant Amazon Site(s), as applicable] at the time of purchase will apply to the purchase of this product.)

(25526)
$23.81 (as of January 23, 2021 - More infoProduct prices and availability are accurate as of the date/time indicated and are subject to change. Any price and availability information displayed on [relevant Amazon Site(s), as applicable] at the time of purchase will apply to the purchase of this product.)

(13004)
$4.18 (as of January 23, 2021 - More infoProduct prices and availability are accurate as of the date/time indicated and are subject to change. Any price and availability information displayed on [relevant Amazon Site(s), as applicable] at the time of purchase will apply to the purchase of this product.)
related posts